Republic Day is almost on us, which means that the first long weekend of 2017 is here! This

is the perfect time for you to start planning on short getaways from the city. As part of our series where we’ve been bringing you holiday ideas for the Republic Day weekend, here’s another one. The Indian subcontinent is full of places that have played a crucial role in us achieving Independence. On the occasion of Republic Day, we’ve decided to bring you five destinations which are symbols of our long and dogged fight to become a free, sovereign, secular, socialist republic. So pack your bags and visit to these places to pay your respects to the thouands of martyrs who sacrificed their lives for us. Here’s our list of 5 National Monuments honouring the Freedom Struggle.
Ajay Kumar/flickr

The famous canon, Kadak Bijli, at the Jhansi Fort

It is difficult to hold back one’s emotion while looking down the sheer drop off the ramparts of the Jhansi Fort, from where Rani Lakshmibai jumped off on horseback, her little son tied to her back. The Rani may not have won her battle against the East India Company’s army but she will always be revered for her courage. An inspiration for the freedom fighters of India, she is a symbol of fearlessness even today. Take a walk along the sprawling 17th century fort, empty of its former glory after the Company’s soldiers rasacked it, except for the Ganesha and Shiva temples and the two famous cannons, Kadak Bijli and Bhawani Shankar. The Sound and Light Show held in the evening (English Show Timings: 8:45pm, November to March; 7:45 pm in summer. Hindi Show Timings: 7:30 pm, November to March; 6:30 pm in summer) portrays the life of Rani Lakshmibai and the 1857 War of Independence. Located away from the Fort is Rani Mahal, a small palace with colourful murals, now converted into an archaeological museum. The Government Museum (open 10am to 5pm; closed on Mondays and second Saturdays) also has an exclusive gallery on the Rani.

Jhansi is well connected by road and rail with the rest of the country. Nearest airport is at Gwalior, 98km away.

There’s UP Tourism’s Rahi Veerangana Tourist Bungalow (doubles from ₹1,600; uptourism.gov.in), as well as private hotels such as Hotel Ambience (from ₹1,800; hotelambience.in); and Hotel Shrinath Palace (from ₹1,245; hotelshrinathjhansi.com).

The memorial at Jallianwala Bagh

The bullet holes on the wall of this public garden in Amritsar, not far from the Golden Temple, are a grim reminder of how unarmed Indian citizens, gathered to celebrate the Punjabi New Year in 1919, fell victim to an indiscriminate firing order issued by a British officer because he thought the people had gathered for an uprising. Although the number of people dead and injured has been a matter of debate, the British government put the official figures at 379 killed and 1,200 wounded. Nearly 120 bodies were pulled out of a well in the park, which still exists. Poet Rabindranath Tagore, who was knighted in 1915, renounced the award as in of protest against the massacre. A monument of national importance, commemorating the incident was built in 1951. An eternal flame burns as a mark of respect. There is also a small museum.

Amritsar is well connected to north India by road, rail and air. Delhi is about 450km by road from Amritsar.

There are hotels and guest houses to suit every pocket. You could try Hyatt Amritsar (amritsar.hyatthotels.hyatt.com), or Hotel Ritz Plaza (from ₹4,700 doubles; ritzhotel.in), Hotel PR Residency (from ₹1,900 doubles; hotelprresidency.com) or Farmer’s Villa (from ₹4,500 doubles; farmersvilla.in), a farm-stay option.

The memorial at Dandi

Located nearly 60km from Surat in Gujarat, the Dandi sea beach on the Arabian Sea is a pleasant picnic area for many. But it was this place that saw the germination of the Civil Disobedience Movement, which was crucial to Indian’s march to Independence. It was at the salt marshes of Dandi, where, in 1930, Mahatma Gandhi undertook the Salt Satyagraha to protest against the British salt laws. From the Sabarmati Ashram in Ahmedabad, Gandhi began his march towards Dandi with a group of followers. By the time he reached Dandi, the crowd had swelled to thousands. At Dandi, he plucked a handful of saline mud and sea water to produce salt as a mark of protest. Gandhiji was subsequently arrested but the great wheel of civil disobedience had started rolling across the country that led to a mass movement against the British.

Dandi is a small beach town, about 60km from Surat. Surat is well connected by road and rail with Ahmedabad and Mumbai.

The INA Memorial at Moirang

This little town in picturesque Manipur, presided over by the tribal deity Thangjing and the land of the Lai Haraoba ritual dance, carved a place for itself in the annals of Indian history in April 1944, when the Netaji Subhas Chandra Bose-led Indian National Army (INA) occupied Moirang and declared independence from British India. The INA’s Colonel Shaukat Malik hoisted the tricolour in Moirang on April 14, 1944. Although the occupation by the INA was short-lived, it definitely hastened the process of the British leaving India. Located near the Loktak Lake, and about 45km from Imphal, the state capital, the history of INA and its occupation of Moirang is preserved in the INA Museum through letters, photographs, badges, currency, and other memorabilia.

Imphal is connected by air with Kolkata, New Delhi and other north-eastern state capitals.

Stay in Imphal at Hotel Bheigo (from ₹900 doubles; hotelbheigo.in),and Hotel Imphal (from ₹2,800; hotelimphal.com), among others. Manipur Tourism (tourismmanipur.nic.in) has a list of hotels in Imphal on its website.

The Cellular Jail in Port Blair

If only the walls could speak. A well-looked after National Monument today, the Cellular Jail in Port Blair, is a far cry from the grim prison that it was during British rule. Built in 1906, the original prison consisted of seven blocks of three-storeyed buildings spreading out from a central tower. Being banished across the ‘kaala paani’ (black water), as the sea route to the Andaman islands was then known as, was the most feared punishment. Incarcerated in the middle of the sea, the prisoners were at the mercy of the prison guards and the jail officials, who took immense pride in devising ways to torture the prisoners, who were mostly serving life sentences in solitary confinement. Netaji Subhash Chandra Bose visited the Andaman and Nicobar islands as Head of the Provisional Government of India on December 29, 1943. He hoisted the Indian tricolour at Andaman and christened the Islands Swaraj and Shaheed, respectively. The three blocks existing today have been converted into a museum (open from 9am to 12:30pm; 1:30pm to 4:45pm everyday except national holidays; ticketed entry, camera charges apply). The entrance block of the National Memorial houses a freedom fighters’ photo gallery and an Exhibition Gallery on the ground floor. An Art Gallery, a Netaji Gallery and a Library on the Freedom Movement occupy the first floor. Other galleries include one on the First War of Independence and an Old Photographs Gallery. A Light and Sound Show is also held on the premises (two Hindi shows daily on Tuesdays, Thursdays, Saturdays and Sundays at 6 pm and 7:15pm; on Mondays, Wednesdays and Fridays, the second show at 7:15pm is in English)

Port Blair is connected by air with Chennai, Kolkata, New Delhi and Bhubaneswar. Regular passenger ship services operate between Port Blair and Chennai, Kolkata and Visakhapatnam. The voyage takes about 50 to 60 hours in fair weather. 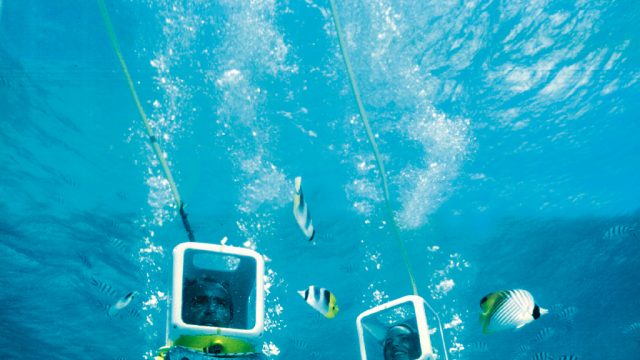 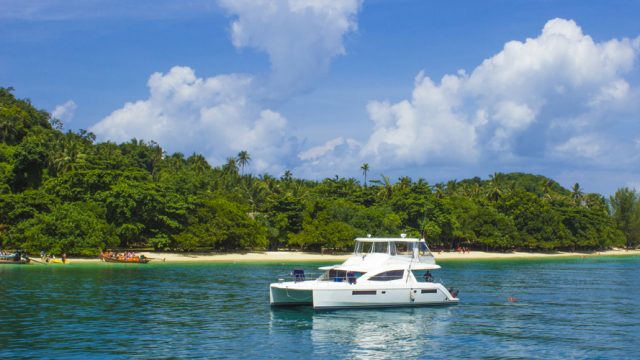 On A Catamaran Ride Around The Andaman & Nicobar 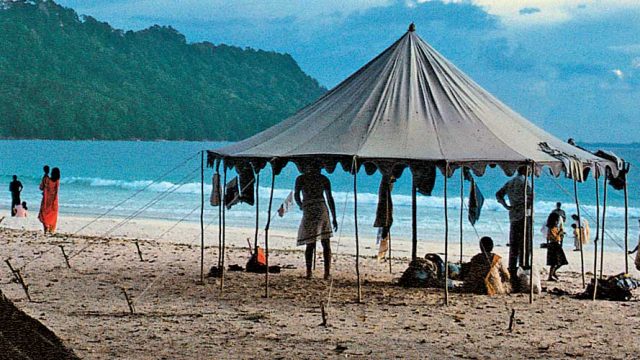 This island has pristine beaches, coral reefs and great scuba diving experience in store for you