A couple of hours after landing in Madrid, I clinked my first caña, that less-than-half pint ice-cold

portion of beer that is the soul of a Spanish tapas bar. It was local favourite Mahou, proudly produced in Madrid since 1890. Since it takes two to tango (and clink cañas), I had a companion in crime: Enrique Gonzalez Mendizabal, a warm, hulking Madrileño and the absolute, best guide I could have hoped for on my whirlwind tour of the Spanish capital.
Getty Images

Speedy Gonzalez walked with disarming vigour and I inevitably trailed him at my desi pace. He downed two drinks while I guarded my first. His knowledge of Madrid’s watering holes was as wide as it was deep. He was generous with his knowledge and he dispensed it speedily. This is the first pearl of wisdom he shared: “Tapas should always be free. You buy a drink, you get a tapa. You buy another drink, you get another tapa.” It’s another matter that we were paying for the excellent mussel croquetas accompanying our drinks, but then every house has its rules. The bar was inside the Mercado de San Antón, a historic market that first arose in 1945 and which was restored and reopened in 2002. It’s a posh place now, purveying exotic produce and ingredients and is lined with bars and restaurants offering an impressive variety of international cuisines. There’s even a terrace bar, offering splendid views of the Madrid skyline.

The Mercado is emblematic of the wave of gentrification gently sweeping Madrid’s old neighbourhoods. Chueca, the barrio we were in, is flirty, fashionable and openly gay, as the square-jawed guys in tight shorts distributing leaflets corroborated. It’s home to the Madrid Pride which, with its 1.5 million visitors, is the biggest gay party on earth.

A traditional taberna in central Madrid

Just off Chueca’s compact main square was El Cisne Azul, a modest taberna whose atmosphere was so atmospheric, it was dripping out onto the streets. The house speciality was mushrooms; indeed every conceivable variety of them. Over a caña or two of Alhambra, a craft beer birthed in Spain’s Sierra Nevada mountains, we shared the ’shrooms, choosing to stand and eat like Madrileños, although there was no shortage of stools.

After that, it was a haze of cervecerías, which are essentially delis with bars attached. Even a microbrewery slipped in quietly. Random memories of that wild night float up from the recesses of my beer-battered brain: Casa Alberto, which seemed as old as time, and where we quaffed vermouth on tap. Revellers pouring out onto the streets. A visit to the Asturias cultural centre, whose high point was a stunning natural cider. Hearty slices of lomo embuchado, cured pork loin.

At some point, we made it to Malasaña, which I was assured was Chueca’s grungier cousin, but, believe me, they have nothing on us. Malasaña is, of course, where La Movida Madrileña, a counter cultural movement, originated in 1980 during the Spanish Transition that followed Franco’s death. It was a general unshackling of Spanish life, a loosening of social and sexual mores. It was Spain coming up for air. The neighbourhood was so alternative, they used to jokingly call it the Independent Republic of Malasaña. It retains its edgy character to this day.

Inside the spiffy Thyssen-Bornemisza Museum

By night, Madrid may be a heaving crush of beautiful people partying till the wee hours, but, by day, it is one of the great art capitals of the world. The next morning, therefore, was given over to an entirely sober pleasure. Accompanying me was Marta Nuño, a colleague of Enrique’s. They could have been chalk and cheese, however. If Enrique was bristling with energy, Marta was poised and thoughtful. The one thing they had in common, though, was their passion for their subjects. When Marta described a work of art, her lips quivered with the same enthusiasm that Enrique reserved for a good tapa or tipple. We were visiting the Thyssen-Bornemisza Museum, or simply the Thyssen. It’s set on a scenic, tree-lined boulevard, the Paseo del Prado. Along with the Museo Nacionaldel Prado or State Museum (housing Europeanart from the 12th century onwards) and the Museo Nacional Centro de Arte Reina Sofía (20th century art, named after Queen Sofía), this semi-private museum, named after the baron who founded it, forms Madrid’s hallowed Art Triangle. The Reina Sofía’s most famous exhibit is, of course, Guernica, Pablo Picasso’s monumental, gut-wrenching reaction to the 1937 bombing of the eponymous Basque town during the Spanish Civil War. But it would have to wait for another day.

The Thyssen is said to fill in the gaps left by the other two museums, which is no mean feat by any standard. In the space of just one morning, I was privileged to view artists as significant and diverse as Van Eyck, Dürer, Caravaggio, Rubens, Monet, Van Gogh, Gauguin, Pissarro, Mondrian, Klee, Hopper, Dalí and Lichtenstein. Almost every great European artist is represented at the Thyssen. The bulk of the collection was bought by the Spanish government in 1993 for a sum of $350 million. Since 2004, the Baroness Carmen Thyssen-Bornemisza, a former Miss Spain, has lent paintings to the museum from her private collection, free of charge. She continues to be involved with the museum and is the one who chose the distinctive salmon pink tone of the walls against which hang some of the greatest artworks of all time. The Baroness’s collection, displayed in its own section, includes works by Canaletto, Monet, Sisley, Renoir, Degas, Gauguin, Rodin, Matisse and Picasso.

After being somewhat overwhelmed by this wealth of art, I had a drink to steady my nerves. And then, although it wasn’t on the agenda, I impulsively booked a ticket to the Prado on my phone, skipped the queue, and spent the afternoon feasting my eyes on the magnificent portraiture of Velázquez and the dark art of Goya.

Art always makes me hungry. Speedy appeared, as if on cue, and whisked me away, deep into the beating heart of Madrid. Of course, we hit the bars, but not before he’d pressed a box of violetas, those quintessentially Madrid, violet-flavoured candies, into my hands, a gift for my mother.

Madrid is a multiverse. Each strand will draw you in, and take your breath away. Over the course of the second evening, I had the unfortunate realisation that I had barely scratched the tip of the iceberg. Of course, I wasn’t going to let this niggling #FOMO get in the way of having a good time.

As the streets grew progressively narrower, we knew we were in older neighbourhoods. Some of these had existed since medieval times. Los Austrias, the old centre of Madrid, was built during the reign of the Habsburgs. Nothing prepares you for the shock and awe of the Plaza Mayor here, the city’s main square. In a bevy of establishments, there’s also a small bar lined with giant bull heads who all have the distinction of having lost their precious lives in a bullfight. Of course, it’s not always the bull who loses, as the gory images adorning the walls attested. We departed swiftly towards the Barrio de Las Letras, the literary quarter whose most famous resident was Miguel de Cervantes. Today, it’s a lively and somewhat touristy area, bursting with bars and restaurants. On the Calle Cuchilleros, we went into Sobrino de Botín. Founded in 1725, it is one of the oldest continuously running restaurants in the world. Goya used to be a waiter here before being accepted into the Royal Academy of Fine Arts. The restaurant is known for its speciality of cochinillo asado (roast suckling pig). The iconic dish finds mention in the last few pages of Hemingway’s novel, The Sun Also Rises. Also popular here is the sopa de ajo, an egg poached in chicken broth and sensibly fortified with sherry.

It was a comforting dish, and a nice way to round off my oh-too-short sojourn in Madrid. I had managed to peel back only a few layers, but what little I had seen, had blown me away. Even though I was heading to other enticements in the northwest of Spain the next morning, I started plotting my Madrid return almost immediately. Now what’s that tablao place you mentioned, Enrique?

GETTING THERE
Several European carriers offer one-stop connections between India and Spain (from approx. ₹35,000 return in economy class). I can personally recommend Turkish Airlines. The connections are convenient, with short stopovers, and Istanbul airport, with its bustling bazaar like vibe, is great fun to transit through. If you’re flying business, do check out their gorgeous CIP Lounge.

WHERE TO STAY
I stayed at the beautiful Hotel H10 Villa de la Reina. A boutique hotel set in a carefully restored building dating from the early 20th century, the hotel enjoys a great location on Gran Vía (or ‘Great Way’), known for its upscale shopping and nightlife. My room, tastefully done up in soothing pastel shades, opened onto a huge private terrace. Many of Madrid’s main attractions are a short walk away. The hotel also has a bar, a restaurant and 3 meeting rooms (from €140; h10hotels.com). Fancier options include the NH Collection Madrid Paseo del Prado (from €223; nh-collection.com) and the Mandarin Oriental-managed Hotel Ritz (from €265; mandarinoriental.com).

Top attractions include the museums in the Art Triangle, the Royal Palace, the Plaza Mayor, the Puerta del Sol and the Retiro Park. Football fans will want to pay homage to the Real Madrid stadium.

A tapas bar crawl is a great way to get to know a city like Madrid, but it helps to have a knowledgeable local in tow. Look no further than Mad Snail Travel, run by Enrique, which offers intimate, private tours of Madrid on a variety of themes (madsnailtravel.com). They also know the best flamenco places in town (next time, next time!).

TOP TIP
If you need an airport transfer, try welcomepickups.com. Their English speaking drivers offer great introductions to the destinations you’re visiting, including Madrid. On my way in, I had an American cabbie, possibly Madrid’s only one. It’s the only time I’ve regretted the shortness of the ride from the airport into town! 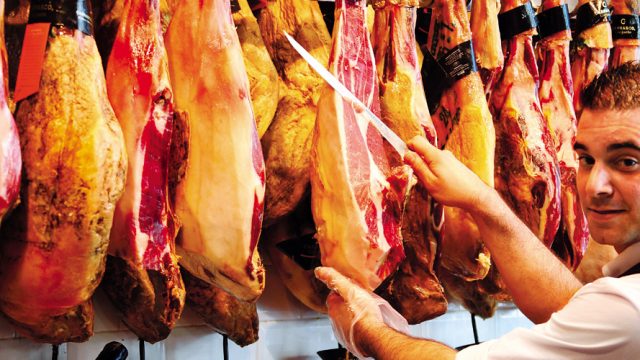 Spain offers a cornucopia of tasty delights for the adventurous palate 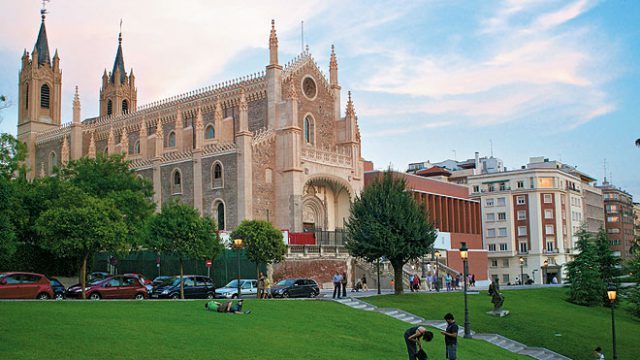 Spain: Day and Night in Madrid

The bustling city of Madrid is a cornucopia of history, art & culture, and vibrant nightlife 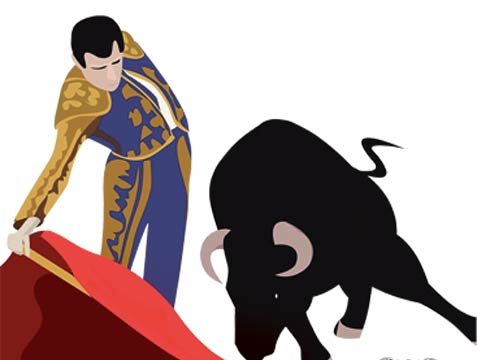 The fighting bull–el toro–is regarded with respect in Spanish bullfight. Read on to know more about the sport and the tragic gallant beast