This city is blessed with a river and several lakes cradled by the Zabarwan Hills. Even after

years of insurgency, army occupation and three seasons of frenetic tourism, Srinagar hasn’t lost its charm. It foregrounds that rather indefinable central Asian air and resplendent wooden architecture that is a product of the coming together of Islamic art and older Kashmiri influences. To the outsider, already drunk on pherans, yakhnis and shikaras, it continues to feel like a medieval city by the Jhelum. During the Mughal era, Srinagar was a favoured summer retreat for royals who left behind picturesque gardens. Then came the British, who were not allowed to buy land here. Hence, they made local boats into the now legendary houseboats. The city was the summer capital of the erstwhile Jammu kingdom and continues to be so of the state of Jammu and Kashmir.

Dal Lake
The famous Dal Lake has been a muse to many a poet. The beautiful shikaras that float around, the legendary houseboats that have become a defining feature of the lake and the myriad flora and fauna that beautify the lake have been eternalised by the numerous post cards and Bollywood films that have been shot here. With a surface area of 21sq km, the Dal lake and its boulevard are the biggest tourist attraction in Srinagar. When here, you can hire shikaras and houseboats for rides.
Shikara rides Rs.500 per hour

Nehru Park and Nageen Lake
This touristy island on the Dal Lake has been converted into a park by the tourism department and hosts a café. Speedboats, water skiing and surfing are on offer here during summers by private operators. Water sports are also organised on Nigeen Lake, opposite the Nigeen Club.

Floating Post Office and Museum
A real charmer, this post-office-cum- philately-museum fits into a largish boat that is moored right on the boulevard. You can step into it for free and drink in the lovely magnified representations of Indian stamps through the decades. Pick up the perfect souvenir – picture postcards or saffron – from here.
Timings 10.00am–4.00pm; Closed Sunday

Shankaracharya Hill
Reached via a winding wooded road from the boulevard that yields ever lovelier views of the Dal and the city below, the peak of Shankaracharya Hill is a good 1,000ft above the lake. You need to climb hundreds of steps to reach the temple perched atop the hill. This Shiva temple is associated with Adi Shankaracharya (788–820 CE), who is said to have meditated here. This hill was originally called the Takht-i-Suleiman (Throne of Solomon). Later, when Adi Shankaracharya stayed here during the course of his travels, the hill came to be known after him. The temple is believed to be a 6th-century Jyeshtheshvara temple built by King Gopaditya, though many renovations have been done since. You can also do a scenic 40-min trek up to the Shankaracharya Hill, starting from behind Burn Hall School.
You must leave phones and cameras behind in your vehicles

Jama Masjid
Situated in the heart of the traffic-ridden and chaotic old city, the sudden sight of the Jama Masjid’s gracious expanse, its pale stones and tall spires can take your breath away. Originally built by the infamous Sultan Sikandar Butshikan in 1394, and much enhanced by his son, Sultan Zain-ul-Abidin, the Jama Masjid was damaged by fire thrice, each time being rebuilt by the reigning local sovereign. It was reduced to ashes again in 1620, and rebuilt by Jehangir and Shah Jehan, only to burn again in 1674. They say when the news reached Aurangzeb, he declared that the mosque could always be rebuilt, but displayed a tender concern about the aged chinars in the vicinity. Aurangzeb then built the monument that you see now. The most remarkable feature of the masjid are the 378 pillars of deodar wood that hold up the wooden ceiling, beautiful in their uncarved simplicity. The courtyard is a pleasant space constituted by a fountain, lawns, chinar trees and a backdrop of the Hari Parbat hill.
Entry Free

Khanqah of Shah Hamadan
The most beautiful of Srinagar’s old buildings, the Khanqah is located on the right bank of the Jhelum River. The 14th-century Sufi saint Mir Sayyad Ali Hamadani left his native Iran to avoid Timur’s oppressive reign and visited Kashmir thrice. He was such an energetic proselytiser that many credit him with the spread of Islam in Kashmir. It is said that he converted 37,000 locals within a few days. The building you see here is a beautiful melange of wooden carvings, colourful green-and-yellow paintings on the walls and a dominant spire on top. Non- Muslims (and women) cannot enter the main hall, but are allowed to walk up to the door and look in through a window.
Entry Free

Pathar Masjid and Zaina Kadal
For the best views of old Srinagar, you should walk over to the new Zaina Kadal bridge at sunset and capture the Jhelum River as it winds past the old domes and wooden structures, under the old wooden bridge, and past the Khanqah of Shah Hamadan. Close to the Zaina Kadal is Noor Jehan’s Pathar Masjid. Rare for Srinagar’s monuments, this one was built using limestone. Its patroness then managed to get the mosque bad press by saying that it had hardly cost more than her jewelled shoes. The scandal was so great that the horrified local clergy boycotted it and the mosque has suffered many indignities over the years, the least of which are a few bullet holes from an ‘encounter’. It is nonetheless an impressive building with a pleasing garden that is worth visiting.

Shalimar Bagh
Commissioned by Jehangir for Noor Jehan in 1619, Shali mar Bagh is a four-terraced spectacle of chinars and water courses with an exquisite hill as its immediate backdrop. An October visit among the flaming autumnal chinars is perhaps even more attractive than the floral riot in spring. The most interesting element in Shalimar is a baradari, a summer house, with stunning black marble pillars from Pampore and gorgeous painted ceilings. Jehangir had named his garden Farah Baksh (delightful); he loved Kashmir so much that he and Noor Jehan visited Srinagar at least 13 times. Shah Jehan had the garden extended, the Pathan and Sikh rulers of Kashmir used it too, and under Ranjit Singh it also hosted European visitors.
Entry Adults Rs.20; Children Rs.10; Timings April–October: 9.00am–sunset; November–March: 10.00am–sunset

The Hazratbal shrine, famed for housing a strand of the Prophet’s hair

Hazratbal
You can reach Hazratbal by road or, preferably by a long shikara ride. The mosque is located on the far side of the Dal, its beautiful stark white marble reflecting in the waters of the lake. It is the only domed mosque in the Srinagar area. Hazratbal is a very important shrine. It holds a sacred relic – a strand of Prophet Muhammad’s hair, referred to as the Moi-e-Muqqadas. Note that ‘bal’ has nothing to do with ‘baal’ or hair; it’s a common suffix added to place names in Kashmir. The legend goes that the hair was brought to Bijapur in Karnataka by a descendant of the prophet. These descendants, who had fallen on hard times, sold it to a Kashmiri business man, Nur-ud-Din Eshai. Aurangzeb then seized it, but later restored it to Eshai. The Moi-e-Muqqadas reached Kashmir in 1699 and Eshai’s daughter, Inayat Begum, built the shrine for it.
Tip: Try the bazaar around the mosque for authentic Kashmiri street food

Hari Parbat and Rainawari
The hill of Hari Parbat is crowned by a 16th-century fort of the same name. Historians are generally dismissive of this structure as ‘commonplace’, ‘poor’ and ‘mean’. But seen from the intended perspective – that of the cringing subject – it is extremely impressive. The Afghan ruler Shuja Shah Durrani built the fort, which dominates the city from almost any angle, an omniscient symbol of power. This has not been lost on the Government of India, which preserves the heights of Hari Parbat as a panopticon for the security forces. Local tradition also acknowledges the hill as a site of power for more ancient and occult reasons. It is said that back in the mists of time, the entire valley used to be a massive lake, inhabited by the malicious demon Jalodbhava, until the goddess Sati dropped a pebble on his head. The demon was crushed when the stone expanded into a mountain – Hari Parbat. 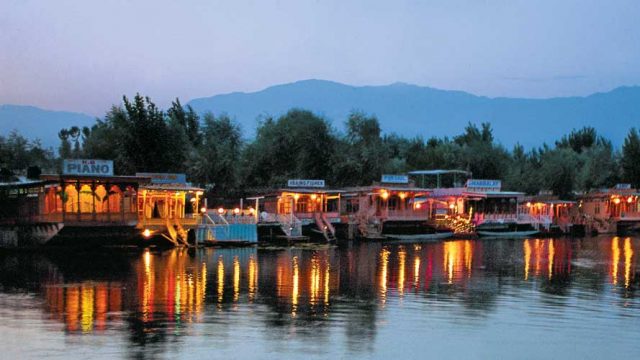 Srinagar: City of Wood and Water

Srinagar blends together the tints of nature, beauty, harmony and romance 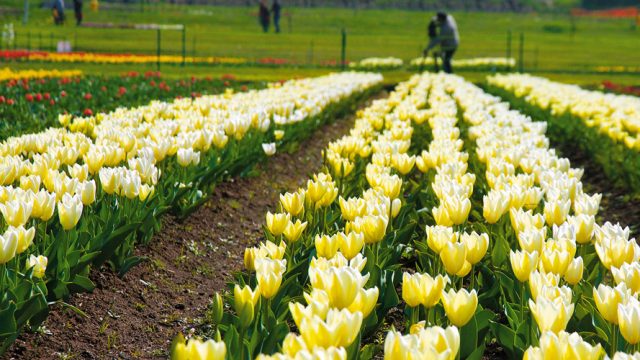