On the joyous occasion of India’s 71st Independence Day, we decided to leave behind the tried and tested

and venture forth into offbeat, quirky, insightful and fun new destinations that you can visit from your city. Know your country better, and know what makes it special. The best way to do so? Travel.

To help you plan a quick getaway, we’ve been coming up with long weekend plans for quick getaways from your city. Today, we bring you some offbeat weekend plans out of Chennai. If you’re done with a jaunt to Pondicherry or Mahabalipuram, then look no further than these destinations. From the endless panoramas of the Horsley Hills to the heritage of Chidambaram and a few treks in the Nilgiris, here are 5 Weekend Breaks from Chennai!

The view from Horsley Hills

Horsley Hills
There are at least three things that make a visit to Horsley Hills in Andhra Pradesh an ideal Independence Day weekend getaway—lush, scenic surroundings, charismatic British Raj-era bungalows and good weather. Leave bustling Chennai behind and head north-west for 276 km to these highlands located 4,152 ft above sea level. Here you will find the usual tourist skitter scatter, but also a bunch of worthwhile attractions. Take, for instance, Gali Bandalu (lit. windy rock). True to its name, it is a perpetually-windy rocky slope, known for its splendid hill vistas and sunset sights. Similar is Gurram Kond (lit. horse hill), approx. 40 km from Horsley and between the towns Madanapalle and Raichoti, which has a small fort at its foot. Then there are the forests around Horsley; explore them both on foot and in a vehicle. Pilgrims can visit the Yenugu Mallamma Temple near the hills, which is a relic to goddess Mallama. Stay options: AP Tourism’s Haritha Hill Resort Horsley Hills (from ₹1,250; aptdc.gov.in) and Horsley Hills Holiday Homes (from ₹2,000; horsleyhillsholidays.com).

The sea lashes against the 14th century shore temple in Tranquebar

Sometime in the 17th century, the Danes anchored their ships along the coast of Tharangambadi or Tranquebar in Tamil Nadu, soon establishing their first ever presence in India as a colonial power. For the next two centuries, the village, today a town, acquired a very unique Danish-Indian character that is still visible in whatever remains of the townscape and its architecture. One must take the famous East Coast Road (ECR) towards Puducherry to reach the hamlet, located 279 km south of Chennai. An essential highlight is the Fort Dansborg, just by the beach. It is distinctly European, complete with ramparts and an arched gate. Other gems include the Danish Governor’s House with its colonial features, the Zion Church, streets such as King Street and the many ruins. If you wish to step back even further in time, you oughtn’t to miss the Chola temple at Thirukadaiyur and the remains of the Pandya Temple. Stay option: Bungalow on the Beach, owned by Neemrana, is an 18th-century colonial house (from ₹6,500, see neemranahotels.com).

Muthupet Lagoon
On the southernmost reaches of Tamil Nadu’s Cauvery river delta—where the large and historically-relevant Kaveri river flows—lies the quaint town of Muthupet. While the town itself does not offer a whole lot, its surrounding mangroves and lagoon make for quite the weekend getaway. Approx. 360 km south of Chennai, the groves here are formed by the meeting of multiple tributary rivers which also happen to sandwich the town. Of the thousands of hectares of mangroves, a portion is the Muthupet Lagoon, which is 8 km from Muthupet town and only accessible by boat. The lagoon is said to be beautiful, with clean saline water and ample vegetation. Recreational boat services are available here for visitors; they can even stop at small islands during their ride. Plenty of birds and marine life too are observable among the lush surroundings. Stay option: Hotel Star Residency (approx ₹1,200 on bookings.com).

Chidambaram, Tamil Nadu
No ‘weekend getaways from Chennai’ list is complete without a temple town. South India boasts of many, but there’s something about Chidambaram that makes it stand out from the others. It may only be as holy as the others, but architecturally speaking, it is a unique marvel. Nataraja Temple’s complex is about 40 acres in size and filled with shrines of many deities, numerous temple gopurams and prakarams and other splendid relics of a glorious kingdom past (mostly as an important part of the Chola kingdom). 226 km south of Chennai via ECR, upon arrival, immediately go and visit the Temple, which is primarily a colossal structure with four towers (the tallest being 135ft), many idols, painted walls and countless tiles. It also has many prakarams and smaller temples within its structure as well. Outside the complex, the Thillai Kali Amman Temple, a temple to goddess Kali, is a popular visit. Stay options: Hotel Saradharam, a 3-star option (from ₹990; see hotelsaradharam.co.in) and Akshaya Hotel (from ₹2,400; see hotel-akshaya.com).

From tea estates to rugged peaks, the Niligiris are perfect for hikes

Trekking The Nilgiris
Or are you are one of those looking to escape from the madding crowd, by seeking solace in the company of nature? Perhaps trek the blue jewel of the Western Ghats—the Nilgiris hill range. There are a few great options: the three- to four-day Ooty to Mukurthi Lake trek being one. Ooty hill-station is about 12hrs from Chennai. On day one, you trek to Porthimund, which takes about 6-8hrs and is reached via Parsons Peak and Parson’s Valley. Day two and three are relatively shorter walks, and allow one to explore the scenic Mukurthi Lake and nearby areas. For day trekkers, there’s the Conoor-The Droog trek. It takes about 10hrs to reach Conoor, which is known for its Nilgiri tea, from where you begin a trek to The Droog, a 16th century fort that legends say was used by Tipu Sultan. For those looking to rejuvenate, there are hot springs abound here. 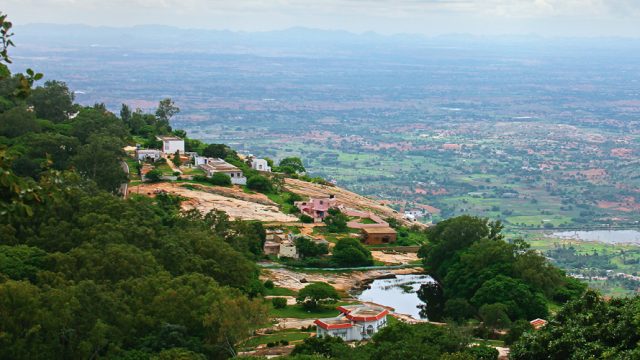