Odisha, better known for its sea beaches and temple architecture, is also home to some of the

best wildlife reserves in the country. With nearly one-third of the state under forest cover, and 18 sanctuaries, including two national parks, you have a wide choice of places to visit. So here are five of the best to acquaint yourself with the diverse fauna of the state.

Chilika
One of the most popular tourist destinations of Odisha, the Chilika Lake (actually a lagoon) is home to a large number of resident birds. In winter, the placid lake plays host to migratory birds, including flamingos. The Nalban island sanctuary inside the lake is popular with birdwatchers. The lake is also home to Irrawady dolphins. The fish, crab and prawns found in the lake are harvested by the local fishermen. The popular entry points are – north to south – Mangalajodi, Satpada, Barkul and Rambha. Private accommodation is available in Mangalajodi while Odisha Tourism Development Corporation (OTDC) runs tourist lodges in the other three places. Satpada can be visited on a half day trip from the beach town, Puri (50km by road). Boats can be arranged through the lodges.

Bhitarkanika, a sanctuary and national park, largely consists of a mangrove ecosystem, and therefore best explored on a boat ride through the meandering waterways. The forest is mainly known for its crocodiles, which can be seen basking in the mudflats or swimming in the creeks. Other animals that one is likely to come across are spotted deer, sambar, wild pigs, snakes and a variety of birds. One has to enter through Chandbali (190 km by road from Bhubaneswar, the nearest airport), Rajnagar (130 km from Bhubaneswar) and Gupti (25 km from Rajnagar). Accommodation is available at forest rest houses in Dangmal Island (connected by boat with Chandbali, Rajnagar and Gupti). Gahirmatha, part of Bhitarkanika, is where Olive Ridley Sea Turtles  arrive twice every year between January and March to lay eggs.

Simlipal is also known for its beautiful waterfalls

With high peaks, thick forests, rivers, meadows and grassland, and several waterfalls to its credit, Simlipal is one of the most picturesque tiger reserves of India. Two of the most popular destinations inside the park are Barehipani and Joranda, owing to the cascades that descend through the verdant hills. A biosphere reserve, Simlipal is home to tigers, elephants, leopards, deer, etc. Regular visitors to the forest mention the salt lick at Chahala as a good place to look for the wild denizens. Forest rest houses in various corners of the tiger reserve offer limited accommodation. OTDC has a tourist lodge at Lulung.  Baripada town is the most convenient entry point. The nearest airport is Bhubaneswar, about 270 km by road from Baripada, which is also the nearest rail head. Simlipal remains open from November 1 to June 15.  A word of caution: Simlipal is a malaria-prone zone. So preventive measures are a must.

Satkosia
At Satkosia, the Mahanadi River, the lifeline of Odisha, cuts a 22-km long deep gorge through the hills. The forest along the gorge has been declared a sanctuary. According to records, 38 species of mammals, 128 species of birds, 27 species of reptiles, 4 species of amphibians and 183 species of fish have been recorded in the sanctuary. One may go boating in the gorge. There is a forest rest house at Tikarpada, at the mouth of the gorge. In winter, the forest department sometimes runs an eco-camp. Budget hotels are available at Angul, the nearest town and rail head, about 60km from Tikarpada. Bhubaneswar, the nearest airport is about 210km away. A word of caution: Preventive measures against malaria is must.

Home to large groups of elephants, Chandaka Widlife Sanctuary is about 20km by road from Bhubaneswar, the state capital. The nearly 193 sq.km large sanctuary is all that what remains of the rolling woods that once covered the region. Apart from elephants, Chandaka is also home to leopards, deer, wild boar, Indian mongoose and many species of birds. A visit to the Kochilaberana, Pitagadia or Charichhak watch towers may be a rewarding experience.  The popular Nandankanan Zoo (with its tiger and lion safaris) and Botanical Garden has been carved out along the Kanjia Lake, once part of the Chandaka forest. 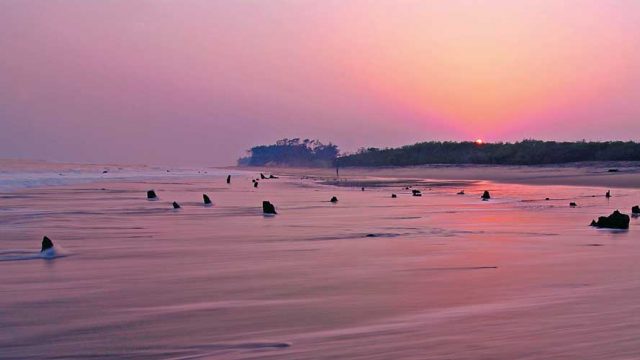 The park is home to saltwater crocodiles and mangroves