There is no better way to gauge the beauty of a hill than to climb it. We

told you of five easy treks you can attempt to go yesterday which you can read here. Today, we bring you five more simple treks you can choose from. Surreal lakes, snow-covered peaks, verdant meadows—these treks around Himachal Pradesh and Uttarakhand have everything you could ask for and more:

The Beas River snakes its way through the Upper Kullu Valley, as seen from a grassy patch behind the Bijli Mahadev temple.

ROUTE Jagatsukh to Buggi to Tilgan to Jogi Dug to Kharimindiyari to Chikka to Pandu Ropa
DURATION Six days
Do not confuse this trek with the popular Hampta Pass one. Not only does the Circuit trek ditch the trail to the challenging Hampta Pass, it follows a shorter route and has a much gentler gradient (you gain approximately 4,000 feet overall). Yet the shift in terrain is spectacular—from orchards, meadows and forests to snowfields. The views comprise the panoramic Dhauladhar and Pir Panjal ranges.At the Kharimindiyari campsite, you can spot the breathtaking Bara Bhangal range. Flower-embellished valleys (such as at Chikka) dominate the latter part of the trek. The best time to do this trek is late May.

USP Easy access from Delhi and majestic views of the striking Bandarpunch range
ROUTE Pantwari to Khatian to Nag Tibba to Pantwari
DURATION Three days
From Delhi, you can drive to Pantwari, trek eight kilometres to Nag Tibba, descend and go back—all without missing a single day of work. You can even bring your kids as this is an easy trek. The initial ascent is through rocky terrain, but soon you are surrounded by oak and rhododendron forests. As you gain altitude, powder snow greets you in the winter; in the summer, it is yellowing hillsides with deep green groves. Eventually, you arrive at the Nag Tibba base, where the nag devta (serpent god) temple is popular among locals. In fact, the peak itself is considered its home. Brace yourself for the last kilometre—it is steep but rewarding. From the summit, called Jhandi, peaks of the Bandarpunch range, such as Srikanta and Kalanag, are visible.

A campsite on the Dodital trek route

USP An ethereal lake with linkages to Ganesha
ROUTE Sangam Chatti to Bebra to Manjhi to Dodital to Manjhi to Bebra to Sangam Chatti
DURATION Up to six days
Legends say that Dodital is the abode of the Hindu god Ganesha. Whether that is true or not, one glance at the emerald blue lake and you understand why it could inspire divine connotations. The trek becomes difficult if you go till Darwa Top beyond the lake, so that is best avoided. People usually go directly to Dodital from Bebra, and then, during the descent, trek straight down to Sangam Chatti. However, feel free to do it at your own pace. Do stop at Manjhi, where you will find a pretty campsite with a number of Gujjar shepherd huts. At Dodital, which is surrounded by snow peaks in winter, you can spot the freshwater golden mahseer, one of the most charismatic Himalayan trouts.

USP A winter trek par excellence
ROUTE Lohajung to Bekaltal to Brahmatal to Lohajung
DURATION Three days
Those fond of winters will inevitably enjoy this trek. It is only a comfort trek till the frozen glacial lake, Brahmatal, though, and advanced trekkers can go further on to Tilbudi. This trek is unique: it is a peak winter trek, which means you can go for it even in January. The heavy snow could pose a challenge, so remember to be well-equipped. Most of the trail is in snow-covered surroundings, including forests. A highlight includes views of peaks such as Nanda Ghunti and Trisul. Lakeside camping at Bekaltal is an exciting experience.

Sunrise at Deoriatal (the Chaukhamba peak is to the right)

USP Perfect for birding, views of many high-altitude peaks and springtime trekking
ROUTE Sari to Deoriatal to Chopta to Chandrashila to Chopta
DURATION Three days
They say Garhwal’s most magnificent peaks are visible on this trail. Everything about it is appealing—the flora, Deoriatal (a startlingly attractive lake), the Tungnath temple (the highest Shiva shrine in the world at approximately 12,000 feet) and the Chandrashila peak (with a gorgeous trail to the summit), which offers views of many 22,000-ft-plus peaks and dozens of rare and interesting varieties of birds. The trek is more or less comfortable till Chopta, but Chandrashila (via Tungnath) is a bit steep and certainly requires some skill. Nevertheless, we recommended you give it a try. 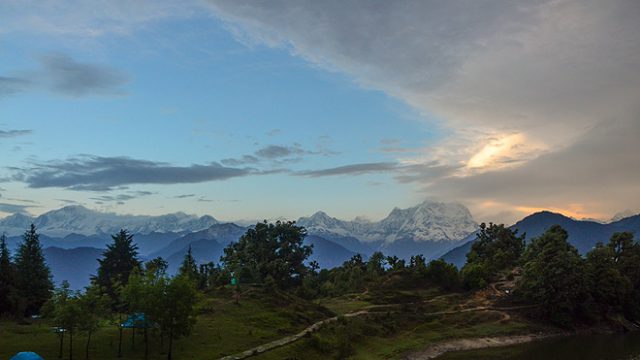 Uttarakhand: Struggling Through to Paradise

A trek to Chopta and Tunganath in the monsoon can be daunting, give or take a lightning strike 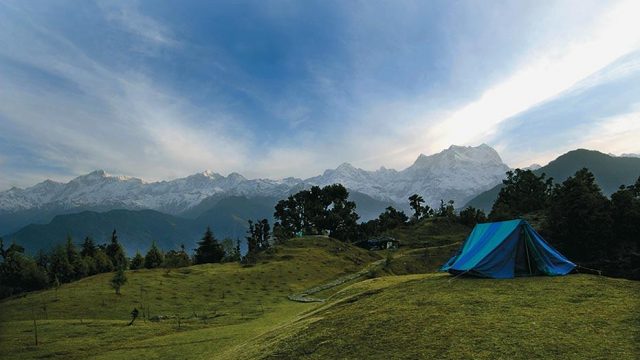 Combine trekking and birding on the Chopta trail, Uttarakhand