Assam Flood: The toll due to floods and landslides this year increased to 159 with eight more people dying in six districts – Nagaon, Lakhimpur, Barpeta, Biswanath, Dhemaji and Morigaon, the officials said.

Odisha CM Asks Officials To Be Ready For All Possible Disasters

Natural disasters like floods, cyclones, and droughts occur in the June-October period every year, and therefore the state administration must strengthen its preparedness to handle such calamities, the Chief Minister said.

A missing Israeli trekker has been reported in Himachal Pradesh. Manoj Sinha expressed satisfaction over the arrangements put in place by the Shri Amarnathji Shrine Board (SASB) and other departments for a smooth and peaceful conduct of the yatra from June 30.

The sensors have been installed at 10 specific locations where flooding occurs frequently, he said. He claimed that this new system has, perhaps, been installed for the first time in any civic limits to prevent a disaster... The Grand Challenge is open to all and anyone from startups and innovators to even students are eligible to participate. Assam Floods: No New Deaths, Affected People Down To 68,000

Altogether 705 people are taking shelter in four relief camps and three relief distribution centres are operational in the flood-hit areas.

The Ya'an city, where the earthquake struck, has activated the second-highest level of emergency response and is assessing damage.

Drone Festival | Use Of Drones Will Rise In Agriculture, Sports And Defence Sector: PM Modi

The prime minister is scheduled to interact with kisan drone pilots, witness open-air drone demonstrations and interact with startups in the drone exhibition...

The blaze erupted in the company premises at 2.35 am.

A massive storm accompanied by heavy rain and hail damaged over 200 houses, including a church building in Mizoram's Kolasib and Mamit districts.

According to Assam State Disaster Management Authority's (ASDMA) bulletin, at least 7,378 houses and other establishments have been damaged in the state during...

According to the state disaster management authority, two people, identified as Rohit Kshiar and Dilibon Tangsang, were killed while two houses and two shops...

The IMD advised fishermen to not venture into the Bay of Bengal and the Andaman Sea during this period.

The Delhi government had recommended reopening of schools in the national capital, but a decision on this was postponed till the next meeting by the Delhi... 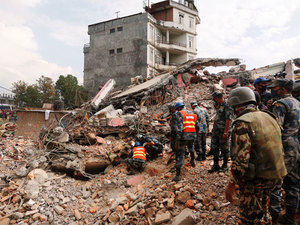 According to District Disaster Management Officer Bhupendra Mahar, no damage has been reported so far as the intensity of the earthquake was mild.