Myanmar’s Refugees In Mizoram: As India Looks The Other Way, Thousands On Edge

A year since the Mayanmar military coup, about 20,000 Chin refugees have crossed over into the border districts of Mizoram. The refugee crisis created by the junta is likely to be one of the biggest stories of 2022.

More from Rupa Chinai
View All

On this day last year, a coup by Army generals saw the overthrow of a democratically elected government in Myanmar. The spirit of democracy, however, lives on. The past year has seen a nationwide movement of determined, peaceful resistance by a younger generation that had tasted freedom and will not now settle for anything less. The Tatmadaw, the military arm of the ruling junta led by General Min Aung Hlaing, unleashed a brutal reign of terror on the civilian population but its genocide has escalated alarmingly in recent months. Refugees, particularly from the Chin State bordering India, are pouring into Mizoram and Manipur but there are no clear official estimates of their numbers. The government of India’s refusal to acknowledge the problem or speak up against the Myanmar junta is putting more lives in harm’s way. Indian media houses have also failed to tell the world about this reality.

The Mizo community, which considers the Chin to be their close brethren, have taken on more than their share of responsibility. They have not forgotten the years of the Mizo struggle during the 1960s and ’70s, when it was the Chin across the border that provided them refuge from the bombing of the Indian Air Force and reprisals of the Indian security forces. There is a history of intermarriage and family kinship on both sides of the border and also the ability to understand the Mizo language. However, given their own meagre infrastructure and resources, the Mizo are today stretched beyond capacity in the absence of government help. Until January 2022, there were an estimated 20,000 Chin refugees reported to be in refugee camps spread across southern districts of Mizoram, along the Myanmar border. 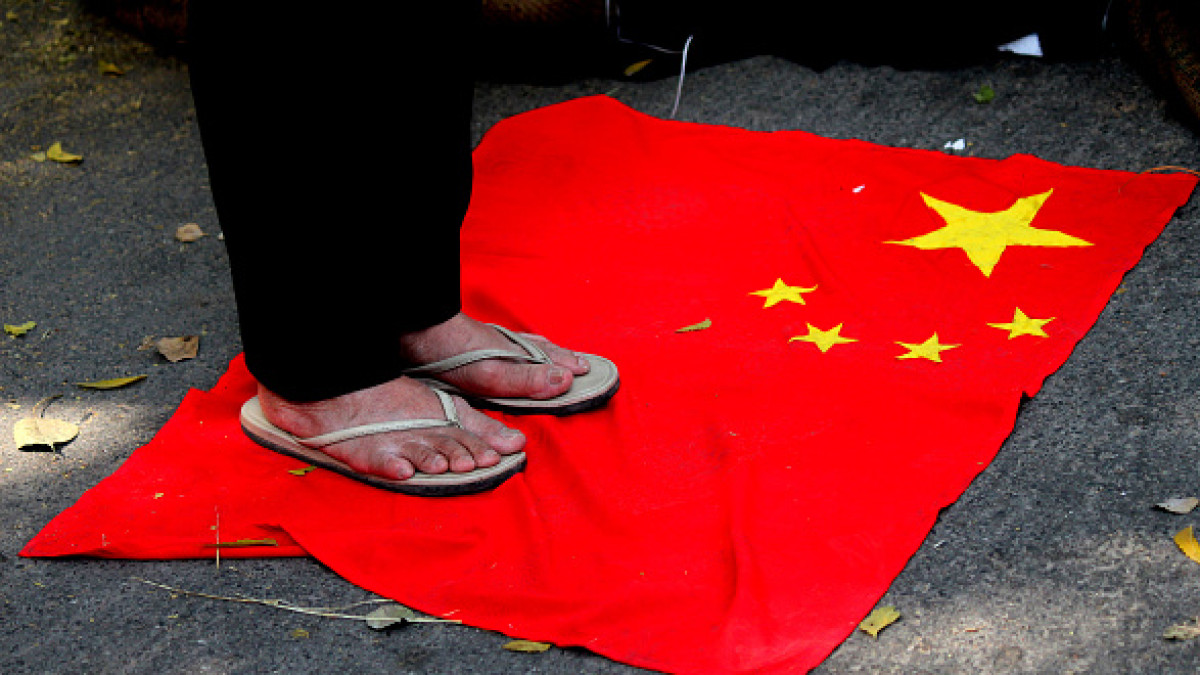 A protester stands on a Chinese flag | Image credit: Getty

The refugees have walked for up to a week over some of the most rugged mountains and jungle terrains in the world. Fording deep, fast flowing rivers, most with just the clothes they are wearing, the refugees, including old people and small children, lived off bamboo shoot and fish and were supported by the meagre hospitality of poverty-stricken villagers along the way. They crossed into Mizoram which has a 510 km border with the Chin State, bringing stories of entire villages being emptied and burnt down, civilians being used as human shields, shelling of residential areas, looting, torture, rape and violence. Many bore shrapnel wounds and died on the way or in the hospital at Aizawl, which offers the only tertiary care facility in the state.

The few reports filtering out of Mizoram reveal that the Chin refugees are living in rural makeshift refugee camps where up to a 100 people sleep in one room. They do not have adequate warmth, shelter, food, water and other survival necessities, including basic healthcare, that too while Covid rages across Mizoram. The entire task of hosting refugees is being handled by village communities organised by powerful institutions like the Young Mizo Association and the Mizo Baptist Church that have also been organising fundraisers and distributing relief. Schools have enrolled the Chin children. Though feeling welcome and secure in Mizoram, the Chin long to go back to their jhum fields, but there is little hope of return. Many are reported to be suffering from Post-Traumatic Stress Disorder, where hope and joy of living are at an ebb.

The state government, led by the Mizo National Front (an alliance partner of the BJP-cobbled National Democratic Alliance), has defied the diktat of the Ministry of Home Affairs, forbidding states from offering refuge and relief.  To this Chief Minister Zoramthanga responded on 18th March, 2021, “Every day, terrified Myanmar citizens are struggling to cross over to Mizoram in search of shelter and protection. Mizoram cannot just remain indifferent to their suffering today.” Though the MNF’s hands are tied because of this unholy alliance, the administration here has been quietly supportive, unlike in Manipur where another NDA-partnered state government went about arresting hapless refugees and deporting them back towards certain death.  Many of the refugees include prominent journalists, politicians, police officials and civilian leaders that are being hounded by the Tatmadaw.

A Year Since Democracy Died In Myanmar

The Narendra Modi government, meanwhile, has failed to speak up and tell Myanmar’s rulers that they must immediately stop this genocide and restore democratic rule. Being directly affected by the massive refugee influx into Northeast India, which will undoubtedly escalate in the coming months, India has compelling reasons to marshal world opinion in the interests of its own national security and stability before it gets out of control. The Prime Minister has instead gone out of his way to compete with China in reassuring Myanmar’s rogue rulers that they are the only friends they have got.

According to longtime Myanmar watcher Bertil Lintner (Asia Times, January 27th, 2022), India has, since 2013, been delivering artillery guns, radars and nighttime devices to the Tatmadaw and in recent years has been focusing on naval cooperation with it to counter China’s rising influence in the Indian Ocean. In March 2020, India even gave them a two diesel-electric 3,000-ton Soviet-era Kilo-class submarine, matching a similar Chinese offer of a 2100 ton Type 035 Ming class submarine. Since 1989, the Tatmadaw has spent more than a billion dollars in procuring new, sophisticated military weapons, mainly from China, but also from Singapore, Pakistan and Israel, Lintner reported.

A statement issued on 28th January 2022 by the office of the United Nations Human Rights  Commissioner states that it has documented gross human rights violations taking place in Myanmar on a daily basis, that is primarily perpetrated by the security forces. At least 11,787 people have been arbitrarily detained for voicing their opposition to the military either in peaceful protests or through their online activities, of whom 8792 remain in custody. At least 290 have died in detention, many likely due to the use of torture. The brutal effort of the security forces to crush dissent has led to the killing of 1,500 people since the 1st February 2021 coup. This figure does not include the additional deaths of thousands in armed conflict and violence which have intensified nationwide, the UN body said. 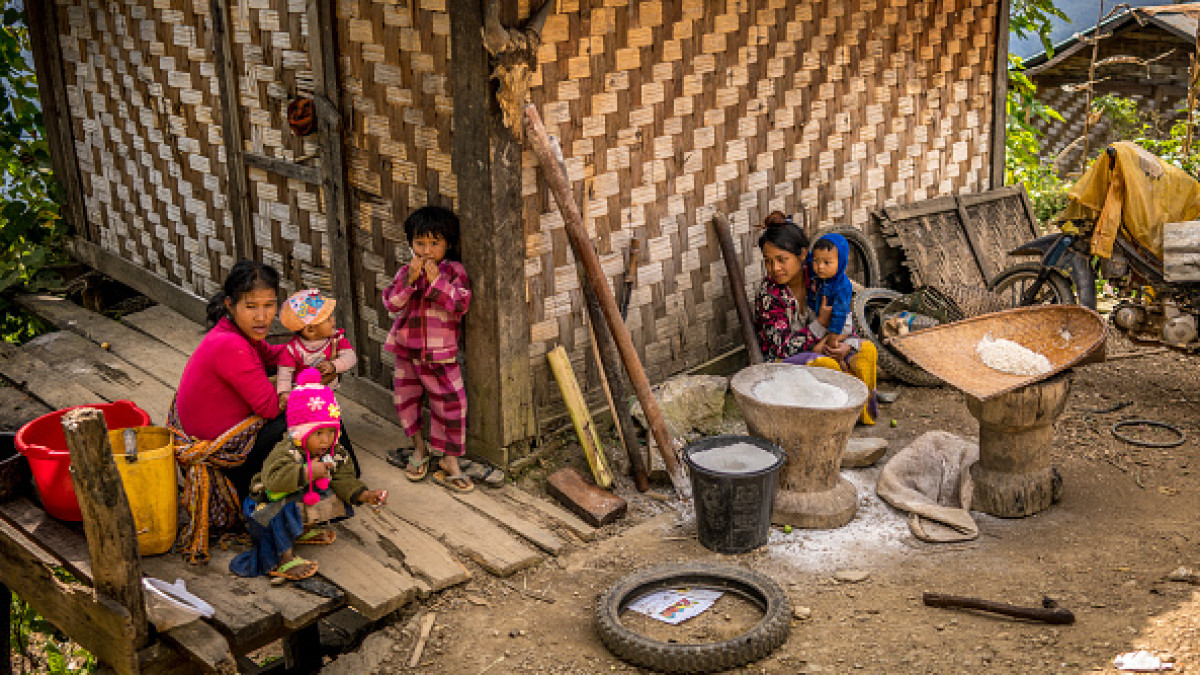 The statement further says that while armed clashes have grown in frequency and intensity across Myanmar, areas of highest intensity military activity are the Sagaing region, Chin, Kachin, Kayah and Kayin states where the military has been punishing local communities for their assumed support of armed elements. The UN body has documented village burnings, including places of worship and medical clinics, mass arrests, summary executions and the use of torture. Estimating that nearly half of Myanmar’s population of 54 million will be driven into poverty this year, the UN Office attributes this to the combined impact of Covid, the collapse of the banking, transportation, education and other sectors, that is leaving Myanmar’s economy on the brink of collapse.

In this scenario, what is India’s ruling class thinking? In its mortal fear of China and engaging in oneupmanship over its spheres of influence, are we forgetting a basic premise of history? India and Myanmar’s security lies in the well-being and happiness of its border populations and its minorities. The history of instability on both sides of the international border, ongoing since India and Burma attained Independence, has led to some of the longest-running insurgency movements in the world. While India has attained some measure of stability on this issue, these gains could fast unravel given the policies perpetuated by the Modi government. Myanmar’s rulers, meanwhile, have repeatedly missed the bus in their steadfast refusal to consider the demand of ethnic minorities for autonomy and self-determination.

Representatives of Chin and other ethnic minorities of Myanmar living abroad are highlighting “a global humanitarian issue”, while calling for aid to refugees in Northeast India. In Mizoram, they identify nine main camps located at Zawng Ling, Lawng Tlai, Lunglei, Nei Aw Tla, Lung Hli Tum, Aizawl, Hna Thial, Chapi and Phai Rawng. However, access to these camps is a challenge even for Indian citizens, who require a restricted area permit to enter these Northeast border states. Language, too, is a barrier. With the Indian government recklessly ignoring the developing crisis and the national media houses failing to create awareness with spot coverage, a young Mizo journalist, Kimi Colney, based in Aizawl, shows us a possible way forward.

During a visit to one of the refugee camps in Lunglei district, Kimi found that they had food barely enough to last a few days. That night she put out an Instagram appeal seeking donations to buy rice and dal, but then feeling hesitant she thought of deleting the post as soon as she finished her dinner. To her surprise, however, she found that in that brief space of time her message had gone far beyond the NE region.

In her Instagram update, Kimi writes, “Donations came pouring from people whose names I was seeing for the first time, from Mizoram too, but so many donations from the rest of India, from Punjab, Karnataka, Maharashtra, from everywhere. It reminded me how much this fight for our fellow humans survival is not Mizoram’s fight, it is not Manipur’s fight, it is India’s fight. India’s heart beats for humanity, for injustices to humanity. Today, I hope most of all the refugees felt the love from the 139 people that donated Rs 1,74,902 so they could have one more meal. I know they thank you in their prayers as they sleep tonight. And if you doubt that your hundred or two might be too less, please swipe to the last image of young hands clutching two packets of Rs 5 biscuits and know, that you were an answer to his prayer today.”

In this current impasse, Indian citizens and the diaspora overseas supporting such efforts to work with local organisations may prove to be most effective. Meanwhile, the Chin Human Rights Organisation based in Aizawl needs national media and citizen support in advocating their cause to both the state and central governments. The refugee crisis created by Myanmar’s rogue rulers looms large and is likely to one of the biggest stories of 2022. The Indian media should wake up to a huge international story taking place under its very nose.

(Rupa Chinai is an independent journalist based in Mumbai. She is the author of the book ‘Understanding India’s Northeast — A Reporter’s Journal’ . Views expressed in this article are personal and may not necessarily reflect the views of Outlook Magazine)