China Trying To Take Over Afghan Air Base, Use Pak Against India: Nikki Haley

America’s former envoy to the United Nations Nikki Haley said President Joe Biden has lost the trust and confidence of American allies after his hasty decision to withdraw troops from Afghanistan. 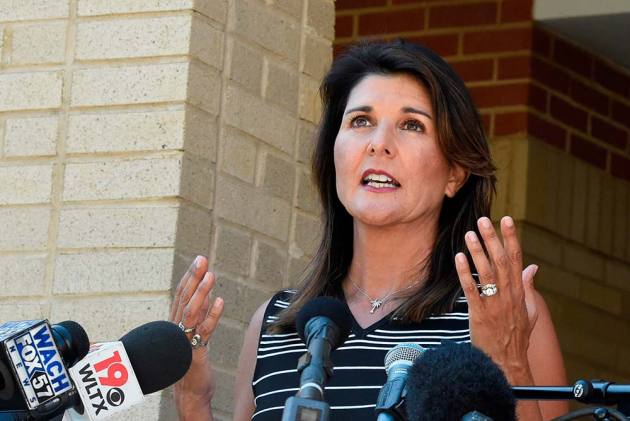 The US needs to closely watch China as it might try to take over the Bagram air force base in Afghanistan following the Taliban's takeover of the war-torn country and use Pakistan to get stronger to go against India, a former senior American diplomat has warned.

America’s former envoy to the United Nations Nikki Haley said President Joe Biden has lost the trust and confidence of American allies after his hasty decision to withdraw troops from Afghanistan. She said there are many challenges in front of the US.

The US needs to make sure that Americans are protected and the country's cybersecurity is strong "because actors like Russia are going to continue to hack us because we show no signs of willingness to fight back, she said.

"We need to watch China because I think you are going to see China make a move for Bagram Air Force Base. I think they are also making a move in Afghanistan and trying to use Pakistan to get stronger to go against India. So, we have got a lot of issues," she said.

In July, the US military left Bagram Airfield - its key base in Afghanistan - after nearly 20 years. At its height, Bagram base was home to tens of thousands of US troops.

"The biggest thing he (Biden) should do is strengthen our allies, strengthen those relationships, modernise our military, and make sure we are prepared for the cyber-crimes and the terrorist crimes that are headed our way,” she said in response to a question.

She said it is time that President Biden's administration reaches out to its key friends and allies like India, Japan and Australia and assure them that the US will have their back.

“The first thing you should do is immediately start connecting with our allies, whether it's Taiwan, whether it's Ukraine, whether it's Israel, whether it's India, Australia, Japan, all of them, and reassure them that we will have their back and that we need them as well,” Haley said.

Haley slammed Biden for his disastrous withdrawal of US forces from Afghanistan.

“By the end of that speech that President Biden gave, it was the beginning of the lame-duck presidency for Joe Biden,” she said.

Biden, she alleged, has lost the trust and confidence of the American people. “If you look at the fact that the jihadists are celebrating in the streets because America has run out of town – and they left them with billions of dollars' worth of equipment and ammunition as a housewarming present,” she said.

“You couldn't ask for a more embarrassing, humiliating situation than what we have right now. The world is more definitely a dangerous place. Just because we are out of Afghanistan does not mean this war is over,” Haley said.