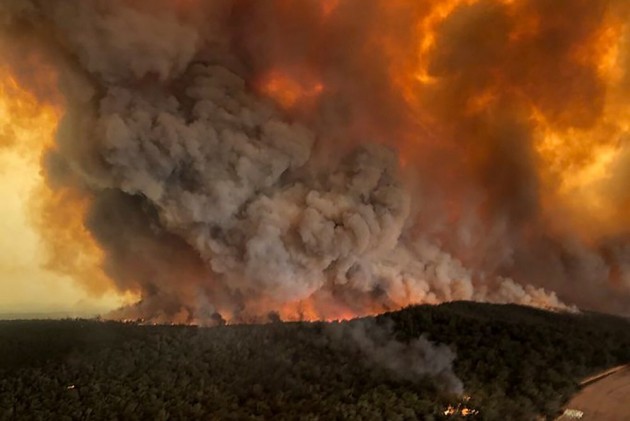 Australian authorities on Thursday declared a state of emergency and forced evacuation of residents, tourists and closure of roads in the bushfire zones in the states of New South Wales and Victoria ahead of Saturday's forecast of "horrible" fire conditions due to the intensified heat wave.

New South Wales government on Thursday declared state of emergency for a week starting Friday which would mean forced evacuations and road closures for people in bushfire zones ahead of Saturday's forecast "horrible" fire conditions.

Authorities have urged people to leave the impacted areas if they can as the Rural Fire Service department is expecting tough conditions over the weekend.

As of Thursday, NSW was struggling with 113 fires burning across the state with over four million hectares burnt.

"I want to thank in particular police, fire rescue personnel who have made sure that where people can have access to main roads, that they can let them through even monitoring them closely, with only letting a few cars through at a time," he said.

"We know temperatures will be in the mid-40s in parts of the state. We also know that there are a lot of tourists on the move and allowing us to declare the state of emergency from tomorrow morning will allow us to ensure that we can provide safe access to roads when we need to," he said.

''We encourage people to exercise caution. We do appreciate that for some, it is difficult to access supplies but it's much easier than what it was yesterday and the day before," he said.

As the catastrophic blaze intensified, Prime Minister Scott Morrison on Thursday said Australia's existing emissions reduction policies will do enough to protect the environment and seek to reduce bushfire risks.

Morrison said the National Security Committee of the Cabinet would meet on Monday to consider bringing in more Defence Force ships and helicopters "as well as the longer-term response and some issues we have identified to consider amongst premiers after the fires".

"Our emissions reductions policies will both protect our environment and seek to reduce the risk and hazard we are seeing today. At the same time, it will seek to make sure the viability of people's jobs and livelihoods," he said during a press conference.

In the state of Victoria, authorities on Thursday urged people in the East Gippsland region to leave the bushfire zones, especially in the state's north-east and large areas of the High Country, with conditions expected to worsen on the coming weekend.

One man was confirmed dead and there are ''grave concerns" regarding 17 people who are still missing in Victoria while in NSW, seven people were confirmed dead.

Victoria's Deputy Emergency Commissioner Deb Abbott said people living in alpine areas of the state as well as East Gippsland and the Upper Murray region had a 24-hour window of opportunity to leave, or risk being cut off by smoke and flames.

"We want them to leave now," she said.

"We don't want those people to become isolated like some of the communities down at East Gippsland, so again I ask; leave now,” she said.

"Leave zones” are also in place for the NSW south coast, from Nowra in the north to the Victorian border.

''Fire dangers on Saturday will reach severe to extreme, yet again, across fire sites and communities that have already seen wide-scale devastation," Bureau of Meteorology's Jonathan How said.