It should. For he represented the place that was once a vibrant society, the home for people of all faiths and cultural inclinations. Not the stifled, torn, violent state it has become today 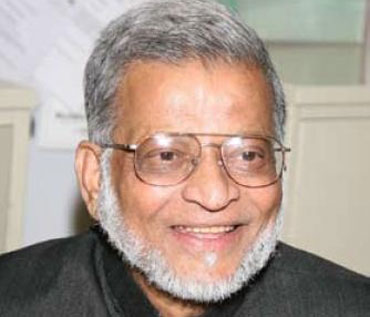 The news of Adil Mansuri’s passing (November 6, 2008) filled me with a sadness that ran deeper than just a loss of a good poet, artist and a family friend. That very afternoon, not knowing that he had transitioned into a more peaceful realm, a student in my Modern Urdu Literature Class had done her presentation on Adil Mansuri. In what afterwards seemed an almost surrealistic fashion, the class had appreciated his calligraphic designs heightened through the overhead projector on a wide screen and read some of his poetry in the original and in translation.. I learnt of his death later that day, but the feeling of remembrance lingered on to an extent that I was forced to analyze my emotions regarding the loss and felt compelled to write about. it.

I eventually realized that it was tied to Adil sahib’s being from Gujarat, a place that was once a vibrant society, the home for people of all faiths and cultural inclinations; not the stifled, torn, violent place it has become today. Gujarat through the port city of Surat was the hub of trade in the Indian Ocean and the gateway to a land of tolerance and prosperity. Vali Gujarati, (also known as Vali Dakhani, d. 1708) the first great classical Urdu poet wrote a masnavi (long narrative poem) on Surat’s delightful ambience and cultural diversity in those times. Vali is effusive in his praise for the city. His description of its demography includes beautiful men and women, Hindus, Muslims, Parsis even Europeans. Here are some random excerpts from Vali’s forty four sher masnavi.

The language we know today by the name of Urdu, flowered into a literary language not in Delhi at first but in faraway Gujarat. Gujarat is the home of the earliest Hindi/Gujri/Urdu poets. The earliest poetry was mystico-philosophical. Sheikh Bahauddin Bajan (1388-1506) was the first substantial poet in the language that he called "Hindi and Gujri". He was a Gujarati sufi and lover of music, hence the name "Bajan". In each of his short Hindi poems he has specified the particular raga in which the poem is to be sung:. Gujarat has given us a stream of distinguished literati in the many languages that reflect its integrative culture. It gave us Gandhi who wrote a new grammar of Indian politics, leading a nationwide movement against not just colonialism but tyranny, inequality, especially of the social kind, and non-violence. Godhra, the village from where Gandhi launched his campaign in 1917 against these injustices ironically became the site of the manic sectarian violence of 2002, showing us how different Gujarat is now from its past history. In the climate of terror that was unleashed, Vali’s grave in Ahmedabad was desecrated and vandalized. A sad testimony to how far we have strayed from the Surat where the river Tapti used to flow and the poet prayed for the safety of the hundreds of Hindu pilgrims on bathing days.

Adil Mansuri (1936-2008) was among the dozen or so poets who emerged in the 1960s as the ‘new names’ in Urdu poetry. Born as Farid Muhammad in Ahmedabad, Gujarat, he adopted Adil Mansuri as his pen name. Mansuri has been called the most courageous amongst the poets of the modernist movement because his poems exhibit ‘a fighting spirit’ or boldness. He had the resolve to confront challenges with resilience and an infinite staying power. His was the distinction of being Urdu’s only surrealistic poet.. As a surrealist he mapped image upon image and then embedded them within the larger canvas creating a meaning from what may seem illogical and disconnected. His canvas was wide; he engaged with religion, politics, transnational existence, city life and much more, drawing metaphors from Islamic history to present politics. An observer of urban life, Mansuri has written poems not just on cities but on specific locales in those cities such as streets, hotels, neighborhoods.

After moving to New Jersey, Mansuri’s writing became more bilingual. More recently, Mansuri had begun editing and producing an electronic journal in Gujarati, Ghazal Gurjari. He also began writing plays and developing his hobby of calligraphy into a more serious engagement with the art form. He has designed covers/ dust jackets for many of his friends' publications. He drew tughras using computer graphics to generate artistic fonts and geometrics, reviving this dying art form.

In the poem written on his father’s death he avoids sentimentality. He does not allow himself to be submerged in pain but uses it to contemplate on the meaning on human existence.

On the Death of My Father

He had not slept for forty nights.
Loading dreams on camels
he kept going; moving along into the wastelands
of the night
he kept burning on the pyres of moonlight.

On the table
dentures resting in a glass kept smiling.

From a realm behind the dark glasses,
the cataract floret strove to raise its
head.

Darkness began smiling in his eye.

The soul’s hand was riddled by the tip
of a needle.

The lamps of desires were stilled in his
body.

Fluid shadows of green water, moment
by moment,
began descending into his body.

Under the shade of ten stars embedded
in the roof of the house,
images relinquished contours;
images withered.

In veins devoid of blood
under the blanket of flesh
On ladders fashioned from bones
On pathways of breath
I await you.

Mansuri wrote four deeply unsettling poems on the horrific genocide in Bosnia which illustrate the surrealistic mode of his style. Written in response to Bosnia, the poems may very well speak to the equally ghastly events in his own city of Ahmedabad in 2002.

In the emptiness
Hands raised in prayer
Chopped from the shoulders
Heads bowed to the ground
Severed from the neck
Beyond, through pierced chests
A city, burning
Smoke billowing through the holes
Spreading into every eye
Every dream.

I would like to close this tribute with one of his poems that brings a message of hope: His Poetry Collection is titled Hashr ki Subah Darakhshan Ho (May the Morning of Resurrection be Luminous). I fervently hope it will be so.

The journey of black sun is over.
Now, dreams shall descend to the earth
from the eye of the heavens.
Now, windows of space shall be
opened;
the earth shall be cleansed with moon rays.