Courtney Walsh's sustained success is a testament to his amazing levels of fitness, skill and determination. 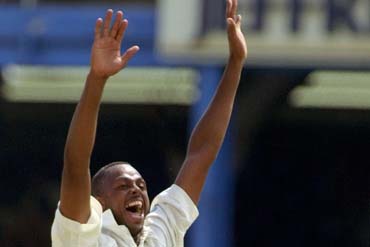 Aristotle's adage "master yourself and master the world" might have been written for 38-year-old Courtney Walsh. Long ago he took control of himself and today, in statistical terms at least, is lord of all he surveys. Although the likes of Shane Warne and Muthiah Muralitharan may eclipse the Jamaican’s landmark of 500 Test wickets in future, Walsh will always stand out, apart from his longevity as a seamer, for what he was – a gentleman and a fast bowler.

From the time of Harold Larwood, of Bodyline infame, a fast bowler has had the ball in his hands and a curse on his lips. Glenn McGrath and Allan Donald are modern day exponents of the art of "supreme antagonism". What of speedsters, legspinner Bill O’Reilly was once asked by a radio commentator what he hated most. "Batsmen" the former Aussie great snarled.

But Walsh was cast in a different mould. "Right from the time I started out to be a pace bowler, I believed that like all forms of bowling, this one too was an art. You need strength to be a fast bowler, but that strength must come from within. Cursing batsmen and getting angry every now and then can only destroy your own concentration. However great a batsman, you have to be better than him to get him out and that needs a lot of concentration," was his reply to a query on how he could he be so good in his trade without the hostility.

Tales of his gentlemanly ways – like the one when he refused to run out last man Salim Jaffer in the 1987 World Cup match against Pakistan and in the process costing the Caribbeans a semi-final berth -- could fill up pages. But it was not only on the field, but also off it, that Walsh was well mannered. During a three-day match at a small centre which did not have a regular cricket ground, Walsh as skipper calmed his teammates saying "Man, let us think of the crowd which has gathered here to see us since early morning. We are here to play for them."

Such is the respect Walsh commands that the Australians, renowned for playing their cricket tough, gave an impromptu guard of honour to show their respect when the West Indian came out to bat for the last time in Australia (at the Sydney Cricket Ground) in January this year. Said offspinner Colin "Funky" Miller "We hadn't planned it. It was Steve's (Waugh) idea and I think it was a nice little touch for a player who's played 16 or 17 years of Test cricket -- I think he deserved something like that."

Walsh’s Test career commenced at Perth in November 1984 against Australia when as a gangly 22-year-old, he was called up as support bowler – someone to bowl into the wind and give the trio of Malcolm Marshall, Joel Garner and Michael Holding a breather. Sixteen years, 129 Tests and 28833 deliveries later Walsh has broken into statistical territory that for generations was thought to be out of reach. On the flip side, Walsh finds himself in the record books for his exploits with the bat or rather lack of it. After 129 Tests he has maximum – 41—number of ducks against his name. Nevertheless, it has been a long hard journey to the top which might not have happened had his mother had her way.

Born on October 30, 1962, in Kingston, Walsh took to the game at seven when he joined the youth programme at the Melbourne club, intending to spin batsmen out. A career in cricket was never in the scheme of things for Walsh's mother. She fancied "something solid" like an accountant’s job for her son. But the lad stuck to his task. At school Walsh began bowling quicker but still fancied himself as a legspinner. At the Excelsior High School, the ability to bowl fast took him away from his first inclination

Walsh arrived on the domestic cricket competition, Shell Shield, scene in 1983-84. With the Benson & Hedges World Series Cup on in Australia & Holding, Garner, Marshall, Davis and Baptiste playing there and with the rebel players banned (which meant Croft, Clarke, Alleyne, Julian and Stephenson) a number of youngsters like Walsh got an opportunity to showcase their talent. Walsh grabbed the chance with both hands taking the most (30) wickets at 20 apiece. This helped him clinch a spot in the West Indies tour to Australia in 1984-85. He had earlier toured England in 1982 and got inquiries from the English League with whom he started his association in 1983. He continued with Gloucestershire in 1984, a relationship which came to an unsavory end in 1998 when the county refused to extend his two-year contract citing his non-availability for the season.

The Gloucestershire incident was one of the few "lows" he encountered in a career which encompassed plenty of "highs". Walsh has been witness to events from the heady days of the 80s when the all-conquering Windies were on the rampage to the present hard times. The West Indian cricketing fortunes might have shown a fluctuating trend but Walsh’s bowling has been a constant. From providing support to the likes of Holding, Marshall and Garner to forming a deadly combine with his recently retired new-ball partner Curtly Ambrose. His sustained success is testament to his amazing levels of fitness, skill and determination.

From his first Test scalp of Graeme Wood to the 500th victim in Jacques Kallis, Walsh has been gradually clocking up milestones which have led him to cricketing immortality. It took him 80 matches to join the 300-wicket club in1995, making him the tenth man to join the elite group. Then he became the leading West Indian wickettaker, overtaking Marshall’s haul of 376 in 1998-99. The next and epochal moment came in March last when he surpassed Kapil Dev’s world mark of 434 in his 114th Test against Zimbabwe. Thereafter it has been a battle against his self in a bid to set higher goals.

For all his exploits on the field the returns have been far greater for Walsh off it. The "Order of Jamaica", the diplomatic passport with the official designation of ambassador at large, the citation reading "Some men are born great, some have greatness thrust upon them and some achieve greatness. Courtney Andrew Walsh, through your skills as a fast bowler, you have achieved greatness as the most successful bowler in the history of Test cricket," presented by his Melbourne club, the two poems – "Courtney Walsh" and "Melbourne Man" written in his honour or even women voting him as the sexiest West Indian cricketer are some of the returns the game has given back to its illustrious player. But the man is his humble self. "I try to listen to my body and work along with it. One of the main things for me is love for the game and the other trying to do a job for the team. Once I’m enjoying both, it makes the job much easier."