"There was a bard of great fame/'Sacrifice-King' was his name/Artists make a living/use his kriti-s for singing/But he gets no fee, true to his name!/(No royalty to a raja? Is it not a shame?") 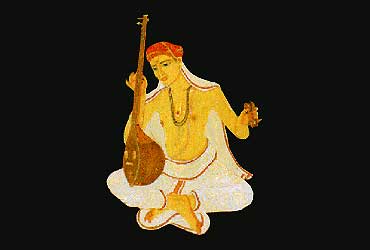 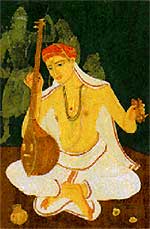 The modern concert format (kaccheri paddhati) as we know it evolved in the earlier part of the 20th century. The format consists of several compositional varieties like varnams, kritis, pallavis, padams, javalis, tiruppugazhs and so on. However, in addition to these largely preset parts of the concert, there are also creative and improvisational forms, namely raga alapana (expositions of raga without rhythm), neraval (extempore melodic and rhythmic variations of specific lines in a composition) and swarakalpana (singing of solfa or swara syllables, often with rhythmic embellishments). Both of these components of modern Carnatic music owe much to Tyagaraja, undoubtedly the most influential vaggeyakara or composer in the annals of Carnatic music.

Up to the late 19th century, the primary location for performances of art music was at the abodes of kings and other rich patrons. These concerts were centered around ragam-tanam-pallavis, elaborate exercises in musical creativity usually in major ragas like Sankarabharanam, Todi and Bhairavi. In contrast to these were the more widely prevalent devotional musical forms, such as bhajanas, where music was subservient to lyrics and the emphasis was largely on Bhakti.

However, beginning in the 16th century, composers like Muthu Tandavar and Margadarsi Sesha Ayyangar had experimented with the kriti format and the characteristic pallavi-anupallavi-charanam structure, one that was followed in Kshetragna’s padas. By the late eighteenth century, this format had been perfected by the "trinity" - Tyagaraja, Muthuswami Dikshitar and Syama Sastry - who combined the best of both the lyrical and pallavi traditions mentioned above.

Tyagaraja’s outstanding contribution to the advancement of the kriti format was the introduction of the sangati (lit. coming together) - a set of variations on a theme, gradually unfolding the melodic potential of the musical phrase. Largely set in the madhyamakala (middle tempo), Tyagaraja’s kritis were more appropriate for the modern concert paddhati. Vidwan G. N. Balasubramaniam, for example, observed during his presidential address at the 32nd conference of the Music Academy, that nearly 60% of Tyagaraja’s kritis are composed in the madhyama kala (middle tempo) and this speed "seems to be the best for both the lay and the learned listeners."

Tyagaraja’s compositions also spanned a range of complexity, from simple unchhavariti kirtanas that he sang during his ritual morning walk seeking alms, to elaborate pancharatna kritis or chauka kala kritis like O Ranga sayi or Kaddanu Variki. Musicians can therefore structure their concerts around compositions of Tyagaraja (and several other composers, many of whom followed in his footsteps) involving multiple ragas, talas and tempos.

This variety was made possible through the virtual explosion of new ragas in the 18th century following Venkatamakhi’s celebrated Chaturdandi Prakasika (ca. 1660) and his 72 melakarta scheme of classification. Following and furthering the work of Venkatamakhi, Govinda (Govindacharya), in his Sangraha Chudamani (late 17th - early 18th century) introduced the sampoorna melakarta scheme as well as lakshanas for 294 janya ragas, many of which were unknown. Where Purandaradasa and musicians of his generation had perhaps a couple of dozen ragas to work with, Tyagaraja could experiment with hundreds.

Indeed, Tyagaraja seems to have adopted composing in new ragas as one of the aims of his musical career. The (approximately) 700 known kritis of Tyagaraja feature 212 ragas; 121 of these ragas have only one kriti in them. He was the first to compose kritis in "about 66 ragas". His enthusiasm for such ragas can be seen from the fact that even among the last few kritis that he is believed to have composed, three are in new ragas: Vagadeeswari (paramatmudu), Ganavaridhi (daya juchutakidira) and Manohari (paritapamu ganiyadina).

By composing excellent kritis, Tyagaraja gave life to these new ragas. From being mere descriptions in a book (with at best a lakshana gita), these scales became full-fledged ragas capable of being sung elaborately in concerts. Tyagaraja, it must be remembered, was not only a composer but also a musician par excellence. Prof. P. Sambamoorthy narrates a story that sheds some light about Tyagaraja’s prowess as a performer. When Tyagaraja visited Madras on his way to Tirupati, he stayed at the house of Kovur Sundara Mudaliar, a musical patron. Madras, at that time, was on its way to becoming a musical center. For six evenings in succession, Tyagaraja sang the raga Devagandhari elaborately following it up with one of his compositions in the raga. This incident testifies to the creative ability or manodharma of Tyagaraja, the musician.

During the period before the trinity, because of the fact that the focus in musical performances was on ragam tanam pallavis, mainly featuring a limited number of major ragas, "minor ragas" were not explored. The explosion of kritis by the trinity and their musical followers allowed for the exploration, and codification of such exploration, in a much larger number of ragas.

However, in many minor ragas, Tyagaraja’s compositions provide the inspiration for further experimentation and elaboration. Latter day composers have created kritis in these ragas and musicians have sung or played elaborate alapanas, neravals or swarakalpanas. Several of these ragas have been used in film music as well. Some examples are provided in our article on the South Asia Women’s Forum.

Tyagaraja pioneered the use of several melakarta ragas like Ramapriya (52), Dhenuka (9), Kiravani (21) and Chakravakam (16). "Tamizh Thatha" U. V. Swaminatha Iyer recounts the incident when Maha Vaidhyanatha Iyer sang Chakravakam elaborately to the puzzlement of the many famous musicians. Reflecting the fact that Maha Vaidhyanatha Iyer was a grand disciple of Tyagaraja, Peria Vaithi, one of the prominent musicians present, referred to this raga as "Tanjavur sangati". In addition, Tyagaraja also composed in many vivadi melas such as Naganandini (30), Jhankaradhvani (19), Gangeyabhushani (33), Manavati (5) and Vagadeeswari (34).

Tyagaraja also invented new kinds of ragas. Prior to Tyagaraja, as a rule, all ragas had at least 5 swaras in the arohana and avarohana. Tyagaraja invented two ragas, both of which have only 4 notes in the arohana: Vivardhani and Navarasa Kanada. However, to "make up", both have 6 notes in the avarohana. Since then, composers like Balamuralikrishna have experimented with ragas that have only 4 notes in both arohana and avarohana.

One important reason behind Tyagaraja’s lasting influence on Carnatic music is the role played by his many disciples in popularizing his music, and thus in popularizing the new ragas that Tyagaraja pioneered. Some of them have offered their tribute to Tyagaraja in the form of kritis expressing his greatness. Examples are swamiki in the raga Devagandhari (a favorite of Tyagaraja, as mentioned earlier) composed by his cousin and disciple Manambucavadi Venkatasubba Iyer, and satguru swamikki in the raga Reetigaulai by Ramanathapuram (Poochi) Srinivasa Ayyangar, a disciple of Venkatasubbayyar’s student Patnam Subramania Iyer, and thus a great grand disciple of Tyagaraja.

Classical or art music is what it is because of two factors: a clear set of rules that codify the results of extensive experimentation with musical aesthetics, and creativity within these musical rules. A composer’s creativity is evident in his or her compositions. The performer’s creativity, on the other hand, is displayed during expositions of raga alapana, neraval or swara kalpana. However, this creativity cannot arise from a vacuum, but rather from the musical output of earlier performers (teachers, in particular) and composers. Thanks to his wonderful compositions, Tyagaraja has been, and for at least the foreseeable future will be, the greatest influence on musical creativity and raga music in Carnatic music. For this reason, musicians owe him a great debt of gratitude, as pointed out by S. Pasupathy through this amusing limerick:

"There was a bard of great fame
'Sacrifice-King' was his name
Artists make a living
use his kriti-s for singing
But he gets no fee, true to his name!
(No royalty to a raja? Is it not a shame?)"


We acknowledge discussions with Ram Naidu, S. Pasupathy, Geetha Sivaraman and Sumitra Ranganathan. An earlier version of this article, with audio clips, appeared in the South Asian Women’s Forum