A tragedy always tests one's mettle and the catastrophic tsunami is India's trial by fire. India is both victim and saviour, but by responding quickly to neighbours in need, it has emerged as a much-needed regional anchor. 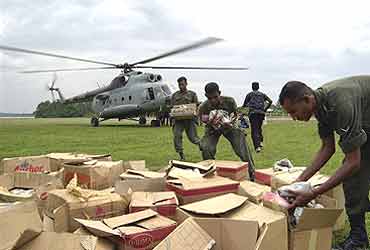 A tragedy always tests one's mettle and the catastrophic tsunami is India’s trial by fire. India is both victim and saviour, the dual role stretching its resources and manpower thin. But by responding quickly to neighbours in need and, in fact, dispatching a ship the same day to Sri Lanka to help clear ports, India has emerged as a much-needed regional anchor. Around ten Indian naval ships are in Sri Lanka, the Maldives and Indonesia doing the hard work even as the government deals with the devastation in Tamil Nadu and Andaman and Nicobar. The US and Indian navies are for the first time working together in the Indian Ocean in another sign of their growing cooperation.

India’s ability to rise above its own massive difficulties and reach out on a large scale hasn’t gone unnoticed. The increasingly confident India is willing to play a bigger role and be a partner of the west. Apart from the obvious good neighbourliness of the gesture, India is shedding its old diffident skin. Projecting into the future, it is showing it has both the mettle and the muscle to do some heavy lifting. It is soft power supported by hard resources. Helping in times of need can win friends and influence countries. Sure, there are geo-political calculations but why shouldn’t there be?

Geopolitics and proximity have merged to induce an appropriate Indian response. An Indian Coast Guard ship with search and rescue equipment and a Dornier aircraft with a medical team reached Sri Lanka on Sunday, Dec. 26, the day the tsunami hit. The next day two other naval vessels, including a hydrographic ship to clear harbours, reached Sri Lanka while three other ships arrived on Dec. 29. Most of them have helicopters on board. In addition, two Indian warships INS Sarvekshak and INS Sutlej also sailed to Sri Lanka today with the Indian army moving an entire field hospital just outside Galle which is working round the clock to treat patients.

Geography was India’s advantage and a quick, sure-footed response was appreciated. The US aircraft carrier and medical ships will take some time to arrive simply because of the distances involved. Having learnt from the Gujarat earthquake, Indian officials sent supplies tailored to the disaster -- they knew that Sri Lanka would need power generating equipment to store medicines and other temperature-sensitive equipment. Watching India’s swift response, Indonesia asked for a hydrographic ship as well and INS Nirupak arrived in Bandar Aceh on Jan. 3 while INS Khukri carrying relief supplies left Chennai and reached Indonesia a day later.

India’s new role will take some getting used to, specially by those who dismiss New Delhi as a vacillating and often uncertain voice in world affairs. No surprise then that some in the west have interpreted India’s refusal to ask for aid as a hangover of non-alignment simply because the current government has a few old horses from that era. A western news agency report last week speculated on the very subject, sparking debate among Indians living abroad. Many Indian Americans, eager to help, saw New Delhi’s decision as misguided. Others saw it as arrogant. But the news report was plain wrong.

Those who see a return to non-alignment by the current government insult the dogged pragmatism of the recently departed J.N. Dixit, who as national security adviser was busy forging alliances, crafting deals and securing India’s national interest no matter what the alignment.

It is neither non-alignment nor arrogance but a straightforward monetary calculation. As a creditor nation and one sitting atop $110 billion in reserves, should India be taking a slice of international aid commitments and reduce the share of others? India is open to multilateral aid but has declined bilateral aid. For the sake of perspective, it would be useful to remember the Gujarat earthquake, the Orissa super cyclone and the controversy over the Vajpayee government refusing assistance from eighteen countries, most of them European, but also including Australia, New Zealand and Japan.

Security and geo-political considerations apart, particularly in the Andamans and Nicobar, the overwhelming response from Indians and Indian organisations in the country has been heartening, helping India take the stand it has. There is a larger issue as well -- the country has begun to believe in itself and act accordingly. In order to cross firmly into the ranks of donors, Indians have to believe they can do it without outside help. Before the tsunami hit, Montek Singh Ahluwalia, deputy chairman of the Planning Commission, had proposed spending $5 billion a year from India’s foreign exchange reserves on infrastructure needs. The argument put forward was simple: Why accumulate money and subsidise the American economy since most of the money is invested in low-yielding US treasury bonds? Why not spend it in big public sector projects? It may be time to act on his proposal.

There has also been carping about the "core group" allegedly undermining the United Nations’ relief efforts. India was asked by the US to be a member of the core group based on the prompt help and accurate assessments provided by the military of the scale of the disaster. The core group has done everything to keep the UN apprised and conducted teleconferences with UN Secretary General Kofi Annan to brief him on what is being done. For once, it would seem, the Bush Administration wasn’t trying to undermine the UN, but attempting to respond quickly because of fierce criticism at home of its slow and small response. European leaders who are complaining about the core group can be more productive by becoming part of the chain of help.

Foreign secretary Shyam Saran has done well today to state the Indian position that there isn't any "misunderstanding or misapprehension" about the presence of US marines in Sri Lanka. Rumours about Indian concerns had done the rounds, but he was on the ball: "There is a disaster. There is requirement for assistance and if the US believes it could contribute to this task, it is more than welcome... The question is how efficient is the delivery system. We should not get into each other's way in carrying out this job."

Saran has also reiterated the Indian position on aid refusal: "It is not not a dogmatic position. At any time we need the support of friendly countries, we will review it." That seems to be the most pragmatic way of handling the situation. In view of the enormity of the loss of lives and damage suffered by other countries like the Maldives, Indonesia, Sri Lanka and Thailand, India rightly felt that international efforts were better directed at those who needed it more.

External affairs minister K. Natwar Singh is already in Jakarta to represent India at the special ASEAN Summit to discuss the aftermath of Asia's devastating natural disaster. India is expected to make a further pledge of money in addition to the $26 million already committed to Sri Lanka, Maldives and Thailand. This is apart from aid in kind and the use of military equipment, flights and ships. The mature Indian response reflects the new role India has begun to play on the world stage.

While the core group played a useful role of initiating a quick response to the disaster, the focus has now shifted to the operational level and the UN is best placed to undertake this phase. There is enough to be done and all can be expected to remain busy for months and then some.