Is it a mere coincidence, or can the rapid decline of cities - that were once the bastions of thriving, vibrant energy - be linked to the trends towards obscurantism, illiberality and intolerance, evidenced in the recent waves of 'moral policing'? 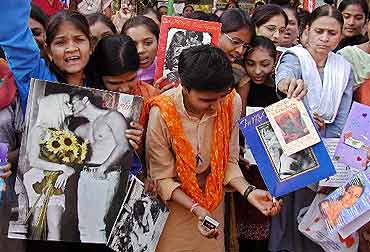 outlookindia.com
-0001-11-30T00:00:00+05:53
A couple of innocuous remarks by actress Kushboo about premarital sex led to her arrest and 20 legal cases, all of which were preceded by days of mob violence and threats to drive her away from Tamil Nadu. The only person to come forward in her support was actress Suhansini Maniratnam, who had to back down hurriedly as the mobsters threatened to direct their irrational ire against her as well.

In December 2005, in Meerut town, young couples in a park were severely roughed up, slapped around and dragged by the hair, all the result of a brilliant public exercise by the police - ‘operation majnu’ - which aimed at restoring ‘public decency and morals’

In September 2005, intimate pictures of a couple caught in a lip-lock while dancing at a luxury hotel in Chennai led to the suspension of the hotel’s license, though this was later renewed with ‘very strict’ conditions.

The Vice Chancellor of Anna University, Chennai, D. Viswanathan, has issued a ban on the use of cell phones and prescribed a dress code for students in 227 engineering colleges which bans ‘tight fitting outfits, skirts or sleeveless clothes and jeans’. His reasoning? "These clothes distract students from academic pursuits".

The thriving night clubs of Bangalore have been told not to play music that ‘provokes dancing’. "Nightclubs have been told to play classical music", rues Amardipta Biswas, the Secretary of the Bangalore Resto-Lounge Bar and Discotheque Owners Association. As couples sway to the throbbing music they are told that they can be arrested - and nightclubs can only remain open till 11.30 pm.

In June 2005, the vice-principal of Kirori Mal College at Delhi also saw fit to introduce a dress code. His advice was that the students from the Northeast, in particular, should wear Salwar Kameez ‘to prevent sexual harassment’.

And in a much publicized campaign, the city of Mumbai launched a drive against ‘dance bars’ - throwing thousands of girls out of work, and many of them into certain prostitution.

With the exception of Meerut, all the other cities in these random examples would be listed among India’s foremost cities, long known for their cosmopolitanism and liberalism, which in turn fostered and engendered the wealth of these cities. So what is going on here? Suddenly these bastions of thriving, vibrant energy are being swept by waves of ‘moral policing’. Is it a mere coincidence, or can the rapid decline of these cities be linked to these trends towards obscurantism, illiberality and intolerance?

Today, Banglore is a pitiful city and bears no resemblance to the vaunted Indian 'Silicon Valley', which saw the eruption of a new and youthful culture, as thousands of talented young professionals poured in and grasped the many opportunities the city had to offer. For decades before that, Mumbai was the place to go for creative young professionals, with a milieu that was comparable to the cosmopolitanism of New York or London. Yet it was Bombay that became one of the first among major Indian cities to buckle under the forces of narrow communal fanaticism dictated to by the collapse of reason and driven by the sheer cunning of stupidity.

Under the BJP-Shiv Sena combine, Mumbai progressively clamped down on every form of free expression and entertainment, banning rock shows, burning film posters, instituting legal proceedings against ‘nude’ and ‘obscene’ models, and following up with oppressive levels of moral policing that had never before been witnessed in India’s commercial and glamour capital. But the successor Congress government has been no better, with its infamous crackdown on ‘bar girls’, continuous and arbitrary police action against couples on promenades under Section 294 of the Indian Penal Code, which deals with ‘indecent exposure and obscenity’.

All this is happening at a time when the country is witnessing urbanization at a scale never seen before, with millions pouring into cities and urban centres, which swell from mofussil towns into megaoplisis. This new urbanism - in which cities are unnoticeably competing - is producing a booming economy and creating enormous wealth.

As the new trend of ‘moral policing’ takes city after city in its grip, it is crucial that we realize that an inward looking city, governed by bigots, is not one that can generate a positive atmosphere for growth, attracting all the elements that make a city viable and prosperous. Experts today argue that the new centres of prosperity will be ‘the creative city’. Indeed, decades ago, Jane Jacobs noted that the ability of cities to attract creative people was the greatest spur to economic growth. And in his book, The Rise of the Creative Class, Richard Florida examines the phenomena of ‘cities without gays and rock bands’ losing out on the race for economic development.

Florida notes that, "Members of the creative class do a wide variety of work in a wide variety of industries - from technology to entertainment, journalism to finance, high end manufacturing to the arts. They do not consciously think of themselves as a class. Yet they share a common ethos that values creativity, individuality, difference and merit. More and more businesses understand that ethos, and are making the adaptations necessary to attract and retain creative class employees - everything from relaxed dress codes, flexible schedules and new work rules in the office to hiring recruiters who throw Frisbees. Most civic leaders, however, have failed to understand that what is true for corporations is also true for cities and regions: Places that succeed in attracting and retaining creative class people prosper; those that fail don’t."

This is certainly one principle that most of our politicians and planners show little evidence of having grasped. In the wake of the many ambitious schemes and plans for the ‘revitalization’ and ‘renewal’ of our cities, there is not a single message to suggest that encouraging creativity and the culture of liberalism would be part of the new vision, and not a single message has gone out to suggest that there would be zero tolerance for the rising culture of moral policing. The connections and consequences of this blind spot, and its role in destroying a city are still to hit home.

The late economist, Mancur Olson, had once noted that the decline of nations and regions is a product of an organizational and cultural hardening of the arteries - he called it "institutional sclerosis". Places that grow up and prosper in one era, Olson argued, find it difficult and often impossible to adopt new organisational and cultural patterns, regardless of how beneficial they might be, and in this lie the seeds of their decay.

Across India’s cities, we are seeing the regression of organizational forms and cultural patterns, as rabid, narrow minded groups attempt to force and impose their warped codes on an intelligent and hardworking people who are just going about their businesses and trying to enjoy what they can of their lives. Some of these cities are now already seeing an exodus of the talented and the creative, as they flee from repressive atmospheres into more open minded cities.

We are yet to realize the full import and dimensions of a ‘creative city’. As Florida has also pointed out, these go well beyond the traditional physical attractions that most city administrations focus on - shopping malls, freeways, stadia, the sprucing up of tourist attractions and the creation of entertainment districts that increasingly resemble theme parks. Such physical infrastructure is becoming increasingly irrelevant, as it fail to attract or inspire the creative classes, and to create the cultural vitality that lies at the heart of the productive city. The creative city thrives because creative people want to live there - when that desire begins to diminish, the death of the city is foretold.