Plainly put, Ravi Dayal (1937 - 2006) was one of the great editors of his time: the sort of expertise he brought to the printed word simply doesn't exist any more, not just in India but anywhere. 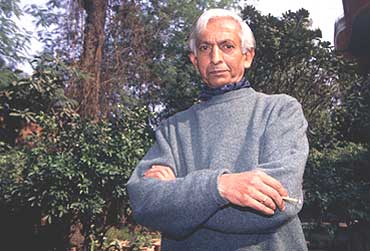 Ravi Dayal died within 24 hours of surgery for a cancerous growth in the lungs on Saturday, June 3.

Ravi Dayal started publishing my books nearly twenty years ago, at a time when there were very few English language publishers in India. Soon enough, the situation changed dramatically, but Ravi remained untouched by the currents: he was like one of those great rocks in the streams of his beloved Kumaon - a force that stood immovably against the flow. While everywhere around him the talk was of inventories and advances, computerization and shelf-space, Ravi continued at his own stubborn and painstaking pace, paying close attention to every word on every page that appeared under his name. His was a mill that ground slow but awful sure, and a manuscript that had passed under his pen was a thing of beauty, in which no comma or semi-colon was allowed to stand without accounting for its existence. It was no easy matter to slip an ellipsis past his hawk-like eye: he was scornful of the implications of vagueness that lie behind those three little dots, so beloved of fabulists. As for split infinitives, he was their Grim Reaper, his nib the instrument of their perdition. Plainly put, Ravi was one of the great editors of his time: the sort of expertise he brought to the printed word simply doesn’t exist any more, not just in India but anywhere.

It was never Ravi’s intention to found a large publishing house. He was content to issue some half-dozen titles a year and he was adamant that he did not want his company to grow to a size where he might need even a single permanent employee. Ravi was a perfectionist and he liked to do everything himself, from receiving a manuscript at his door, to delivering it to the printer. The arrival of his royalty statements were events to look forward to: meticulously accurate and punctually delivered, they were always written in his own hand, in the beautiful flowing script of another era. Yet, for all his gentlemanly, old-fashioned ways, Ravi was also a tough-minded professional and he more than held his own against the behemoths of the marketplace. This was not something that he would have wanted to be widely known - for no one understood better than he, that there’s more to life than making a big noise - but it was true nonetheless. And the reason why his company flourished was that he cared nothing for success or failure: for him publishing was its own reward - it was what he loved to do and that was, for him, the best possible reason for doing it well.

As a man and as a publisher, Ravi was defined by integrity, taste, reticence and decency. His passing represents the end of an era in Indian publishing: I will miss him dearly.

Amitav Ghosh needs no introduction, but it was Ravi Dayal who introduced him to the reading world with his imprint, Ravi Dayal Publishers, and remained the Indian publisher for all his books.