'The Law Has Done Its Duty'

The Supreme Court strikes down Jayalalithaa's appointment as CM -- making her the first Indian Chief Minister to have to thus resign. 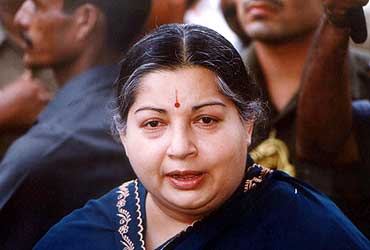 AIADMK supremo Jayalalithaa resigned as Tamil Nadu Chief Minister shortly after the Supreme Court struck down her appointment as "not constitutional" in view of her conviction in a corruption case carrying a sentence of more than two years.

An unfazed Jayalalithaa told reporters after meeting the Governor that she would stage a comeback as the Chief Minister once she is cleared in corruption cases.

The AIADMK legislature party, which has over two-thirds majority in the state assembly, met in the evening to elect Revenue Minister in the outgoing ministry O. Paneerselvam as the new leader of the AIADMK Legislature Party, amidst speculation that the choice could fall on one of the Ministers or a non-MLA.

Earlier in the day, the majority judgement pronounced by Justice S.P. Bharucha held that Jayalalithaa's appointment on 14 May 2001 was not valid and not in accordance with the constitutional provisions. "We therefore quash and set aside the appointment of respondent to the post of Chief Minister," Justice Bharucha, Justice Y.K. Sabharwal and Justice Ruma Pal held.

This verdict came on a batch of six petitions challenging the then Governor Fathima Beevi appointing Jayalalithaa as Chief Minister despite her conviction under Prevention Of Corruption Act in the aftermath of AIADMK alliance sweeping the polls in Tamil Nadu.

Jayalalithaa has been convicted in two Tansi land case in which she was sentenced to more than two years imprisonment.

The other two judges Justice G.B. Pattanaik and Justice Brijesh Kumar, though gave separate judgements, agreed with the findings in the majority judgement thus making the verdict unanimous.

Meanwhile, former Tamil Nadu Governor Fathima Beevi defended her action in appointing Jayalalithaa as Chief Minister in May last holding that that she took the decision according to her understanding of the law as it stood then.

"The decision was my own. I took it after considering various aspects like law and order in the state and the election results giving a massive mandate to the AIADMK", Beevi said, reacting to the Supreme Court order quashing the appointment of Jayalithaa as Chief Minister.

"I took the decision according to my knowledge, belief and conviction about the legal provisions as I understood at that time and as the law stood", Beevi, a former Supreme Court judge, said.

When asked about the Apex Court's observation that the "Constitution is supreme and not the people's will", Beevi said "The Supreme Court intrepreted the Constitution and has declared the law of the land, Everybody is bound by it. It is the function of the Supreme Court to consider these matters."

Holding that she had "no regret" about the decision she had taken as Governor, Beevi said "My main consideration was to see whether a stable government could be installed. There was no alternative also."

Beevi said she made a non-member of the Assembly as Chief Minister by invoking a special provision, Article 164 (4), in the Constitution after Jayalalithaa was elected as the "only leader" by AIADMK legislators.

She said the decision was her own, based on the law then and there was no need to consult the Centre before arriving at the decision.

"The Governor has to take a decision looking into various aspects, Beevi said, adding "I have complied with the Constitutional provisions as I understood them".

The former Governor, however, said she was not making any detailed comment on the judgement without going through the full text.

"Law has done its duty" was the sharp comment of the DMK president M. Karunanidhi.

He told reporters that "I do not want to say anything more than this. Law has done its duty".

Asked whether the verdict had brought a constitutional crisis in the state, he said "Constitution will never face a crisis. Some politicians may face a crisis now", he said.

He said the DMK's stand that a convicted person, who had been disqualified to contest the polls could not occupy the Chief Minister's chair, had been vindicated now.

Asked whether he was satisified with the judgement, Karunanidhi said all those who studied the law well would be satisfied.

He said Jayalalithaa, who was aware of the fact that no person should file nominations for more than two constituencies, had "willingly" filed nominations for four seats and her nominations were rejected on that count also.

The Congress preferred to brush aside questions.

"We do not make political comment on judgements delivered by Supreme Court. Jayalalitha is the leader of a friendly party, AIADMK, which on its own enjoys absolute majority in the Tamil Nadu assembly", party spokesman S. Jaipal Reddy told reporters.

To a specific query on the former Governor Fathima Beevi's decision of appointing Jayalalitha as Chief Minister, he said the judgement speaks for itself whether the Governor was right or not.

He disputed suggestions that the judgement was a setback to the party which had supported Governor's action of making Jayalalitha as Chief Minister.

Asked whether there were''grey areas'' in the case, he said if it was so, it was for the political parties and Parliament to deliberate on them.

''We are not (not) in the habit of giving any unwarranted advice to anybody'', he said when asked what advice the Congress would give to AIADMK in view of the apex court judgment.

The Union Minister for Law and Justice, Arun Jaitley, welcomed the judgement

Jaitley said here that the disqualification would send an important message, that a person who is convicted should be debarred from contesting elections and holding any constitutional office.

BJP party general secretary Sunil Shastri said "The party had been saying right from the beginning that a wrong decision has been taken by appointing Jayalalithaa as Chief Minister by the Governor overruling theprocedural setup in the Indian Constitution. The judgement has come upholding the view we have held from the day she was appointed."