No, we are not talking smuggling, but films. No, not controversies involving underworld finance of the Mumbai film industry or extortion money demands, but a rather more positive collaboration... 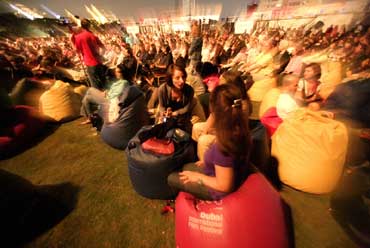 The names Mumbai and Dubai mentioned in a single breath still conjure up a series of associations: an international grey market, Bollywood nights, controversies involving underworld finance of the Mumbai film industry and extortion money. It was not that long ago that the name of Dubai was omnipresent in Mumbai’s film world, before there emerged a concerted move to legalise film finance and corporatise Hindi cinema.

Now that corporatisation seems to have become the order of the day for the Mumbai film industry, the name of Dubai is cropping up again, but in a very different context. This time around, the links seem to be in tune to set up a rather more positive connection.

It is well-known that Indian films have a regular market in West Asia, both among the South Asian diaspora as well as the local population. The Indian expatriate population in West Asia is one of the largest in any part of the world, and the presence of this diaspora has, over the years, worked to give Mumbai cinema a presence in local society.

A professor of Middle-Eastern (as the Americans and Canadians call West Asia) studies at the University of Toronto once mentioned that Hindi films had been quite a part of his growing up years: it used to be quite a social event when his family went to the movie theatre to watch a ‘Bollywood’ film, though in those days, no one really used the term Bollywood.

It appears that children of many upper class families in West Asia are familiar with the world of Hindi films, courtesy their Indian nannies, who are quite a brigade in these parts. In that sense, however, West Asia at large has been no different from other parts of the world where Hindi cinema has made for a niche culture, more so in the contemporary age of a global ‘Bollywood’. Where West Asia has the potential to make a significant difference vis-à-vis its already existing Bollywood link is in its latest investment in a film culture which aspires to be both local and international, and its aspiration to evolve as a contemporary cultural hub.

The Dubai Film Festival, first organized in 2004 with a theme of ‘Bridging Cultures Meeting Minds’, best exemplifies this blend of the global and local in the contemporary West Asia. On the one hand, the festival has been geared towards the nurturing of Arab cinema, on the other it aims to be a major international event at par with similar international events across the world.

This mix of the global and local has a most culturally-proximate repository in Bollywood/Hindi cinema. ‘Bollywood’ has now become a global brand, ironically, for its song-and-dance prototype, which was considered kitsch for many years in the past in relation to the realist cinemas of the West, but is now increasingly being assessed in terms of its unique aesthetic.

With West Asia, especially Dubai, looking to nurture a film culture which is international, Mumbai can only be the next stop. Recently, the Dubai-based Infinity Holdings signed a multi-million dollar joint venture with Yash Raj Films for the creation of an entertainment district in Dubai, which is now being considered a strategic location by Bollywood corporates.

Not only Dubai, other countries of West Asia should soon be increasingly attractive to Bombay producers, given that West Asian governments are now doing their best to promote film enterprise. Jordan immediately comes to mind for being a country blessed with superb natural locations offering a range of cinematographic possibilities. With the Jordanian government working to build the country’s film industry, Jordan could easily start competing with Europe and Australia for a share of Bollywood’s foreign locations.

Many of Bollywood’s leading production houses moved to Australia in recent years in search of exotic shooting locations, and in a bid to offset the costs of shooting in Europe or North America. Yash Raj Films, which popularized the ‘foreign’ location in Bollywood films through its almost patent Swiss locations (Yash Chopra has a lake dedicated to him by the Swiss government for his role in promoting Swiss tourism through his films) has increasingly begun filming in Australia.

Contemporary blockbusters, such as Dil Chahta Hai, Salaam Namaste, Heyy Babby and Chak De India have been shot on Australian locations. Like Australia, which threw up a range of new hot spots for Hindi film producers, who used be somewhat fixated on Switzerland and Europe, West Asia with its new initiatives in the field of film enterprise, seems to be destined to be the next new destination for Bollywood.

The added advantage for Hindi film industry vis-à-vis Dubai or Jordan would be the relatively low cost of local crew and
production services in relation to Europe or Australia, as also a degree of cultural affinity with the region. With Bollywood budgets sky-rocketing in recent years in terms of star prices, technological innovation and marketing, the industry would most certainly find it advantageous to avail from international linkages closer to home with greater potential for cost-effectiveness.

For Dubai or Jordan, a model could be Malasia’s new film city, set up with the specific purpose of providing sophisticated production and post-production facilities to Indian producers, for whom Malaysia has been a favorite shooting location in the recent past. This includes Hindi film producers, as well as the Tamil and Telegu language industries of the South.

With its cultural proximity to large parts of South Asia, West Asia figures as a leading contender in Bollywood’s growing international nexus. Both regions are a part of that configuration which may be termed the "global south", and Mumbai and Dubai together have a potential to crystallise industrial structures that may well prove to be a viable counterpart to Hollywood.

India is one of the few countries in the world where Hollywood has been unable to make a significant incursion vis-à-vis the dominant Hindi and regional cinemas. On the other hand, Bollywood of recent years has heightened its potential to reach global audiences on the basis of increasingly sophisticated distribution and marketing systems. This combination of ‘local’ culture and global potential is what, at this point, aligns Mumbai with Dubai and West Asia in general.