The Business Of Religion

For Indians, religion has always been transactional. I went to Kashi a couple of months ago and everything had a price in this, the most ancient city of Hinduism. 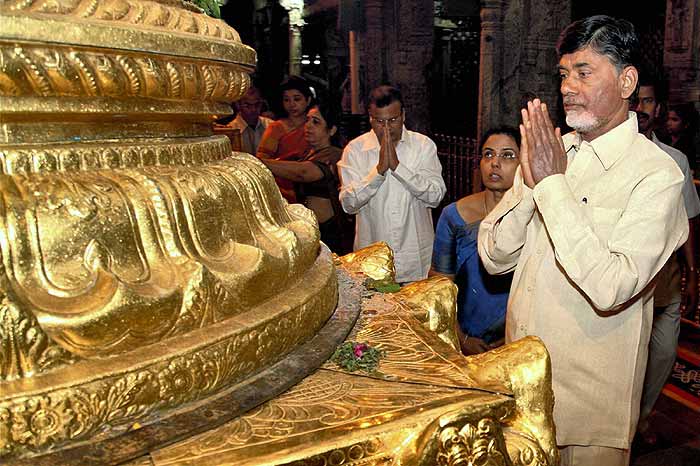 Next year will mark the 500th anniversary of the Protestant Reformation, when one man's protest changed Christianity in Europe. I was reminded of that by two stories published recently in India on the same day. On May 25, in Andhra Pradesh, it was reported that the income of temples has grown by 27 per cent. Chief Minister N Chandrababu Naidu attributed this rise to "growing sins". He said "people are committing sins and to get rid of them they are going to temples and offering money."

That same day, another story, from Udaipur, was published with the headline: 'A holy dip and Rs 11 is all it takes to be certified free of sins'. The report said that priests at a Shiva temple in Rajasthan were offering a certificate for being 'paap-mukt', or sin-free, to those who paid Rs 11. Of this money, a part would also ensure the 'dosh-nivaran', meaning the removal of future obstacles.

The explanation was that everyone sinned, even the innocent. One priest said that "when people do farming, they inadvertently kill insects and other creatures, damage eggs of birds and reptiles. This fills them with guilt. They come here with a heavy heart, but go back relieved."

The tradition of priests taking money on behalf of god is a universal phenomenon, and as I said, it was happening in Europe 500 years ago on a bigger scale. The Roman Catholic church sold something called an 'indulgence'. An individual who paid money, usually a large sum, would have his punishment for his sins reduced in the afterlife. The sale of indulgences was marketed widely and in 1517, the Pope sent a man to Germany to collect money. This was to be used for constructing the St Peter's church in the Vatican.

In protest against this, one German priest wrote a note accusing the Catholic church of corrupting the faith. He said the pope had no authority to do what he was doing, and he nailed his note to the door of his church. The man's name was Martin Luther, and his act led to what is called the Protestant Reformation. This movement split Christianity and because of it today many European nations are no longer Catholic.

In India, just like in the Europe of Luther's time, religion is transactional. We offer money to temples in exchange for blessings. The rich Indians do not give cash, they give gold. Why? Because cash is spent by temples on prasad or doing some charitable work. Gold remains intact with god.

In June 2009, Karnataka minister G. Janardhan Reddy gave a crown of gold and diamonds worth Rs 45 crore to the temple at Tirupati, in Andhra Pradesh. According to the temple’s website, Tirupati got 3,200kg silver and 2.4kg of diamonds in just one year. It gets over 1,000 kg of gold a year on average. The temple encourages this and in 2011, those who gifted a kilo of gold, worth over Rs 28 lakh, got "VIP darshan" (which means cutting the queue) of the idol. Today, the temple offers a range of privileges against large sums of money, starting at Rs 1 crore. The list can be seen on this link: www.tirumala.org/Privileges.aspx

This information will not surprise many Indians, because we understand that religion in this part has always been transactional. I went to Kashi a couple of months ago and everything had a price in this, the most ancient city of Hinduism.

People were charged money for seating space during arti. Foreigners were charged large sums to hold the strings which made the bells ring at Dasashwamedh Ghat during the evening arti. In every place, pilgrims were treated like customers. And, this is important, the pilgrims did not seem to mind it.

Since this is the culture, we should not be surprised that very little charity happens in India for real causes outside of religion. But we should perhaps not despair too much. Giving money, particularly as philanthropy, meaning large donations from businessmen, is also a relatively recent phenomenon in the West. Till well into 19th century, almost no organised philanthropy was happening there. Rich businessmen would pay a fixed sum to the church. This sum, called a tithe, was sometimes around 10% of income. In 1889, the industrialist Andrew Carnegie wrote a work called The Gospel of Wealth, in which he argued that the rich were obliged to distribute their wealth to the poor. He said it was disgraceful for someone to die rich.

Many were influenced by Carnegie and today it has become the tradition in the West for the extremely wealthy to give their riches away before they die. People like Bill Gates and Warren Buffett are not rare.

And it is not just the super rich who do this. The average Dutch individual makes monthly contribution to seven charities. What about here in India? We all know the answer to that.

Till this changes in India, and we stop seeing religion as transactional and for selfish reasons, the reformation that transformed Europe will not happen here. We can only hope it doesn't take another 500 years.

Aakar Patel is the executive director of Amnesty International India. The views expressed here are personal.