The American Line Of Control

Since American and Indian interests don't converge, what are India's options?. Perhaps the "Clinton option" that relied on his uncanny sense of what people wanted on a particular day? 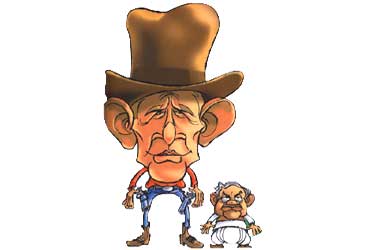 The Indian Prime Minister has spoken. On May 22, speaking with a grim determination, and displaying no hesitation in words as is his customary style, he told Indian troops that his presence at a forward military base in northwest Kashmir was a signal to everyone that India is about to embark on a new campaign and the time has come for a decisive battle .

Is India readying for a war with Pakistan? That would appear to be the obvious conclusion from all the rhetoric emanating from New Delhi. And yet, many feel that India is simply raising the ante to attract attention of Americans to put pressure on General Musharraf to stop, or markedly reduce, the jehad in Kashmir.

As has happened before, the first Indian reaction is: Do American policy makers know what Pakistani (intelligence-military) establishment is up to? And if they do, then why don't they do something about it?

For the record, yes, Americans know that the number of terrorist training camps in Pakistan-occupied Kashmir (POK), and the rate of infiltration of Pakistan based terrorists into India, have gone up since earlier curtailment ordered by Pakistan during the initial "with us or against us" campaign. In fact, the word on the "American street" is that Gen. Musharraf has facilitated the re-establishment of at least 50 jehadi terrorist camps in POK since March this year. Which leads to the next logical question: Is America going to do anything about it?

My answer is very simple. America will do anything and everything in the Indian subcontinent so long as it does not undermine Gen. Musharraf’s position to rule Pakistan. Or to put it bluntly, if India forces America to choose between Musharraf and Indian interests it will forgo the latter, albeit reluctantly.

Sounds incredible? Here is why.

The American position on the war against terrorism has taken a detour from the initial commitment that President George W. Bush made immediately following 9/11 tragedy. Like any other well meaning and principled stand, Americans started with a deep sense of grief and retribution against the guilty. But real-politick has moderated American goals.

Judging by the latest U.S. State Department terrorism report, the list of terrorist nations is mostly unchanged from previous years, even though none of the listed nations in the report have been linked to 9/11 attacks. In fact, the two nations that had past links with the al-Qaeda, and in many ways continue to maintain such connections within some sections of their official establishments, are Saudi Arabia and Pakistan. Neither of these two countries is on the list of U.S. terrorist nations.

On the contrary, both of these countries are frequently mentioned as "allies against terrorism". As much as Indians are incensed with American attitude towards Pakistan, the Israelis went a step further and distributed irrefutable proof in the American media about Saudi role in promoting terrorism. But the end result was the same as the American administration remained unmoved.

President George W. Bush does not wish to take any chances with his re-election. He only has to remember what happened to a former President after the euphoria and high public ratings following the Gulf War. Once real-politick entered into the war against terrorism, and the definition of terrorism was politicized to select and choose targets, the American campaign against terrorism lost its focus.

There is a saying that the devil is in the details. In the business world, professionals know that any assignment has two components - the first (easier) 80% component takes 20% of the time and the last (harder) 20% component takes 80% of the time. As the war against al-Qaeda enters the grinding phase, the success so far has been rather limited. Therefore it is no surprise that the Bush administration has shifted its focus elsewhere to retain favorable perceptions by the public. More public attention is being paid now by the Bush administration in developing the next terrorist target rather than in completing the job at hand. Of course, it would be different had the war against al-Qaeda been more successful.

There is a real possibility that as we approach the next Presidential election in the U.S., the situation will not be greatly different from today. The American military can not afford to leave the Afghanistan-Pakistan theatre without tangible success, and no such success looms over the horizon. At the time of the next Presidential election, Mr. Bush will re-emphasize the ongoing war against al-Qaeda and Taliban, and assure the American people that America will not withdraw from that region until full success is achieved.

So the last thing that President Bush or his advisors need today is uncertainty on the ground in Afghanistan and Pakistan that will in any way jeopardize the American presence there. While Afghanistan is a non-issue, in the case of Pakistan it is a different matter. With a disciplined military and a nuclear arsenal, Americans will not be able to stay in Pakistan without the acquiescence of Pakistani generals. Whether India likes it or not, Musharraf holds the key (may be not the only key, but an important one) that will affect President Bush’s re-election chances. Everything else is secondary.

Given the American compulsions, what can India gain by engaging in a war? If it is a "war to the finish", it may very well literally end that way for the two countries. If it is a "limited war", then its effectiveness will be limited too. But what, perhaps, Indians may not aware of is that if the Indian army crosses the line of control (LOC) in Jammu and Kashmir, it will have done Gen. Musharraf a favor and granted him his wish that he was unable to achieve during his Kargil and Agra misadventures. India would have unilaterally destroyed the sanctity of the LOC as the line of regional stability in Kashmir. This action will surely trigger big power intervention (through the United Nations) in Kashmir, and will have greater ramifications for India than currently foreseen by Indian security planners.

The sanctity of LOC is a major issue for Pakistan. They feel it has undercut their efforts in "restoring" Kashmir to Pakistan, and I have heard arguments that after the 1971 war, Pakistan did in fact accept the fait accompli in Jammu and Kashmir. At a recent (April 6, 2002) symposium on Kashmir in Washington DC, one of the Kashmiri Muslims challenged my argument that insurgency in Kashmir began in 1985, stating that insurgency was fueled by the rigged State general elections of 1987.

To my surprise, my argument was supported by the next speaker, Brig. (retd.) Feroze Khan of Pakistan, who said that it was the occupation of the Siachen Glacier by the Indian military in 1983-1984 that "brought Kashmir back on the radar screen in Pakistan". He said that the Pakistani military establishment in 1984 concluded that India had undercut the Shimla Agreement and, from their perspective, all options lay open for Pakistan as to how to avenge the Siachen defeat. The rest, as they say, is history.

The stepped up mix of Indian rhetoric and military activism from Vajapayee and Advani these days reminds one a lot of "forward basing" engaged by Nehru and Menon during 1962. While today India is clearly a military power of reckoning, the chances for miscalculation are no different today then 40 years back. India, it would seem, has trapped itself in pursuing the military option, whether or not it really intended to.

How does India proceed from here? I would like to suggest the "Clinton option" that relied on his uncanny sense of what people wanted on a particular day, as his actions were always dictated by the results of daily polls. Such an action consists of three parts:

I think this is the best scenario under the circumstances. Besides, the Indian general elections are still some years away and Indian public will have other issues to contend with in the meantime.

India has lived with insurgency and terrorism for decades, and I recall when Kashmiri Pandits were killed and then driven out of Kashmir by Mujahideen in 1989-1990, nobody in India batted an eye. As many Indians told Americans after the 9/11 attack, "As you sow, so shall you reap".

Unfortunately, it is not the other shoe but another set of feet this time.

'Focus On A Dialogue'