Chasing a target of 399 runs, Australia were bowled out for 261 on the rain-affected fifth day. 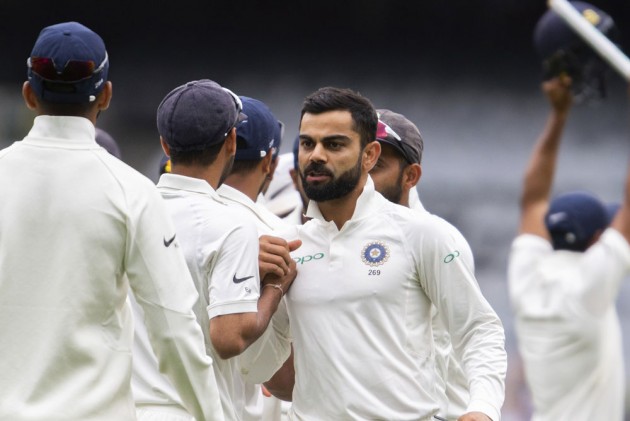 India beat Australia by 137 runs to win the third Test and retain the Border-Gavaskar Trophy at the Melbourne Cricket Ground (MCG) on Sunday.

The visitors thus secured an unbeatable 2-1 lead in the four-match Border-Gavaskar Trophy series.

Chasing a target of 399 runs, Australia were bowled out for 261 on the rain-affected fifth day.

Here's what the skippers Virat Kohli and Tim Paine and the man of the match Jasprit Bumrah said after the match:

Kohli: "We are not going to stop here. This (win) will give us more confidence and we will play more positively in Sydney. I think we have been really smart in all the departments in the two matches that we have won. That is the reason we have at least retained the trophy but the job is not done yet. It's not finished at all.

"The credit goes to our fast bowlers, especially Bumrah, he has been brilliant for us. He (Bumrah) was unlucky not to get wickets in Perth. The way he bowled, it was almost criminal that he didn't reap the rewards. The team management calmed him down and wickets for him came in bunches in this Test and he won us the Test match here at the MCG.

"Mayank Agarwal was amazing, he showed great character. His composure was excellent. (Cheteshwar) Pujara was brilliant too. No one is looking for a personal milestone. (Hanuma) Vihari played out the first 15 overs against the new ball which was pretty helpful too. With Rohit (Sharma) making runs at number 6, it played out extremely well for us.

"Nothing is to going to distract us from wanting us to winning that last Test match. We have never been in this position and now is the time to express ourselves even more."

Paine: "It's a bit disappointing. I thought we took a big stride forward in Perth but with an inexperienced batting line-up, you are bound to have an innings like we did in the first innings. We are going to learn from it. We are probably playing against the best pace attack in the world right now and our top-6 is pretty inexperienced. We should find positives and move forward. The guys are working really hard and we have a huge challenge ahead of us in Sydney.

"Pat (Cummins) has been superb all series. We all know that he is a quality player. He has been fantastic for us. He turns up every day and rolls his sleeves up. We want more guys to perform like him.

"It's been an interesting year, a difficult one for us. The silver lining is, in the next few months, some world-class players will be available to us again. And in the next few years, we will see some benefits of what has happened but we are under no illusion that we will have to work extremely hard to draw this series and then Sri Lanka is coming which is not going to be easy either."

"I am really happy to contribute to the team's success. My aim is to always focus on consistency. We train very hard and we are used to bowling a lot of overs in Ranji Cricket, so the body is doing well. My focus is on the next Test now. It was always a dream to play Test cricket and I was really happy when I debuted in South Africa. I started learning slowly, in England it was a different experience. Coming to Australia has been a different experience as well. The start has been good, and hopefully, I will keep getting better."

The fourth and final Test match will be played at Sydney, starting January 3 (Thursday).