It was the highest ever total that Indian team failed to defend in its ODI history, losing the game by four wickets 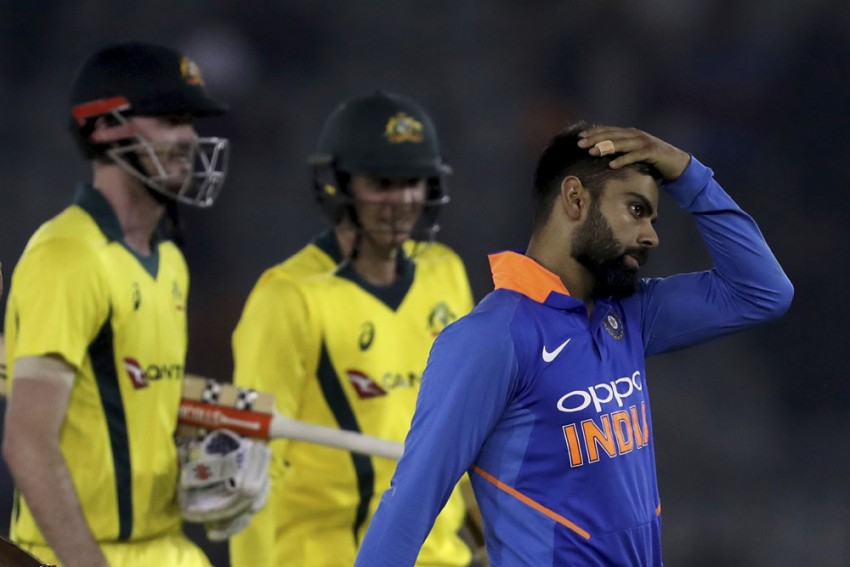 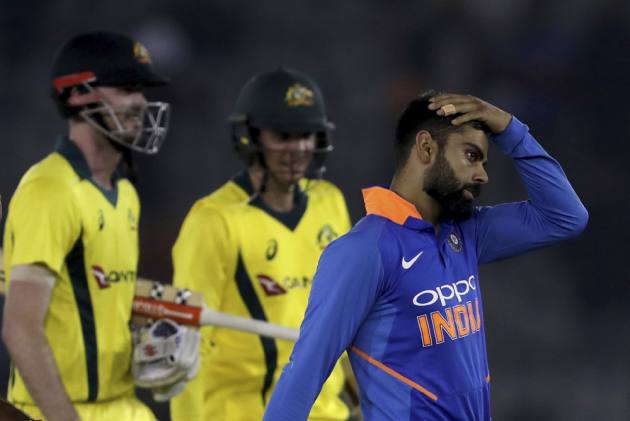 Unheralded Ashton Turner took an experienced Indian attack to the cleaners with some unbelievable hitting, helping Australia chase down a record-breaking target of 359 runs and level the five-match series.

It was the highest ever total that Indian team failed to defend in its ODI history, losing the game by four wickets.

Playing only his second ODI, Turner hit an unbeaten 84 off 43 balls with five boundaries and as many six sixes to help Australia win in only 47.5 overs. Earlier in the day, Shikhar Dhawan fired India to 358 for nine with a sublime 143 off 115 balls.

Batting first, India looked a completely different side with opening duo putting on 193 runs on arguably the flattest track on offer during the ongoing series.

While Dhawan got his 16th hundred in ODIs, vice-captain Rohit (95 off 92 balls) missed out on what could have been a very well-deserved 23rd hundred with Australian bowlers looking like lambs for slaughter.

But a total 358/9 proved too little for India. The series decider will be played in Delhi on Wednesday.

What a chase from the Aussies. Mohali is now their favourite ground, for sure. Four wins in five against India. But there was some late drama. Jasprit Bumrah got the wicket of Alex Carey (21 off 15), caught by Shikhar Dhawan, with Austraia needing just two. FoW-357/6 (47.4 Over). And Ashton Turner took a double off the fifth ball to give Australia a four-w3icket win. He remained unbeaten on 84 off 43 balls, with five fours and six sixes. Series levelled at 2-2.

Playing his second match for Australia, Ashton Turner was taking apart the famed Indian bowling attack. And helping his cause was the many drop catches, including a straight one by Shikhar Dhawan. Bhuvneshwar was hit for 18 runs in the 47th over as the equation was reduced to 8 off 18. He was unlucky though. Kedar Jadhav dropped Turner off the first ball, then Shikhar Dhawan floored a straight one off the fourth. Turner (81 off 41) has done it! 54 runs have come off the last 3 overs.

Ashton Turner making Indian bowlers for poor deliveries. Back to back boundaries. Series of full tosses. Maiden fifty with a four in 33 balls. He just hit Bhuvneshwar Kumar for a six, off the third ball of 45th over. Then another six off the last ball. 20 runs from the over. Aussies were 317/5. 42 needed from 30. Partnership worth 46 off 23.

Maiden ODI ton for Peter Handscomb. Three dot balls from Bhuvneshwar Kumar, then a single off the fifth ball of the 35th over. He took 92 balls. He has hit six fours and three sixes. Three runs from the over, and Aussies were 216/3.

Then, immediately after the drinks, Jasprit Bumrah provided India with the breakthrough. He had Usman Khawaja (91 off 99) caught by a Kuldeep Yadav at fine leg. FoW - 204/3 (33.1 Over). Glenn Maxwell joined Peter Handscomb. And he opened with a sizzling four. Bumrah responded with a brute of a delivery, just missed the bat. Another four, and nine runs from the over. After 34 overs, Aussies were 213/3 after 34 overs. Aussies need another 146 runs. Btw, the 192-run stand between Khawaja and Handscomb was the highest for the third wicket against India in India.

Aussies have started attacking. Usman Khawaja and Peter Handscomb have added 192 runs in 177 balls as teams take drinks in Mohali. After 33 overs, Australia were 204/2. They need 155 runs from 17 overs. Game on.

After 31 overs, Australia were 177/2. Usman Khawaja (86 off 93) and Peter Handscomb (80 off 81) have added 168 runs in 165 balls. Khawaja just survived a umpire's call. Review well taken. Kedar Jadhav and his Indian teammates thought, they have got the wicket. But clearly missing the leg stump. That happened off the third ball of the 31st over. Aussies were 180/2 after 31 overs. They still need another 179 runs, at just under 10 an over.

4th ODI fifty for Peter Handscomb (55 off 60). The right-handed batsman reached the mini-landmark with a single off the last ball of the 22nd over, bowled by Yuzvendra Chahal. He took 55 balls. He and Usman Khawaja (66 off 66) have added 122 runs in 117 balls for the third wicket, with 37 of those coming in the last five overs. Australia were 134/2 after 23 overs. They still need another 225 runs.

Usman Khawaja carrying his form. Reached his 7th ODI fifty in 52 balls, with a single off the last ball of 18th over, bowled by Vijay Shankar. Australia were 105/2 after 19 overs, still needing 254 runs to level the series.

A 44-run stand between Usman Khawaja and Peter Handscomb has calmed the frayed nerves in Aussie camp. Khawaja (29 off 32) and Handscomb (19 off 28) looked in control. Australia were 56/2 after 12 overs.

Then, Jasprit Bumrah got Shaun Marsh (6 off 10) walking. Perfect yorker. FoW - 2-12 (3.3 over). Peter Handscomb joined Usman Khawaja in the centre. Australia were 17/2 after four overs.

What a start from Bhuvneshwar Kumar. Playing his first match in the series, the pacer clean bowled Aussie captain Aaron Finch (0 off 2) with a beauty. FoW-3/1 (0.4 Over). Shaun Marsh joined Usman Khawaja in the centre. Australia were 6/1 after two overs.

A flurry of wickets towards the end of the innings, but India managed a huge total of 358/9. In frenetic last five overs, India lost five wickets but Jasprit Bumrah ended the innings with a massive six from Jasprit Bumrah to send the Indian camp to euphoria. Probably his best so far. Pat Cummins took two wickets in that last over.

KL Rahul's stay in the centre over. Caught behind off Adam Zampa. The Aussie spinner became the second quickest Aussie opener to reach the fifty-wicket mark, behind Shane Warne (25). Zampa's playing his 38th match. Rahul made 26 off 31, with one four. FoW - 296/4 (42.6 Over). Kedar Jadhav joined Rishabh Pant. After 44th over, India were 301/4.

16th ODI hundred for Shikhar Dhawan. The left-handed opener reached the mark with a four off the last ball of the 32nd over, bowled by Adam Zampa. He took 97 balls, with the help of 12 fours and a six. India were 201/1 after 32 overs.

Rohit Sharma (95 off 92) missed out on a deserved hundred. Caught at deep by Peter Handscomb, off the bowling of Jhye Richardson. FoW - 193/1 (30.6 Over). KL Rahul joined Shikhar Dhawan in the middle.

Rohit Sharma hit the first six of the match as India increased the scoring rate. His opening partner Shikhar Dhawan was in red hot form, having already hit eight fours in his 42 off 34 balls. Rohit was on 16 off 26. After the end of the first power-play, India were 58/0.

After three overs, India were 12/0 with Rohit Sharma (2 off 8) and Shikhar Dhawan (10 off 10) unbeaten. They have also gone past Sachin Tendulkar-Virender Sehwag (4387 runs)for most partnership runs for India. But the record still belongs to Tendulkar and Sourav Ganguly (8227).

Virat Kohli won the toss for the second match in a row. And India will bat first. Four changes for India.

India lead the five-match series 2-1, thanks to wins in Hyderabad and Nagpur. But both the outings were fraught with issues, and the most prominent was the top order failure.

Despite the defeat in Ranchi, which gave Australia the chance to level the series, India will start as the favourites when the two teams meet for the fourth time this series at Mohali.

With Mahendra Singh Dhoni rested for the last two matches, all eyes will be on Rishabh Pant.