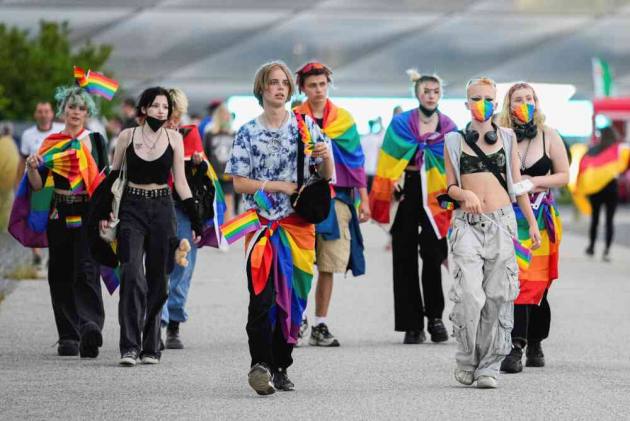 Supporters were met at the exit of the Frottmaning subway station by a host of volunteers from groups including Amnesty International, CSD Germany and S'AG Munich distributing rainbow flags to people attending Germany's final Euro 2020 group game against Hungary  on Wednesday.

Other demonstrators simply turned up to protest UEFA's decision to decline the Munich city council's application to illuminate the stadium in rainbow colors as a protest against what it called Hungary's “homophobic and transphobic legislation.”

UEFA said it had to reject the request because of its political context as a criticism of Hungary. The city referred to a law passed by Hungarian lawmakers last week that made it harder for youths under-18 to access LGBT information by making it illegal to share.

“We're here to protest the oppressive laws of Hungary against members of the LGBTQ community,” demonstrator Julian Krusenberg told The Associated Press.

Hungary fans appeared bemused by the reception and few, if any, stopped to accept flags.

Drag queen Zoey Rachel Pride said she was outside the stadium to demonstrate for human rights.

“Human rights are for all people, regardless of whether you are homosexual, bisexual, transsexual or anything else,” Pride told the AP.

Munich Mayor Dieter Reiter had described UEFA's decision not to allow the rainbow-illuminated stadium as “shameful” and said the city “won't let ourselves be discouraged from sending a clear signal to Hungary and the world.”

Rainbow flags were flying from Munich's spectacular neo-gothic city hall, and there were plans to have a wind turbine near the stadium and the city's Olympic Tower illuminated in rainbow colors, too.

Many Hungarians were unimpressed.

“Politics doesn't have anything to do with sport,” Hungary fan Csaba Töräk said.

One young Hungary supporter, attending the game with his father, said he could see both sides of the argument.

“Like one (side) saying that politics and football shouldn't be united on the field. And I think that's a good point," Mate Melykuti said.

"But it's a good point that it's a human right to be what you are. And I can understand that side, too.” (AP)