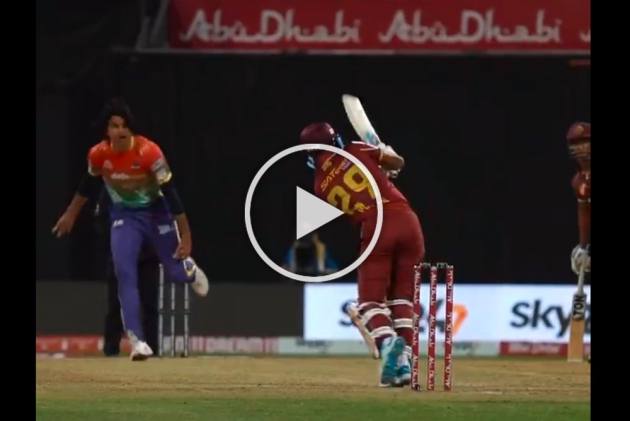 It was raining sixes at the Zayed Cricket Stadium with Pooran smashing 12 maximums and three fours to help his side post the second-highest score of 162 for 4 in the tournament.

The Bangla Tigers chased bravely through their skipper Andre Fletcher, who hit 53 runs off 28 balls with four boundaries and four sixes.

Turn the volume up for this one ð#AbuDhabiT10 | @nicholas_47 pic.twitter.com/n19M3J2F5G

He was well backed by UAE's Chirag Suri, who remained unbeaten on 42, but they fell short of the target by 30 runs, managing 132 for 3 in the stipulated 10 overs.

Sent to bat, the Northern Warriors got off to a quick start picking 17 runs off the first over with opener Waseem Muhammad hitting two sixes off Mohammad Irfan.

In the second over, Mujeeb Ur Rehman had Waseem out for 12 getting him caught at long-on. Pooran walked in and began hitting right away.

Qais Ahmed, who bowled the fourth over, was hit for 23 runs. It included Pooran's three sixes and one boundary.

The sixth over saw Pooran in full flow, hitting Mohammad Irfan for three successive sixes. the West Indian raced to his half-century in the seventh over off 17 balls.

When Garton was re-introduced in the eighth over, Pooran hit him for four successive sixes and two boundaries to take 32 runs off that over.

Chasing the mammoth score of 162, Pakistan pacer Wahab Riaz struck a huge blow when he clean bowled Johnson Charles for a duck with the third ball.

Fabian Allen had Hossain caught by Powell at deep mid-wicket. Suri joined Fletcher in the middle with the Bangla Tigers needing another 113 runs from the last 30 balls.

Wayne Parnell, who took a hat-trick in his last match, bowled the sixth over and gave away just seven runs.

Suri then lifted Allen for two consecutive sixes off the first and second deliveries of the eighth over. He also hit the fourth delivery for another six to take 31 runs off that over.

Emrit was introduced again to bowl the ninth over. Fletcher lifted Emrit over long-on and reached his half-century in 22 balls.

With 49 runs needed off the last six balls, Junaid Siddiqui trapped Fletcher leg before for 33 to end their chase. Suri remained unconquered with a quick 42.