An innovative biomass stove, that could reduce carbon emissions and improve women's health in India, holds promise for a warming world 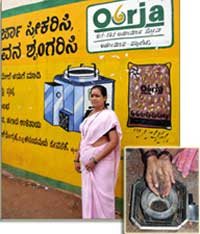 As India's richest families race to outfit their kitchens with the latest European trappings, thousands of village entrepreneurs are discovering how to squeeze profits from a squat Rs 675 stove locally designed to reduce global warming and preserve women's health.

Named "Oorja," meaning energy in Hindi, the stove is part of India's answer to rising concern over India's total emissions – the fourth largest in the world and likely to climb due to surging energy needs and the unveiling of the globe's cheapest car. Unlike many government or NGO-funded projects, this one relies on India's keen entrepreneurs.

Such businesswomen include Lakshmi Babu Pitagi, who began her career by selling tea door to door in the quiet lanes of Karnataka's Sulebhaavi village. Now she is part of a rapidly growing network of women recruited to sell an innovative biomass stove run on fuel pellets made from ground nut and other agricultural residues.

Pitagi seeks to liberate her neighbors from relentless eye-watering fumes of traditional wood-burning stoves, which pose serious health hazards and expand India's carbon footprint. And she expresses confidence that she can make money in the process. Within seven months of launching the product, she convinced a quarter of Sulebhaavi's households to purchase the stove.

"This is a lifelong business," crows Pitagi, 33, who makes a slender commission on the hexagonal 675-rupee metal stoves and the 20-rupee sacks of pellets to keep them burning. As she and other vendors learn the trade, they are also educating their boss, global energy giant BP, about the challenges of rural marketing in a culturally diverse nation that's just beginning to tap into the "base of the pyramid" of consumer power.

Hundreds of millions of Indian villagers still rely on wood-burning stoves, as gas remains a remote luxury in many states. Rural families report that it costs roughly 330 rupees per month, or $8.50, to cook entirely with gas, and many can't save the lump sum required for a gas cylinder. In contrast, BP's vendors pitch the affordability of a weekly supply of two sacks of pellets, which tend to be 50 rupees cheaper than wood purchased in a local market.

On the environmental front, a 2006 report prepared by an independent agency concludes that the stove reduces carbon monoxide by 71 percent and lessens suspended particulate matter by 34 percent. Cooking takes less time because the pellets burn more efficiently than wood, explains H.S. Mukunda, a professor at the Combustion, Gasification and Propulsion Laboratory at the Indian Institute of Science in Bangalore. Biomass use would thus fall from 1.5 to 2 tons per family per year to 0.4 to 0.6 tons per family per year, he says.

The idea of a cleaner stove is hardly novel in India, where indoor air pollution kills nearly 400,000 people each year, according to the World Health Organization.

But in contrast to previous government and philanthropic efforts to simply give away newfangled stoves – programs that have proved largely unsustainable throughout Asia – BP is relying on commercial gusto to spur product acceptance. The company will also test the stove in Vietnam and China later this year.

By giving dealers an incentive to keep supplying the pellets long after they make their first commission on the stove, BP has swerved away from the longtime practice of dumping a stove on consumers and letting them fend for themselves to find fuel.

Pellet delivery trucks roll to Pitagi's door and the company supplies a pamphlet that invokes the Hindu goddess of prosperity and reads, "When you use Oorja, it's like inviting the goddess Lakshmi into your home."

For the energy giant, however, this is yet to become a profitable venture. The company is striving for greater economies of scale and more technical modifications to erase the 225-rupee gap between the stove's current manufacturing cost and retail price. Citing a "long-term commitment," BP officials decline to release figures on the scale of its investment since the project's low-key launch in late 2006.

Still, with a sales goal of one million stoves by the end of 2009 and a break-even target of 2010, company managers are cheered by the market response, with more than 7,000 new consumers each week purchasing an Oorja stove. The company has recruited and trained entrepreneurs in 2,750 villages across Karnataka, Tamil Nadu and Maharashtra states, where they racked up sales of nearly 200,000 stoves.

Many analysts agree that the commercial approach has better odds for success. "Anything that comes to the beneficiaries for free is not taken seriously," says Pradeep Kashyap, vice president of the Rural Marketing Agencies Association of India. Kashyap, who has evaluated previous stove projects, recalls other stoves that ended up as dusty shoe boxes because government programs typically suffer from "no targets, no accountability, and no responsibility."

But in a country with poor roads, ensuring a reliable network for repairs and pellet supply represents a major challenge for BP. Eschewing national advertising, the company has zeroed in on local tactics, including village fairs, roadside demonstrations and mobile vans. Training sessions tap experienced village entrepreneurs to coach novices.

It's a costly exercise. But BP is betting that the learning process will pay off later when it tries to bring other products into rural markets, including low-cost lighting and heating devices. This is the first time the company has mounted a methodical search for grassroots consumers, although it has made other attempts to diversify into alternative energies, including wind power, solar power and jatropha biofuel.

Ironically, it was a 2001 breakthrough in manufacturing cheap computer fans that led to the possibility of creating a low-cost stove for the masses, recounts Mukunda, whose team had been pondering various designs since 1986.

To be sure, Oorja remains out of reach for the poorest of the poor. Women who walk for hours to collect free firewood in India generally cannot afford a one-time payment of 675 rupees. Entrepreneurs like Pitagi generally refuse to supply the stoves on installments, except when it comes to their own relatives. For all the buzz generated by microfinance initiatives in India, no viable plan has emerged.

"We accept the fact that we don't have the means to reach the people at the extreme lower end of the spectrum," says Sunitha Krishnamurthi, general manager for marketing at BP Energy India Pvt. Ltd, the Bangalore-based unit that is spearheading the Oorja project. "Our audience makes more than $2 a day."

One exception is Lakshmibai Hireappa Sampagani, a 60-year old widow in Karnataka's Itagi village. She makes just 30 rupees (76 cents) a day in the fields, but still managed to buy an Oorja stove last October. "It's not like it was a luxury. It was a necessity for me," she insists. Heavy smoke was bothering her eyes, and she couldn't stand the long walk to collect wood, especially during the rainy season.

Wedged between the mud-packed walls of her narrow kitchen, Sampagani voices a common complaint. "When you don't have enough food to eat, where will you get the money for gas?" she asks, a basic question for housewives all over the developing world. Efforts to devise and refine local solutions like Oorja are essential to easing the painful daily struggle for affordable energy and emission control.

Margot Cohen is a journalist based in Bangalore. Rights: © 2008 Yale Center for the Study of Globalization. YaleGlobal Online