Walking is faster. But getting there isn't the point on the Darjeeling 'Toy Train' 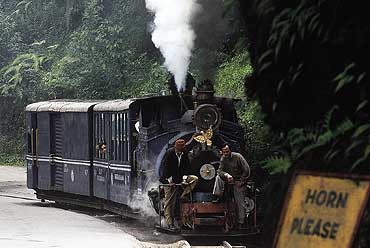 The last train to Darjeeling leaves New Jalpaiguri at nine every morning. It takes an hour to prepare the century-old steam engine for its journey.If you reach the station early,you will find the fireman shovelling coal into the firebox while the driver makes final adjustments with turns of the shiny brass valves.

As the station master rings the bell, the 1 Dn Darjeeling Passenger, hauled by one of India’s few remaining steam engines, pulls away with an asthmatic whistle, clouds of steam and a shower of coal cinders.

The Darjeeling Hill Railway connects hill villages and is the cheapest means of moving village produce to Darjeeling and Siliguri. I stand at the door with my feet planted between baskets of spinach and sacks of cabbage, hoping to catch the breeze and the view. It’s 82 km to Darjeeling, 7,000 feet up in the eastern Himalayas. And it takes eleven hours to get there at a speed not much faster than walking.

The lower slopes—forested with sal and hardwood trees—give way to the first plantations of the famous Darjeeling tea as we near Kurseong. As the engine is replenished with coal and water, passengers spill out of the blue carriages and into the shops on either side of the track.

It is noticeably cooler; Kurseong is 4,500 feet high. The Bengali tourists don woollen jackets, caps and gloves. I wonder if we are about to enter the Darjeeling zone of the Siberian Arctic.

The British arrived in Darjeeling by skulduggery and political manoeuvre, when an East India Company official wrested the hills from the Chogyal of Sikkim in 1835. By the 1950s, the town had fallen into native hands. For the middle class Bengali, it conjured up images of adventure and romance, amidst mist-shrouded pine and fir forests. Satyajit Ray’s classic Kanchenjunga evokes precisely this fantasy. A visit to British-built Darjeeling somehow narrowed the gap between ‘them’ and ‘us’.

As the age of steam engines draws to a close, the Darjeeling Hill Railways’ fan club grows bigger, with chapters in Wales, the US and Canada. In Tindharia town is the almost pre-industrial workshop where the trains, with names like Mountaineer, Green Hills and Meghdoot, are given life-saving surgery to keep them going. All were built between 1892 and 1925 in some long forgotten Glasgow factory. Plans to change the two-feet-wide gauge—possibly the narrowest in the world—to a wider track have been scrapped time and again. With the train having been declared a UN World Heritage object, further attempts to alter its historic character should end.

Our One And Only Shangri-La