"What are you looking at, terrorist bitch?" So said a surly gentleman on a Manhattan-bound subway to my sister ...
Free Speech: The Terror Cycle 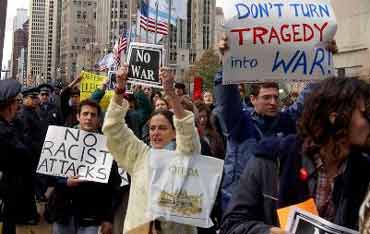 "What are you looking at, terrorist bitch?"

So said a surly gentleman on a Manhattan-bound subway to my sister, who violated the rules of overcrowded-island etiquette by stealing a glance at him as he discussed the pros and cons of prejudice.

Ordinarily, racist slurs would make her angry. As it was, having just watched stricken people jump from burning towers to their certain deaths, her eyes filled with tears and she hurried off the train.

A few days later, some thugs visited my cousin's convenience store/gas station, demanding "Where are you people from?" and "Why don't you have a flag up?" My cousin rushed out and bought two gigantic flags and installed them prominently on his house and the store.

At least five South Asian or Middle Eastern Americans have been slain so far and dozens of incidents of harassment, intimidation, and terror have been reported, against Arab-Americans, Muslims, Sikhs, Pakistanis, and other South and West Asians, according to the Asian Pacific American Legal Center.

In Mesa, Arizona, a Sikh man was shot, the suspect shouting "I stand for America all the way" as he was handcuffed. In Los Angeles, an Egyptian American man was shot; a Persian woman was beaten; a gun was shoved into another woman's face; a Spanish-speaking woman was attacked after being told "you foreigners caused all this trouble!"; and another was attacked after being told "America is only for white people."

In San Francisco, a bag of blood was thrown on the doorstep of an immigrant-services center. In Chicago, 300 people waving flags and shouting "USA! USA!" tried to march into a mosque; a firebomb was tossed into an Arab-American community center; and a Morrocan man was attacked with a machete.

In New York, two Pakistanis were killed on Coney Island, a Sikh man was attacked with a baseball bat; two others attacked with a paint-ball gun; another was fired upon with rubber bullets; a taxi driver was pulled out of his cab and beaten; and a Pakistani woman was chased by a car, whose driver threatened to kill her for "destroying my country."

In Cleveland, a Sikh temple was attacked with lit bottles of gasoline. In Tulsa, a Pakistani was beaten by three men. In Dallas, a Pakistani grocer was shot dead; elsewhere in the state shots and firebombs were lobbed at mosques, and a Molotov cocktail was thrown at the Islamic Society building.

There have been others. Most of those who suffer such attacks won't report them. They'll just hide, lay low, wear baseball caps or bindis, as the Indian consul-general advised, and pray they won't be targeted again. As word spreads, their friends and families will do the same. Even my liberal family says I shouldn't take my small boys to the anti-war rallies, because they have brown skin, hair and eyes, and even Muslim names. What if they are targeted? What if someone throws a rock?

Hate crimes hotlines have been set up, and I hope anyone who witnesses or suffers harassment or violence will use them, at least so this wave of violence can be accurately recorded for posterity. For anti-Asian violence organizations, calling these episodes of domestic terror "hate crimes" is tragically understated. For the news media and administration officials, however, it is offensively, dangerously hypocritical. These are not just isolated acts committed by crazed individuals, driven mad by fear and trauma. This wave of violence is a necessary extension of today's warmongering patriotism as defined by our political and media elites.

"There is only one way to begin to deal with people like this," said former Secretary of State Lawrence Eagleburger on CNN, "and that is you have to kill some of them even if they are not immediately directly involved in this thing." "People like this need to feel pain," said National Review editor Rich Lowry in the Washington Post. "This is no time to be precious about locating the exact individuals directly involved in this particular terrorist attack," wrote syndicated columnist Ann Coulter in the New York Daily News.

In other words, indiscriminate revenge, whether on millions of Afghans or against some random brown person on the subway, is what flag-waving patriots must do. "They" need to be punished, commentators say, whoever "they" may be. On a recent episode of PBS's Newshour with Jim Lehrer, even the learned commentators couldn't or wouldn't distinguish between Arabs, Muslims, Afghans (who are not Arabs), fundamentalists, and terrorists. All were just simply "they."

It must be clear to most now. "We" are white. "They" are brown. "They" celebrated--not only in Palestine, as the news media would have us believe, but also in Pakistan, in Nigeria, and elsewhere. This is taken as evidence of their inhumanity. But of course when the jocks in the sports bar in my old neighborhood cheered when Scud missiles hit Iraq years ago, that was good old red-blooded Americanism in action. "They" hate "us" not because of our government's violence and arrogance, but because…well, because "we" are so damn great. Because we are so modern, so advanced, so free, and so rich.

How sad to have to say that all of this is nothing compared to the carnage of the plane attacks, and will be entirely insignificant compared to the massive, sustained slaughter of innocent people that Bush is threatening. Bush's tepid response to the wave of anti-Asian violence at home was to say that the perpetrators should be "ashamed" of themselves. Ashamed? Like how you feel when you steal a cookie from a baby? Like how you feel when you think you might be reproached? Will Bush be "ashamed" when his bombs kill, maim, and further impoverish desperate men, women and children in South and West Asia?

And who is this "we" who hate some unspecified, brown "them" so much and are so willing to forego all the rules and procedures usually insisted upon (for even the most disgusting, murderous American thug) in order to hunt "them" down and kill them…whoever "they" are?

A spate of polls paid for and trumpeted by the warmongering news media in the two weeks following the September 11th attacks told us who. They are us.

Although most news reports on public support for war simply cited "numerous polls" or some such, most referred to the two ongoing, nationally representative polling efforts on this topic--by CBS News/New York Times and by Gallup/CNN/USA Today. Both circumscribed and contained people's potential responses to paint a portrait of a vengeful, angry America, one that will support Bush's war in South Asia and not coincidentally, sell a few newspapers too.

Questions aren't neutral. Their timing and wording reveal the questioners' expectations and assumptions. Gallup's and CBS News's crude questions seem designed to gauge the extent of U.S. rage and vengeance and couldn't have captured a complex, nuanced perspective even if they wanted to.

For instance, on the dark evening of the attacks themselves, CBS pollsters called 402 shell-shocked people and asked them the following incendiary questions. "Are these attacks another Pearl Harbor? they wanted to know. "Should the U.S. retaliate even if innocent people are killed?" About 6 in 10 said yes, 2 said no, and 2 said…well whatever they said went unrecorded.

Then the interviewers went on to goad people into apportioning blame--at least toward the two immediate culprits they could think of. "Should U.S. intelligence have known about the attacks?" they asked. "Could the attacks have been prevented by tighter airport security?" And then, click, interview over. The "findings"--two-thirds of Americans want retaliation even if innocents are killed, as they put it--were trumpeted eagerly. "America Wants Retaliation" their headline proclaimed.

The next day, our intrepid pollsters bothered another 638 people. Do you feel bad? Do you feel angry? Horrified? Or shocked? pollsters asked. Assuming each respondent picked just one answer (a big assumption, unilluminated by CBS's poll website), about 80 percent felt one of those ways.

So how did the other 20 percent feel? Nobody asked. (How about scared? How about sad? That's how I felt.)

About 25 percent said they were angry, and despite the fact that pollsters had no idea how many people would have said they were angry the previous day (it's within the realm of possibility that some portion of Americans are always angry)--CBS announced that "Americans are no longer shocked, they're angry." Seventy-one percent wanted retaliation, they found.

Over the next two days--Thursday September 13 and Friday September 14--our pollsters again took to the phones. They demanded answers from 959 people. They asked essentially the same questions, except this time they added a new one.

"Are Arab Americans more sympathetic to terrorists?" they wanted to know.

(But this is a meaningless question, by itself. Which terrorists? Irish ones? Sympathetic how? Like they know how to pronounce their names? Like they know where they are coming from? Like they'd give them loads of cash and their passport? What?)

The Gallup Organization, "one of the world's leading management consulting firms" according to their website, in partnership with USA Today and CNN have also been conducting ongoing much-cited national polling. They asked much the same questions that CBS did, with much the same results, but they also wanted to know how many people attended memorial services, cried, displayed a flag, or prayed in response to the attacks.

Since my whole argument here is that these polls are worse than useless, it may not be fair to note one underreported finding. When asked whether the U.S. should act immediately against known terrorists or only against those responsible, over sixty percent said that only the proven perpetrators should be targeted.

Doesn't that just blow all the other findings about wanting war, indiscriminate revenge, and all the rest of it out of the water?

Gallup's and CBS News' numbers frighten me. But I'm going to try not to make much of them either way. As a statistician friend of mine who used to work at Harris Polls says, "polling companies burn through hundreds if not thousands of phone numbers to get the sample sizes they need. But there is probably good reason to think people who refuse to participate, who aren't home, who don't answer the phone, who don't have phones would respond quite differently from those people who do participate."

"In other words the samples are not truly representative of the American public," he says.

(Sonia Shah is a writer and editor of "Dragon Ladies: Asian-American Feminists Breathe Fire" (South End Press, 1997. The above appears by arrangement with Zmag).