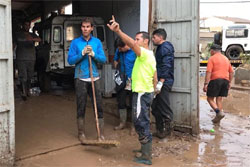 The week before Christmas, tennis great Rafael Nadal donated one million euros ($1.1 million) to the victims of flash floods that hit Mallorca, Spain in October.

"It happened in the village just next to us, just five or six kilometres away from here," the 17-time Grand Slam champion told CNN. "It was a tough day."

Most of the deaths occured in the town of Sant Llorenc des Cardassar, near Manacor.

"I really lived that tragedy, from very close," Nadal said. "Was very sad for all the people that lost the materials, but especially, the lives that can't come back."

Nadal joined the clean-up effort in Sant Llorenc, which was later declared a disaster zone after the Spanish prime minister, Pedro Sanchez, visited the island.

The "King of Clay" opened up his academy to victims of the flash floods.

Hailing Nadal's humanitarian work, the local government said in a statement: "We know about his affection and humanity, which is as great as his talent and his results and he has shown that both on and off the court."

In a video published by the local government, mayor Mateu Puigros stressed that Nadal donated the money despite being unable to take part in a charity exhibition match aimed at helping people who were affected by the disaster.

Nadal last played an official match in September, when his US Open title defense ended with a knee injury in the semifinals against Juan Martin Del Potro.

He missed the year-end ATP World Tour Finals in London after surgery on his ankle.

Yogeshwar Dutt Hits Out At Naseeruddin Shah, Says 'Don't Call Yourself A Patriot'