You can take a Bengali out of Calcutta but you can't take Kolkata out of a Bengali. Pandal-hopping in Delhi during Puja, our senior correspondent hurriedly shared some of his observations, before rushing off for the day's peregrinations 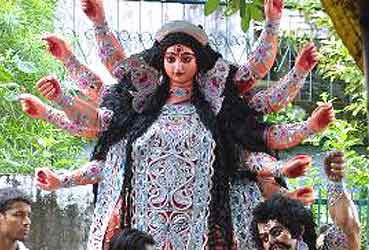 A strange behavioural pattern of the devotees met the discerning eye as I made my way to the sanctum sanctorum of the Delhi Durga Puja Samiti at Shamnath Marg. A desire to see the Capital's oldest 'puja' had made me undertake the journey from my humble abode in south Delhi to the venue near the prestigious Indraprastha College in the north, and realisation soon dawned that the 'puja' was unique in more ways than I had thought.

The sight before me was truly puzzling. A quick bow of heads before Durga's idol as if fulfilling a ritual, a quick about turn and a rush in the opposite direction. Unable to decipher the reason for this 'superficial devotion', I decided to fall in line with the crowd. The sight that unfolded made me break into a wry smile. The serpentine queue in front of the food stall made it difficult for me to see its ware, but the appealing aroma wafting through the air revealed its identity - biryani!

One of the organisers had the answer: "People come here on two counts. Ours is the city's oldest 'puja' - started in 1910 - and the lure of the biryani which has now become an indispensable part of our set-up."

Asked to explain the haste to queue up for a plateful, he revealed "The stuff is prepared in limited quantity and exhausts by 9.30 pm. Then one has to settle for the other meat products. He added with a wink "Then the Goddess again holds her sway over her devotees."

Despite feeling quite full, I had to sample the offering, having heard and seen so much of it. A generous helping of the steaming saffron-coloured rice and an even more generous topping of tender mutton pieces. All this for a mere Rs 65.

Yes the Goddess is kind.

If Maha Ashtami is the the most important day of Durga Puja celebrations, Saptami is no less significant. On this day, the Goddess' image is infused with life through a process called Bodhon. Early in the morning, the pran (life) of Durga is put inside the image after it is brought from a near-by river via the medium of a banana plant, called the Kola Bou. Bathed and draped in a new yellow saree, the image reminds one of a newly-wed bride.

The Co-operative Ground Durga Puja Samiti, Chittaranjan Park, boasts of a pandal that is eco-friendly in its splendour. Built entirely of jute procured from West Bengal, efforts have been made to conform to the "Go-Green' theme. The glasses and plates used at the pandal have been made from areca nut bark, giving a miss to plastic and thermocol. Organisers have also grafted grass at the venue and hope some of it will remain.

The pandal, resembling the Sydney Opera House, is made of jute and bamboo. The entrance is in the shape of a palanquin (which is Durga's vehicle this year) while the exit is a huge jute elephant gate (the Goddess leaves on one this year). The organisers are hoping they have produced a winner again.

Association with a Barwari (locality) 'puja' has its advantages as I discovered much to my amusement. A sought-after artist from Kolkata was to perform at an evening's cultural presentation. To avoid chaos, the organisers distributed passes.

Much as I wanted to witness the show, the drudgery of queuing up for a pass prevented me from collecting one early on. Instead, I planned to reach the venue early and exploit my status of a paraar chele (local boy) to gain entry, albeit by the back door. My hopes received a beating as a night before one of the committee members informed me that all passes were exhausted and entry would be strictly on the basis of invitations.

I woke up next morning with a heavy heart, at times cursing myself for inaction. Attending office did not make things easier. The day seemed destined for drudgery. As I drove past the venue towards home, the lilting tunes seemed to stir me out of the state of inactivity. "Come what may, I have to be there," I told myself.

As was expected, there was chaos with the organisers and security having a tough time controlling the prospective gate-crashers. I hung around hoping for the organisers to shower their benevolence on me, but luck eluded me. I began the long walk back home when my neighbour and a member of the organising committee spotted me. My expression said it all. Seizing me by the shoulder he led me to the entrance of the auditorium.

"But sir he does not have a pass," protested a junior. "Pass? He's one of us," growled my benefactor. My paraar chele status had worked. The day turned out to be not so bad after all. Quite delightful, actually.

Being known in local circles does have a flipside too. A sea of happy faces made their way out of the dining hall, content at having their share of Ma's bhog. Suddenly one of the volunteers spoke out pointing to a lady of venerable age "Aunty you refused to pay when we came to you for raising funds. But now you're here for bhog."

Red in the face, the lady made a hasty exit. The youngster bore a triumphant look, having avenged his 'humiliation'.