No Profit, Only Loss

So Sonia Gandhi made a virtue out of necessity and has, as the Congress website have us believe, taken the wind out of the BJP sails, but surely the issue goes far beyond cynical political one-upmanship?
Facebook Twitter Google + Linkedin Whatsapp
Follow Outlook India On 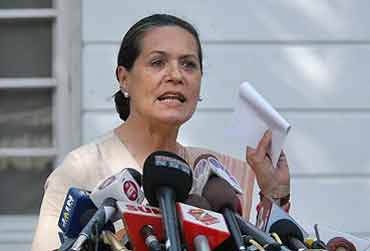 It is like being stuck in a bad Mumbai fllm with a tired, unimaginative script hammed away to glory. Unfortunately, in this one, even the actors don't change. It isn't as if they have just lost the plot, they seem to be lost in the plot itself, which revolves around the fine art of first arrogantly indulging in cynical and myopic politics that effortlessly culminates in painting oneself into a corner and then, in sheer panic, desperately trying to project the painful process of trying to extricate oneself as a heroic, nay, saintly virtue of self-less sacrifice in the service of the nation.

That, in short, is the story of the Congress party, particularly in its UPA avatar. And its handling of events leading upto the disqualification of Jaya Bachchan under the Parliament (Prevention of Disqualification) Act 1959 on grounds of holding an 'office of profit' was (surprise surprise) a sad and miserable rerun of the same sequence of events, of history repeating itself not just as tragedy but as farce. One did not really have to be an Einstein to know that the same standard would be sought to be applied to Sonia Gandhi or Somnath Chatterjee, among many others, holding the amorphously defined 'office of profit'.

But the possibility of being hoist by one's own petard was arrogantly and nonchalantly dismissed out of hand. The opposition too had seemed to be exhausted perhaps from the very idea of yet another communally divisive yatra, but as the campaign with similar complaints to the President against Sonia Gandhi gathered momentum, the government appears to have panicked. And panicked big time. On Wednesday, the Indian Express broke the story in its front-paged story on how the UPA was proposing to being out an ordinance, with the express purpose of ensuring that the 'office of profit' charge would not be applicable to Sonia Gandhi.

The confirmation was available by late Wednesday evening when the Chairman of the Rajya Sabha, Bhairon Singh Shekhawat, declared that he had received a request from the government to adjourn the house sine die. It is easy to dismiss 'political morality' as an oxymoron, but constitutional obligations cannot be wished away, nor can this 'fiddling with Parliament' and 'fraud on the Constitution' as Constitutional expert Rajiv Dhavan put it, be simply shrugged off as yet another in the series of cynical improprieties. While a somnolent, issue-less, bankrupt and confused BJP hemorrhaging under the assault from its erstwhile mass-based leaders, suddenly found yet another political lollipop handed over to it in on a platter, and understandably and rightly stepped up the heat, the echoes of support cutting across party lines was not surprising at this blatant attempt to once again brazenly ride roughshod over parliamentary democracy.

Faced with mounting pressure, the response from the panicking Congress was predictable. Even in the most charitable readings of the situation, even if one grants that Sonia Gandhi herself may not have had anything to do with the Jaya Bachchan disqualification or the brainwave of an ordinance that led to the adjournment (perhaps we should believe the conspiracy theory that she was kept in the dark?!), one has to seriously question the political acumen of the 'grand strategists' surrounding her, who, it would appear, excel in breathing life into a moribund opposition. The 'political masterminds' who had earlier been gloating over the disqualification of Jaya Bachchan, do not seem to have even paused to ponder how their too clever by half ploy would be transparent to one and all and would blow to smithereens whatever little is left of the halo of the Sainthood they had bestowed on their leader the last time she tried making a virtue out of a political necessity.

So Sonia Gandhi had to do what worked for her the last time around: adopt the moral high-ground. Frankly, what other option did she have? This was the only option left available to her, and as and by itself, it is only the right thing to have done, as she claims, and relative to the brazen behaviour of those within and without her party, it could appear to be a graceful act, viewed in isolation. But given the context and the cacophony being generated by her assorted minions seeking to project her as the Great Renunciator, it is difficult to see it as anything other than yet another resignation in the grand tradition of Jagdish Tytler, Natwar Singh, Buta Singh et al, yet again packaged as a self-less sacrifice in the service of the nation. Much water has flown down the Yamuna since circa 2004. Compounding the whole crisis are the controversies surrounding the Congress-appointed UP governor and the Election Commissioner Navin Chawla. The saint had been tainted (from Volcker and Quattrocchi), and the halo which had been dissipating with the ravages of Jharkhand, Goa and Bihar, has only been hollowed even more with this latest episode. Charges of witch-hunting and vindictiveness against the Bachchans (and never mind the company they keep) in particular would not appear to be baseless anymore.

More importantly, this whole exercise of having made a non-issue to the front-pages that has not only forced the Congress president to resign, whom her brilliant strategists apparently wanted to protect, but also substantially dented the recent assertive initiatives by the prime minister himself. The whole episode also begs the question that if the 'office of profit' is such a technicality, which it would appear to be, that it can easily be by-passed by a mere ordinance, and another election for Sonia Gandhi at the cost of the exchequer, why not simply sort out the definitional confusion? Why adjourn Parliament sine die?

Without going into the merits of the specifics of the Jaya Bachchan case, it is obvious that clarity and transparency is needed on the 1959 law. Is the chairperson of the U.P. Film Development Council a more lucrative 'office of profit' than various others on various boards, councils and corporations and committees? Do they suddenly become offices of no profit if a bunch of people decide that it isn't so? What objective criteria is applied? And what is one to infer from the activities of those four 'cash on camera' Lok Sabha MPs busy dispensing bounties from their MPLAD funds, for example, who were not dismissed but were merely 'reprimanded' and suspended effectively for mere three days? Surely, we expect that our right hon'ble representatives can discuss and debate such anomalies instead of trying to save one individual whose main claim to fame, in addition to her surname, seems to be her 'saintly sacrifice'. Besides, would it be too cynical to argue that the very office of an MP is seen as an office of profit?

With Sonia Gandhi's resignation, the Congress party, true to its brazen ways, may like to think that it has taken the wind out of the BJP's sails, which it certainly has, but those suddenly in the dock now are not only Amar Singh, but also the speaker Somnath Chatterjee and many other stalwarts of the ruling alliance as well. Effectively, apart from having ensured the resignation of its own MPs, and mini elections at tax-payers' expense, and causing political turbulence in various state legislatures, it has only left more than a substantial and stinky egg on the face of the party, its president and the prime minister - and in these days of the deadly H591, it could go far beyond embarrassment, when all that was required to be done when the Jaya Bachchan case hung fire for many months was a simple discussion in the relevant parliamentary committee.

The Congress should thank its stars that its main opposition comes from those who are not only equally morally and ideologically bankrupt, but also deeply divided. For now, while the comrades mull how best to deal with Mamata dee's fresh ammo-charged attack, while the Congress seeing short-term electoral gain brazenly goes to town on the theme of sacrifice and how it has raised the bar in upholding political morality, and while the BJP goes into yet another funk and sulks, it is time to underline that the real loser in this whole sorry episode has only been parliamentary democracy.