The best known face of the local people's struggle for water preservation in Kerala's northern district of Palakkad. 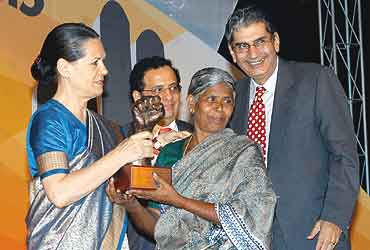 She is the best known face of the local people's struggle for water preservation in Kerala's northern district of Palakkad. She has been in the vanguard of the agitation, spearheaded mainly by the tribal community, against a soft drink major, Coca Cola, at Plachimada, 30 km from Palakkad town.

The genesis of the anti-Coke movement in Plachimada had its origin in dwindling levels of well-water and more manifestly, the change in the water colour. Those were the first signs of water contamination. Backed by NGOs, she launched a satyagraha against the soft drink major on April 22, 2002. The satyagraha is still on and perhaps might end up as one of the longest spells of a Gandhian mode of agitation, post-Independence.

The local people's initiative to protect their natural resources owes much to her leadership. Hailing from the "IRALAVAR" tribe, this 56-year-old grandmother even now works as a farmhand. But her activism often results in lost working days. She often sleeps in the pandal. She does not belong to any political party. She resents party-ism that has played havoc with grassroots development. Earnestness and sincerity are her hallmark. She was married at the age of 15 but her husband died prematurely. She has had no formal schooling.

She lives with her children and grandchildren near the factory on a small piece of land. Her children work in turns to keep the family hearth burning. Often they have to skip work to keep the agitation alive.

The protracted struggle is now before the Supreme Court. All this has only steeled her resolve to continue what she believes is a genuine agitation for people's basic right to healthy living. The struggle has brought her out of the confines of a tribal hamlet. She has travelled or been taken to different parts of the country on the campaign trail. She is consulted by greens activists, researchers and social activists from both within the country and outside. But Maylilamma is, even now, the simple, unassuming local village woman.