Kuldeep Yadav, who broke the Windies spine with figures of 3/13 won the man of the match award. India lead the three-match series 1-0. 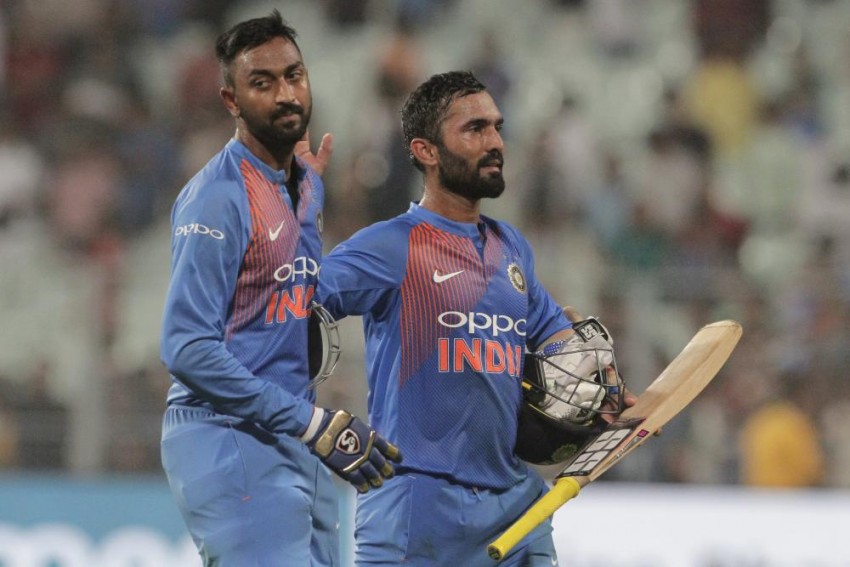 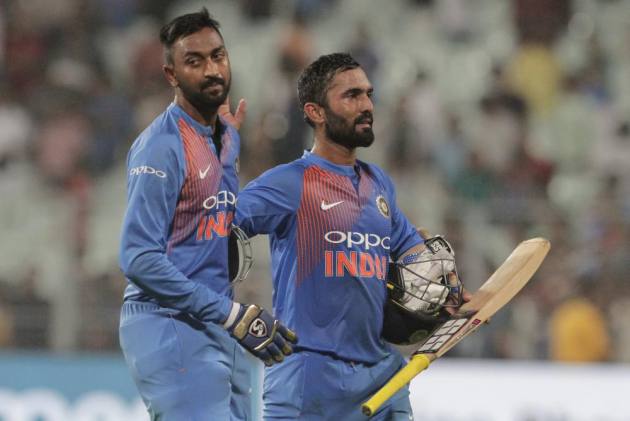 India braved a rare top-order batting collapse while chasing a below-par target of 110 runs, but Dinesh Karthik and debutant Krunal Pandya posted a 27-run stand for the 6th wicket to beat the World Champions Windies by five wickets with 13 balls to spare at Eden Gardens on Sunday.

The Windies bowled well, especially skipper Carlos Brathwaite but their total was too small to defend. Sent into bat, West Indies were restricted to 109 for eight and India chased down the target of 110 in 17.5 overs with Karthik and Pandya scoring unbeaten 31 and 21 runs respectively.

Kuldeep Yadav, who broke the Windies spine with figures of 3/13 won the man of the match award. India lead the three-match series 1-0.

The second match is scheduled to be played at Lucknow on Tuesday (November 6).

Keemo Paul on as India need ten runs from the last three overs. Two singles, then a double as Krunal Pandya played towards fine leg. Another four for the debutant, beating the fielder at deep square leg. Then, a double to extra cover for a nervy win.

Krunal Pandya hit his second four of the match, a delicate dab behind the wicket.

11 crucial runs for India as Krunal Pandya hit the last ball of Fabian Allen's first over. There were three singles and two doubles from the previous five balls.

Manish Pandey departed after a long vigil with Dinesh Karthik. Caught and bowled for Khary Pierre.

Three runs and a wicket from the over. Debutant Krunal Pandya is the new man for India.

Carlos Brathwaite conceded seven runs from his last over for figures of 4-1-11-2.

After a good start to the over, a single from the first four deliveries, then Manish Pandey hit a four off the fifth ball.

Four runs from the 13th over as India slowly inched closer to the target. Two singles and a double. Khary Pierre's figures so far: 2-0-7-0.

After a long time, a good over for India. Kieron Pollard leaked 12 runs from his first over. Dinesh Karthik hit three fours, off the first, fifth and sixth deliveries.

Another brilliant over from the Windies captain. Two singles and there was almost a run out off the last ball.

Dinesh Karthik hit the innings' first six, top-edge off the fifth ball. Seven runs from the over and India crossed the half-century mark.

A wicket maiden from the Windies captain Carlos Brathwaite. India in trouble. Lokesh Rahul failed to control his shot, and Darren Bravo took the catch at deep square leg.

Brathwaite's figures so far: 2-1-2-2. Dinesh Karthik is the new man for India.

Good over for India. 10 runs from Keemo Paul's third over. Three singles off the first three balls, then a wide. Manish Pandey hit the fourth legal delivery for a four. Two more singles followed.

Rishasb Pant wasted another opportunity. He lasted only four balls and got out going for the glory. A top-edge, caught by Darren Bravo. Wicket to the Windies captain.

Three runs and a wicket from the over. Manish Pandey is the new man for India.

10 runs from the over Oshane Thomas' third over with Lokesh Rahul hitting successive fours off the last two balls.

One quite period of play. Lokesh Rahul faced all six delivers from Keemo Paul, scoring six runs, which included a four off the second ball.

Six runs and a wicket from the over. Rishabh Pant is the new man for India.

Four runs from the second over, bowled by Keemo Paul. India need another 99 runs to win. Shikhar Dhawan faced the first four balls, scoring a double and a single off the second and fourth deliveries. Lokesh Rahul scored a single off the last ball after blocking the fifth.

Rohit Sharma faced the first delivery from Oshane Thomas and took a double, then a dot ball. The India captain hit the third ball for a four, over the cover fielder. A dot and a wide, then the big wicket. Caught behind. Umpire was unmoved when the Windies shouted for the wicket, but it was reversed after the review.

Lokesh Rahul is the new man for India.

This is Windies' lowest total against India in T20Is. And the windies, known for their six-hitting abilities, only managed one.

Spinner Kuldeep Yadav led the Indian bowlers' fine show with three wickets to restrict West Indies to 109 for eight. Electing to field on a dew-laden Eden Gardens, India responded well with the pacers giving them a fine start after Umesh Yadav dismissed Denesh Ramdin in the third over.

Debutant Khaleel Ahmed (1/16) and Jasprit Bumrah (1/27) ensured that the Windies run-rate dried up before the spin duo of Krunal Pandya (1/15) and Kuldeep made merry. Kuldeep (3/13) also completed 100 wickets in T20 cricket.

Debutant Krunal finished with excellent figures of 1/14 bowling his four overs at a stretch.

Six runs from the last over as Jasprit Bumrah showed his class once again. A single off the first ball, to Khary Pierre. Then two dot balls. Keemo Paul took a single off the fourth ball, then a dot ball. Pierre hit a four to end the over and innings with a four.

Paul and Pierre added 22 runs from 12 balls as the Windies got to a fighting total after a disastrous start. In the last four overs, they scored 39 runs losing one wicket.

16 from the penultimate over. Umesh Yadav's figures read 4-0-36-1. Keemo Paul took a single off the first ball, then Khary Pierre hit the second ball for a four. It was followed by a leg bye, then a couple. Paul then hit back-to-back fours.

And with that, the Windies have crossed the 100-run mark.

Khaleel Ahmed got his maiden T20I wicket off the last ball of his spell today. Umesh Yadav took the catch.

Six runs and a wicket from the over. Khaleel's figures: 4-1-16-1. Another debutant Khary Pierre is the new man for the Windies.

Good over for the Windies with Fabian Allen adding crucial runs to their total. The over started with a four. It was followed by a couple, then a three. Two more singles from the last two balls.  Jasprit Bumrah's figures: 3-0-21-1.

Umesh Yadav returned for his third over. Conceded seven runs. The over started with a four as Fabian Allen getting a four.

Kuldeep Yadav got his third of the day. Trapped the Windies captain in front with his fifth ball.

The very next ball, India wasted a review, for another LBW against the new man Keemo Paul.

Krunal Pandya completed his spell for figures of 4-0-15-1. He conceded two runs from his last over.

Kuldeep Yadav got the wicket of Rovman Powell again. Caught behind off the third ball of the over. A contentious decision from the umpire. Could have easily overturned the decision.

Two runs and a wicket from the over. Fabian Allen is the new man.

One tidy over from Krunal Pandya. Only a single off the last ball. Rovman Powell failed to score from the first balls. but managed to take a single.

Kuldeep Yadav got his first wicket, thanks to a good catch from Shikhar Dhawan at long-on.

Four runs and a wicket from the over. The Windies captain Carlos Brathwaite is the new man. fo

Krunal Pandya got his first wicket. Dismissed Kieran Pollard, caught by Manish Pandey at long on.

Two runs from the over. Rovman Powell is the new man.

Good start from Kuldeep Yadav. The chinaman bowler leaked only three runs, all singles to continue to frustrate the Windies.

Debutant Krunal Pandya conceded 10 runs from his first over. Kieran Pollard hit the third delivery for a six over long-on.

Jasprit Bumrah returned for second over and leaked only three runs even as Kieran Pollard and Darren Bravo look to start afresh. In the previous over, Khaleel Ahmed conceded only two runs.

Jasprit Bumrah struck in his first over. Shimron Hetmyer. The in-form Windies captain got a massive top edge. Dinesh Karthik completed the catch.

Seven runs and a wicket from the over. Darren Bravo is the new man.

Shai Hope, who's looking in great touch, departed after making 14 runs thanks to a run out. Comedy of errors. Both the Windies batsmen were caught running towards the same end.

Kieron Pollard in the new man for the windies.

Maiden over for Khaleel.

Umesh Yadav got the wicket of Denesh Ramdin, off the second ball.

New man Shimron Hetmyer hit the second ball he faced for a four. Six runs and a wicket from the over.

Another eight runs. Khaleel Ahmed started his spell with control and precision but ended up leaking eight runs with Shai Hope hitting the last ball for a four.

Umesh Yadav opened the proceedings. A dot ball, then the first boundary of the day, thanks to debutant Krunal Pandya's poor handling of the ball after it was middled by Shain Hope. A couple of dot balls, then a four. A dot to end the eight-run over.

Rohit Sharma won the toss, and India will bowl first.

A host of debutants in the match. Krunal Pandya is making his India debut, while Khaleel Ahmed is playing his first T20I match.

Windies handed T20I debuts to Oshane Thomas, Fabian Allen, Khari Pierre. Thomas and Allen have featured in the ODIs, but Pierre is getting his first cap today.

Last time India beat the West Indies in the shortest format of the game was way back in 2014, in a World Twenty20 match at Shere Bangla National Stadium, Mirpur. Since then, India have lost another three in four meetings, with one match ending a no result thanks to the rain.

In absence of Virat Kohli, Rohit Sharma is leading the team in the three-match series. Wins in the Test and ODI series will give India confidence. But the Windies are an altogether different team when it comes to T20Is.

They are the reigning World champions. Despite bringing a relatively inexperienced team, the Windies can still challenge the Indians.

Welcome to our live coverage of the first T20I match between India and the West Indies being played at Eden Gardens, Kolkata.