Kerala: All Quiet on Congress' Turf 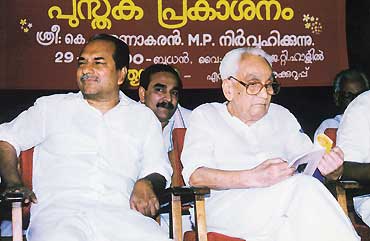 An indulgent electorate overlooked the feud between K Karunakaran and A.K.Antony and gave the Congress and its allies a resounding two-third majority in the new Kerala Legislative Assembly. The Left Democratic Front, which suffered its worst-ever defeat, is an Opposition islet comprising 40 members surrounded by an overwhelming flotilla of 99 United Democratic Front (UDF) legislators. The lone Independent, a Congress rebel, is expected to cast his lot with the ruling coalition.

The LDF is trying to put a poker face on its rout. Chief Minister E.K.Nayanar, enroute to the Governor's abode to hand over his resignation, blamed the Left Front's defeat to a gang-up by communal forces in the state and the shifting of BJP votes to the UDF kitty.

The UDF likes to call it the consolidation of minority votes in its favour. And the BJP? Well, there's a little embarrassment there for UDF leaders, who were quick to claim that BJP votes were decisive but unsolicited. In the end, the big question the LDF has to ponder is how it managed to alienate so many sections of the voting public.

The UDF swept through the southern and central districts of the state, taking many of the LDF's sitting constituencies. The Left coalition managed to hold on to its strongholds in north Kerala such Kasargod, Kannur and parts of Kozhikode. Four of the six LDF ministers, who contested the elections, where defeated. Other bigwigs like the Speaker, Deputy Speaker bit the dust.

The LDF convernor and LDF politburo member V.S.Achuthanandan scraped through in Malampuzha in Palakkad, a red stronghold. Chief Minister hopeful A.K Antony of the Congress beat his CPI rival, after a spirited contest, by a margin of under 7,000 votes from Cherthalla in Alappuzha.

The Congress won 62 of the 88 seats it contested while the CPM won 23 of the 67 seats it stood from. There will be just eight women in the new Assembly, down from 13 in the outgoing one. A total of 35 women contented the polls from both fronts.

All eyes are now on the two Congress leaders who hold the key to a smooth transition to the new order. For now, Karunakaran, who unfurled the banner of revolt in the run-up to the polls, has publicly endorsed Sonia Gandhi's authority in deciding the chief ministerial nominee, which will inevitably fall on Antony. In the factional headcount, Karunkaran has 26 MLAs on his side while Antony commands the loyalty of 28 members. The other factions account for around five legislators who, it is understood, favour Antony. At the moment, peace and goodwill reigns in the interior landscape of the Congress.