Islands In The Sun

A historic Windies win notwithstanding, the stirring moments of the Test series were the confrontations between Lara and the Aussies 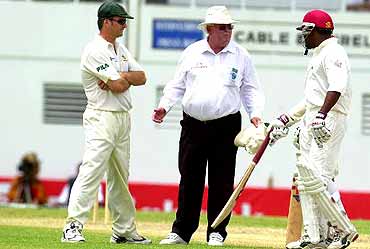 "At last, the Windies tie the Kangaroos," went a cardboard scrawl carried around merrily by a portly, cheerful, middle-aged woman at the Antigua Recreation Ground, St John’s. In recent years, it’s taken a combination of special performances and dead rubbers to beat the Aussies in Test cricket. V.V.S. Laxman’s epic 281 and Harbhajan Singh’s haul of wickets at Kolkata, Mark Butcher’s 173 not out at Leed’s, Michael Vaughan 183 at Sydney.

Another special batting effort has entered that list. In successfully reaching a target of 418 in the fourth Test at St John’s, the West Indies rewrote the record books for the highest fourth-innings run chase in the history of the game. They also broke the jinx of eight consecutive Test defeats to Australia, stretching back to 2000. Victory against a team that’s recognised as the best in the world, whose players have a knack for getting under your skin with their machismo must be sweet.

Perhaps, from the Windies point of view, the most satisfying aspect of this win was that, unlike many other such efforts -- successful and unsuccessful -- in recent years, this wasn’t a one-man act staged by Brian Lara. When it mattered the most, more islanders stepped up to take on the belligerent Aussies, showing maturity and level-headedness that belied their young years.

Like Ramnaresh Sarwan. Just 21 and recently anointed vice-captain, Sarwan had flattered to deceive through the series, doing useful impressions of our own Laxman: ease his way to strokeful 20s and 30s before spooning up a ball that wasn’t there to drive or miscuing a pull. In the second innings at St. Johns, he was peppered with verbals, including one particularly vicious outburst from McGrath, but he stood tall.

Or 20-year-old off-spinner Omari Banks. In just his second Test, Banks’ induction into the big league was nothing short of a baptism by fire. Figures of 3-204 on debut, and 1-62 and 2-153 in his second. At number eight in the batting order, he proved to be the claming influence, and held up one end with the maturity of a veteran.

Or man-of-the-match Chanderpaul, a man of few words but many sparkling strokes, who endured a broken finger to rekindle West Indian hopes after the fall of Lara’s wicket on the third afternoon with a stroke-filled century.

Enduring images from a grinding Test series, which the Aussies ran away with, though the Windies had their moments and chances. Much as St John’s will go down in cricketing lore, the cricket connoisseur will remember this series for one stirring contest that ran through the length of the series and always lived up to expectations: Brian Lara versus Australia.

At the start of the series, ‘Lara versus McGrath’ was billed as an intriguing sub-plot to an otherwise seemingly flat, if not lop-sided, match-up. Lara kept his date, but McGrath missed his for the first two Tests, as he flew back home to be with his wife, Jane, who had been diagnosed with breast cancer. The other Australians stepped in to fill the breach left by McGrath, and the reference is to more than just delivering a red, leather ball from 22 yards.

It became a predictable script. Australia would pile on the runs, then the pressure. The Windies would start to wilt, save for Lara, who seemed to revel at the sight of Aussies bowlers. As the series wore on and old wounds started to reopen, Lara even began to revel at the prospect of provocations from the Aussies. He paid the Aussies back in spades. What started as an engaging fight for cricketing superiority degenerated into an ugly, yet highly compelling, personal scrap by the end of the series.

The animosity between Lara and the Australians goes back a long way. In February 1997, in a series-deciding Test at Perth, Lara accused the Aussies of sledging fellow opening batsman Robert Samuels, and complained to the umpires -- something the Australians obviously don’t take kindly too. In the same match, when Courtney Walsh needed a runner, out strode Lara, which the Australians considered to be provocative. Lara scored a century, the Windies won that Test, and the series 3-2.

Not much has changed since. Lara’s obviously a prized scalp for any team, since he’s the pivot of the Windies batting, one of the very few batsmen in the world with the range of strokes and the attitude to turn around a game. More so for the Australians, against whom he has scored heavily and subjected some players to crude humiliations. Andy Bichel probably remembers the six fours once Lara hit of him in an over in a tour match; some like Hayden might recall their run-ins at Perth; many in the present side wouldn’t have forgotten his prolific run in the 1999 series.

Along the way, tempers have frayed and words have been exchanged. Lara has squared up with McGrath frequently, most famously in the Caribbean in 1999, when he thrust his helmet into the pace bowler’s face. Once again, matters seemed to go out of hand at the Antigua Test. Once again, it was the Australians who caused the provocation, which snowballed during the course of the match, becoming a virtual free-for-all by the fourth evening.

The Windies, in a rare show of verbal aggression, adopted the Australian way, exposing the inherent contradictions in the behaviour of the Aussies. Matthew Hayden made the sign of the cross on reaching his century, yet heaped a verbal barrage on incoming and outgoing batsmen that was anything but brotherly. Steve Waugh crept in from cover to silly mid-off, ostensibly to chat up Lara, yet smiled ruefully and pleaded innocence when approached by umpire Shepherd.

McGrath playfully taunted Sarwan, but when taunted back in return, exploded and accused the fresh-faced Sarwan of something extremely gory and sinister. It seems that, when it comes to sledging, the Australians have a code of conduct, and it upsets them a great deal when opposing teams transgress it.

Still, even if you took away the gamesmanship, the verbal skirmishes and the bad blood between the two sides, it would take away none of the sheen from the best contest of the series. It was riveting stuff, all the way. On one end stood Lara, a class apart, at the top of his game, a resolute mix of defence and strokeplay. At the other end were the Australians, confident, sometimes cocky.

With their new-found preference for a five-man bowling attack, they posed numerous questions to Lara, and he seemed to have answers for most. There was a pattern to each of his innings -- an imposing start, a period of consolidation, another flurry that lay designs on a big one, the breakthrough.

Although Lara ended up on the losing side, he won the battle against the Aussie bowlers. Eight innings, 533 runs, an average of 67, with three fifties and two hundreds. That it comes without any consistent support from his team-mates makes it even more noteworthy.

In Lara’s trials and tribulations lies another tale -- of the shambles West Indian cricket finds itself in. Much as this historic Test win is a huge feel-good factor, it takes more than that to consistently win matches against the best sides. Cricketers and administrators there often use the term "rebuilding" when talking about this current side, and it’s something that is presently only half-done.

The Windies batting looks good, settled and formidable; it’s the bowling, once the patented weapon of the islanders, that’s their undoing. Their bowlers in the series just haven’t looked good enough to dismiss a side twice in the space of five days. To compound matters, their leading bowler, Jermaine Lawson, has been reported for a suspect action.

Meanwhile, cracks are showing in the Australian armour. As usual, they played some sparkling cricket, gunning for results, even making some bold declarations to make a game out of it. Despite the absence of some key personnel, they managed to create wins on dead tracks. And in spite of retaining the Frank Worrell Trophy for Test cricket between the two sides, the powers that run Australian cricket have some introspection to do, perhaps even walk the tightrope again with captaincy selection and address some burning issues.

Like, did they get too cocky for themselves and underestimate their opponents by setting fourth-innings totals way less than what they could have managed? Was there a crying need to make the Windies start chasing 450 on the third evening itself when they could have batted with more circumspection and given themselves a greater margin of safety by posting a target of 500-plus?

Or, where does Waugh go from here? Despite his good batting form, increasingly the feeling is beginning to creep in that this side would rather play under the ebullience of Ponting than the understated aggression of Waugh. Since the transition is imminent, why not go for it now rather than wait for Waugh to hang his boots? And finally, will this bunch of cricketers ever show grace under pressure and in defeat?

Windies Climb The Mountain To Down Aussies