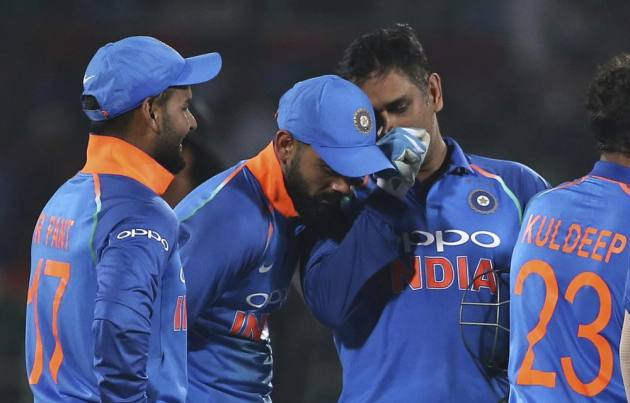 The writings were on the wall. India won the high-scoring opener in Guwahati thanks to Kohli and Rohit's hundreds; then in Vizag, escaped with a tie despite scoring 321. And today, lost the match while chasing a below-par target. In all three matches, Windies looked the better side.

This is the third time that India has lost a chase even with Kohli scoring a hundred, after 123 (111) vs New Zealand at Napier in 2014 and 106 (92) vs Australia at Canberra in 2016.  Kohli also became the first Indian and 10th overall to score three successive hundreds in ODIs, but it could not prevent West Indies from tasting their first win of the tour.

After making a commendable recovery from a shaky start to post 283 for nine on the board, West Indies bowlers rattled the Indian middle and lower middle-order, to snuff out a victory and level the series. The hosts were bundled out for 240 in 47.4 overs.

The fourth match will be played at Mumbai on October 29 (Monday).

India suffered a 43-run defeat. This is the first loss for India at home when Virat Kohli has scored a hundred in a chase.

Marlon Samuels picked the last wicket, that of Jasprit Bumrah to set up their first win of the tour.

Toss was vital, and India won it. But opted to bowl first. At hindsight, it seemed a bad decision. And there's middle-order wobble.

Marlon Samuels, after his failure with the bat, has utilised his bowling arm to great effect. he has got two in three overs, the latest victim being Khaleel Ahmed. Stumped.

India need 47 runs and one wicket at hand.

India lost three wickets for 21 runs in the last five overs, including that of Virat Kohli. The match is as good as over for the hosts.

India need 59 runs in 42 balls. Huge ask. What an implosion.

Two quick wickets as Windies fought back in the match. First, Ashley Nurse got the better of Rishabh Pant, caught behind; then Jason Holder sent back MS Dhoni, caught behind.

But Virat Kohli carried on batting as if nothing's happened at the other end. Completed third hundred of the series in the third match, from 110 balls.

A 47-run stand between skipper Virat Kohli and Ambati Rayudu broken as the youngster dragged on an Obed McCoy delivery.

Rishabh Pant joined Kohli in the centre, and they stitched a 31-run stand in 26 balls. India still need another 118 runs.

Run-a-ball 46-run stand between Virat Kohli and Ambati Rayudu has steadied the Indian innings. Skipper has compiled another 50. In the last five overs, India have added 37 runs and they need another 150 runs from 25 overs.

India lost both the openers, but Virat Kohli is in complete control of the proceedings in Pune. India still need another 184 runs to make it 2-0 in the five-match series.

Then, two Delhi batsmen Shikhar Dhawan and Virat Kohli stitched a half-century stand to thwart the Windies interest. But Dhawan departed in the 18th over, trapped in front by Ashley Nurse.

Ambati Rayudu joined the skipper in the centre.

But skipper Virat Kohli and Shikhar Dhawan steadied the Indian innings. Kohli in the process has become the second highest scorer against the Windies in ODIs, only behind Javed Miandad's 1930. Kohli has 1708+.

Jasprit Bumrah denied Shai Hope a second-consecutive century on his way to a four-wicket haul but the West Indies made a superb recovery after a shaky start to post a respectable 283 for nine. Returning to the team after being rested for the first two matches, Bumrah emerged the most effective bowler, conceding just 35 in his 10 overs.

Hope, who had struck an unbeaten 123 in the Visakhapatnam ODI, played a significant role in reviving the Caribbean innings with his 95-run knock, which came off 113 balls. Towards the end, Nurse and Kemar Roach (15 not out) added crucial 56 runs for the ninth wicket, taking the side close to 300-run mark.

The West Indies batsmen got starts but could not convert them into big knocks and also struggled to form big partnerships.

Windies added crucial 45 runs in the last five overs to set up a good total of 283/9. Shai Hope top scored with 95 off 113 balls, while Ashley Nurse contributed with 40 off 22 balls.

Bhuvneshwar Kumar got his first wicket of the day in the form of the West Indies captain Jason Holder, who was looking in a good touch. Top edged and caught at mid-on by substitute fielder Ravindra Jadeja.

But Shai Hope is carrying on, is on 90. Ashley Nurse is his new partner.

Shai Hope and Jason Holder are in the middle of building a stand as Windies look to weather the Indian attack. They have added 17 runs in the last five overs.

Kuldeep Yadav got two in quick time. MS Dhoni is having a field day today. Just got his third victim. Quick work behind the stumps to stump a dangerous looking Shimron Hetmyer.

Then Rohit Sharma took a stunning catch at first slip to send back Rovman Powell, off the bowling of Kuldeep Yadav.

Skipper Jason Holder is the new man for the visitors.

Windies veteran Marlon Samuels poor form continued. The 37-year-old, who made zero and 13 in the first two matches, departed after making nine as Khaleel get his first scalp of the match.

Shimron Hetmyer is the new man for the Windies.

Second for Jasprit Bumrah. Windies left-handed opener Kieran Powell tried to play an outswinger from the pacer but ended up offering a catch at the cordon, where Rohit Sharma took a tough chance at first slip.

Five balls later, Bumrah got a favourable decision from the umpire. But the Windies challenged the LBW call on new man Marlon Samuels, and he survived.

Jasprit Bumrah removed opener Chandrapaul Hemraj, thanks to a brilliant running catch from Mahendra Singh Dhoni. Hemraj was surprised by a bouncer from Bumrah, which managed to get a top-edge. Dhoni covered some good distance and completed the catch with a full-length dive near square leg boundary.

India captain Virat Kohli won the toss for the third time in the series and opted to bowl first against the West Indies at Pune on Saturday.

India made three changes, with Bhuvneshwar Kumar, Jasprit Bumrah and Khaleel Ahmed coming in. Umesh Yadav, Mohammed Shami and Ravindra Jadeja are out.

There's one change for the Windies. Spinner Fabian Allen makes his debut. He replaced Devendra Bishoo.

India won the first match by eight wickets with 47 balls to spare in Guwahati, then played out a thrilling tie at Visakhapatnam.

In both the matches Kohli scored hundreds to create a host of records, including those of fastest player to hit 60 international tons and 10000 ODI runs.

It's a relatively new ground in the international circuit, having hosted only three ODIs before today. In all three matches, India batted second. India lost the first match to Australia by 72 runs in 2013, then on the next to against England and New Zealand by three and six wickets respectively in 2017. And, it's known as a batting paradise. India famously chased down England's 350 in 2017.

Follow updates from the third ODI match between India and the West Indies, being played at Maharashtra Cricket Association Stadium, Pune.