India Let Pak Off The Hook

The error-prone hosts miss five penalty corners and as many sitters to allow the arch-rivals to escape with a draw, leaving themselves the task of winning the next two matches to square the series. 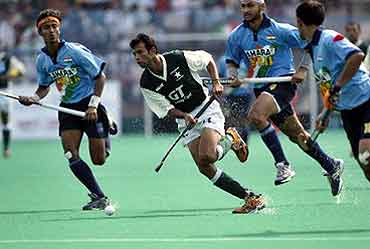 India held Pakistan to a 1-1 draw in Chandigarh today in their must-win match which has now left them with only an opportunity to level the eight-match series.

The Indians needed a win to keep their hopes of claiming the title but the drawn encounter meant that their arch-rivals maintained their 3-1 lead with two matches to go. India must win both of these games to draw the series.

An error-prone India missed five penalty corners and as many sitters to allow Pakistan to escape with a draw.

After Ghazanfar Ali gave Pakistan the lead in the 22nd minute, India fought back and levelled the score through Ignace Tirkey, whose stunning deflection in the 33rd minute found the net.

But thereon, the Indians played some lacklustre hockey to disappoint the large number of fans who had gathered to watch the Asian giants in action.

Pakistan, needing a win to clinch the series, made their intentions clear as early as in the first half itself when they earned a penalty corner following a fine move on the right.

Sohail Abbas, on the threshold of breaking the world record, was cheered when he readied to take the shot but the roar went louder when he hit the shot wide.

That was all the penalty corner king could do as he hardly got any other chance to surge ahead of Paul Litjens' tally of 267 goals.

The Indians, playing without injured captain Dilip Tirkey, were tested by the Pakistanis in the first few minutes but the hosts fought hard to keep them at bay. The Indians got into the attacking mode after the eighth minute when Ariq Aziz glided but just missed to deflect in a cross from the right.

Breaking the shackles, the hosts opened up their game and made incisive moves but failed to break the Pakistani defence.

With the match growing in intensity, Pakistan stunned the crowd with the 22nd minute strike from a penalty corner.

However, it was not their ace drag flicker Abbas who took the strike but Ali, probably keeping in mind Indian goalkeeper Adrian D'Souza's abilities to stop Sohail's rasping flicks.

The one goal deficit spurred India as in the next few minutes they came close to scoring on a number of occasions.

Tirkey's reverse flick from a difficult angle hit the side bar in the 24th minute, three minutes before the same player had muffed up a chance.

Tirkey got into the circle dodging past a couple of Pakistani defenders but only to hit the ball on the rise which went well over the post.

Egged by the capacity crowd, Tushar Khandekar and Vivek Gupta combined well to make a dangerous move down the left but their effort was not enough to neutralise Pakistan's lead. The Indians finally made amends with just two minutes to go for the breather when Tirkey deflected in a sharp pass from a free-hit from outside the 25-yard that sent the home crowd in a frenzy.

The home team proved to be the better side in the second half, dominating the proceedings from the word go but they never managed to cash in on their positional advantage.

India's poor record of penalty corner conversion continued as they failed to score even once from the first five set-pieces they got. They tried everything, from drag-flicks to variation to straight hits, but nothing worked in their favour.

"We should have scored from those penalty corners, but unfortunately we could not. We missed many chances," stand-in captain Viren Rasquinha said after the match.

"But we will fight to our best of abilities to save the series now," the mid-fielder added.

The match was well enjoyed by the local crowd who thronged to the stadium, hosting an Indo-Pak hockey Test for the first time, in large numbers.

India Moving In A Vacuum