In Front Page Article, Washington Post Says Kerala's 'One Of Few Places Where A Communist Can Still Dream'

The article came after President Ram Nath Kovind on Friday lavished praise on Kerala’s achievements in health, education, tourism and IT sectors 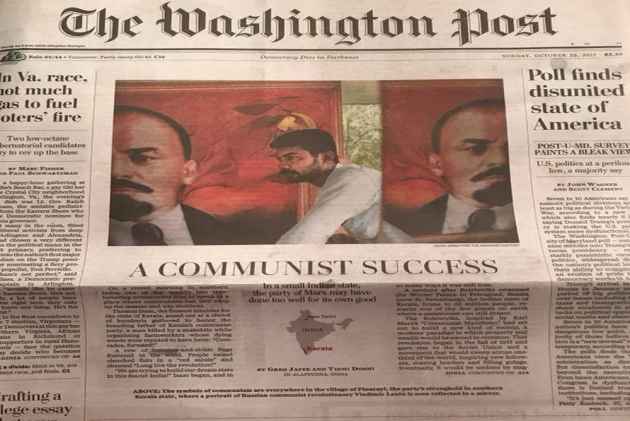 Amid war of words between the Left Democratic Front (LDF) and the BJP over successes and failures of the government in Kerala, The Washington Post on Sunday published a front page article on the southern state, describing it as “one of the few places on earth where a Communist can still dream.”

The article came after President Ram Nath Kovind on Friday lavished praise on Kerala’s achievements in health, education, tourism and IT sectors, and termed the southern state, with its inherent resources and strength, as a potential powerhouse of digital India while launching the state government's ambitious Technocity project near Thiruvananthapuram.

The Washington Post article said: “Instead of being associated with repression or failure, the party (Communist Party) of Marx is widely associated with huge investments in education that have produced a 95 percent literacy rate, the highest in India, and a health-care system where citizens earning only a few dollars a day still qualify for free heart surgery.”

The article, written by Greg Jaffe and Vidhi Doshi, also highlighted an interesting journey, with curious nuggets for those unfamiliar of the CPI(M)’s history in the state. For instance, it talks of how a musical play Neengalennai Communistakki (You Made Me a Communist) played a big role in popularising Left thinking in the 1950s and helped the CPI (M) to its first electoral victory in 1957.

“Unlike communists in China, Latin America or Eastern Europe, party leaders in Kerala never seized factories — the ‘means of production’, in the words of Marx — or banned private property. Instead, they competed in elections with the center-left Indian National Congress party, winning some years and losing others,” the article added.

Interestingly, praises from Kovind and The Washington Post stand in stark contrast to BJP leaders’ attempts to stigmatise Kerala during a state-wide rally against violence attended by national leaders like BJP president Amit Shah and Uttar Pradesh Chief minister Yogi Adityanth who had advised Kerala to take healthcare lessons from his state. The ill-informed advice proved counterproductive as Kerala, with its world-class health indicators, was no comparison to Uttar Pradesh, a BIMARU state where children were dying due to lack of oxygen supply in the Yogi’s constituency.

Putting Kerala finance minister Thomas Isaac at the centre, the article traced the story of the lifelong Communist who began his political journey by picketing his own father’s factory.

“We are trying to build our dream state in this fascist India!” Isaac told the newspaper.

“If you don’t negotiate with these workers, I will be with them on the picket line,” the article quotes him as recalling saying to his father.

On the Indian communism’s future, Isaac said : “The deterioration of capitalism is an inevitability, and it’s happening fast... Humans cannot be so narrow-minded and profit-oriented forever.”