'...that hide the fact that we belong and do not belong in different ways, and that this difference often has to do with our privileges. Why is it that an Indian speaking English is seen as 'hybrid' in some post-colonial circles, but not a Marathi sp 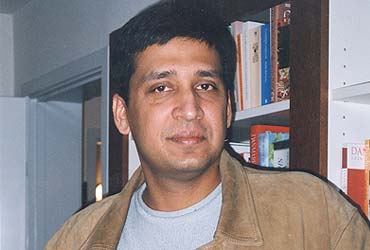 Judging by the glowing reviews in the British press, Tabish Khair’s new novel Filming: A Love Story, is bound to find "admiring readers everywhere". The 41-year-old writer’s third novel begins with the magical early days of cinema in pre-Independence India and ends with the traumas of Partition. His previous book, The Bus Stopped, nominated for an Encore Award, featured vignettes of a motley group of bus travellers in rural Bihar, whose characters ran the gamut from right-wing matriarch to eunuch. Also a celebrated poet, Khair has written several volumes of poetry and a book of criticism. He now teaches English at Aarhus University in Denmark.

From Mrs Mirchandani's Hindutva beliefs in The Bus Stopped to the bloodthirsty kar sevaks in Filming, communalism seems to be a continuing concern?

As you say in Filming, 'What is art but the science of retrieval, of survival, of making sense, of making whole by telling a part of the story.' Is this an authorial manifesto?

Partly, yes. Though manifestos are liable to change with time and context.

In an earlier book, you observed that privileged Indians tend to write the less privileged into existence. How do writers overcome this gap?

I think, at its most basic, by being very aware of the gap, its extent and its nature. Then one has to evolve the required narrative strategies, in terms of language, style, structure etc. And finally, one has to live with the realisation that any attempt to overcome this gap will be only partly successful.

Accessibility to an occidental audience sometimes means explaining Indian culture, as you occasionally do. (For example, with references to "caste-thread" and the translation of "Khul ja sim sim" in the beginning of the book.) Do you think small accommodations like these, specifically, and writing with an audience in mind, in general, compromise the authenticity of the narrative?

Not really, though it is partly a question of extent. Too many explanations spoil the narrative. I think it is a fallacy to claim that one needs not explain to an Indian readership, as if all Indians are Hindustani speakers, or all Hindustani speakers have the same lifestyle. Explanation is part of any narrative; what matters is how it is done and to what purpose. Explaining the Taj Mahal, Gandhiji or Ramayana would be absurd; but 'explaining' the dish of litti or the Hiranyagarbha ceremony is often necessary even for an Indian readership.

What's most difficult about being a writer? Finding a voice, or subject matter, the blank page, or something else altogether?

I would say 'finding a voice.' It takes time, experience and hard work. But in general one should not write unless one is driven to it. It is not a pleasant job.

Bringing together the two concerns of your novel, a few recent Hindi films including Parzania and Black Friday took on contemporary communalism. If you've seen them, how did you find their treatment?

I made a point of not seeing any recent film on the topic when I was writing Filming. I did not want any direct influence. I do hope to catch up now. The most recent film I saw on the theme was Mr and Mrs Iyer, which was brilliant.

Before your novels, you wrote volumes of poetry. Does one form inspire the other?

Not directly. I feel I take a break from one form when I write in another. But a subconscious part of me squirrels away, hoarding bits and pieces which I can use to return to the form I have currently abandoned and perhaps take my writing a bit further than last time.

Perhaps not, though there have been excellent stories and novels from Saadat Hasan Manto, Amrita Pritam, Khushwant Singh and Bhisham Sahni in the past to Githa Hariharan and Mukul Kesavan in recent years. Others too.

Are there any writers who you wish would stop writing about it?

No. But I have been unable to finish reading some.

With Indian writers increasingly being invited to festivals, winning awards, being subject to media scrutiny, and having to attend numerous book launches, is there a danger of becoming sidetracked by pomp and spectacle, and having little time for reflection and actual writing?

Actually, I feel that the attention Indian writers get occasionally is greatly over-rated in India. Even in terms of prizes and advances, Indian writers corner only a very small fraction of the global market. Rushdie and Naipaul are not really 'Indian' in any case, and even they are not among the global bestsellers like Rowlings and Dan Brown: the pomp and spectacle they invite is due to the literary quality of their work. So I am not too worried. Finally, as a writer, you have to decide for yourself whether you want to sip cocktails in five-star bashes, or slog away in the loneliness of your study.

From your experiences in Denmark, would you say there's some hope for integration, for Muslims to co-exist peaceably in Europe?

Well, it cuts both ways. Muslims have been living in many parts of Europe almost as long as Christians, for that matter. For example, there were Muslims in parts of Europe before Denmark became Christian. Now, because of certain ways in which identities have been manipulated and hardened on all sides, it appears to have become an issue: even though most Muslims do live peacefully in Europe. Even during the infamous 'Prophet cartoons' controversy, there was no Muslim violence in Denmark and only one act of violence in Europe by Muslims. On the other hand, many varieties of Islamism are problematic and dangerous: but then they represent an extremist political ideology in line with far rightist extremism among Europeans, for that matter.

You're suspicious of the words "hybrid" and "exile", nonetheless key words in most post-colonial theories and narratives. What are two words or concepts you'd like to replace these with?

I am not suggesting replacement but awareness. It is similar to what you asked about the gap between the narrated and the privileged narrator. Hybrid and exile can become glib words that hide the fact that we belong and do not belong in different ways, and that this difference often has to do with our privileges. For instance, why is it that an Indian speaking English is seen as 'hybrid' in some post-colonial circles, but not a Marathi speaking Tamil? How can someone like me, or Rushdie or Naipaul (who come from even more privileged social or educational backgrounds), be discussed as an 'exile', when you also have semi-literate Indians and Bangladeshis forced to leave their land for work, or refugees from Somalia and Iraq in forced exile?

Is there any book or poem you wish you'd written?

Many. Many. That is why I keep writing.