'He Was Our Inspiration'

The younger generation may not have the understanding to 'get' the greatness of this singer, says the noted music director Khayyam. As a kid, I used to laugh at his singing, agrees Ehsaan, till I grew to understand the power of his voice. 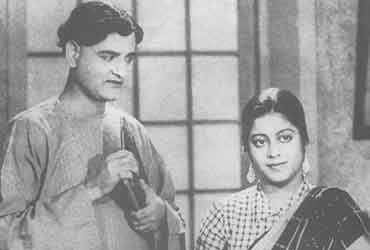 outlookindia.com
-0001-11-30T00:00:00+05:53
He was our inspiration. Words fail me when I try to define his influence on our generation. I particularly identify with him because we both hail from Jalandhar. Everything he did -- acting or singing--it became a definition in itself. Let me talk about his acting first. Every film I saw -- be it Tansen or Devdas or President or anything else -- never once did you feel that this was someone acting. He was so completely natural that the word acting became false when applied to him. He just lived every role. I often used to think he was God's special man. He was definitely blessed because his goodness is legendary.

Ah, his singing! He could sing everything. I am particularly partial to ghazals , so I can say that Saigal's ghazals were unsurpassed, each one a beauty in itself. Offhand I can recall Laakh sahi hum or har ek baat pe (Ghalib, whom he loved). They are beautiful masterpieces. Whatever he sang remains etched in memory individually. His songs don't merge into one another. They are individual masterpieces. He rendered the ghazal so simply that it didn't seem a complicated genre at all when touched by his voice. This simplicity was seen in his acting too. He made everything seem so simple.

What can one say about dukh ke ab din beetat nahin or balam aaye baso more man mein? Or, indeed, the lovely do naina matwale tihaare hum par zulm karein? Take his bhajans: avsar beeto jaat praani tero avsar beeto jaye. Or Suno suno hey Krishan kala. The way he calls out to the Lord, as if from a personal relationship with him-- that was his trademark. He took a song and made it his own and then nobody could could take it away. You'd hear KL Saigal's voice singing it even in your mind! So effective was he as a singer.

I came into the film industry in 1947 which was almost his last year. He died soon after. I had gone to Calcutta but he had already left Calcutta and come to Bombay.

We'd hear hundreds of stories about him. His generosity was really legendary. You'd hear stories of how he helped people and never spoke about it himself. He wanted so little for himself, that was the feeling one got. He was a saintly man, a giver. Doesn't the purity of his voice prove it?

I was merely a struggler when I came in and it was my misfortune that I could not meet him but I don't think I'd have had the nerve to go and meet him, He was everyone's idol. Everyone's inspiration. Everyone went to religiously see his every film. So melodious was he that his can truly be called a Golden voice -- in fact, if there was a better word I'd use that too.

It is so difficult to pick out his songs because everything he sang became a favourite with listeners who'd wait with expectancy for a new Saigal release. And it was difficult to say which was more attractive--the singer or the actor. The kind of love and adulation he got from everyone, remains unsurpassed to this day though the younger generation may not believe how crazy we were about K L Saigal and his voice.

For us, he is unforgettable and we are proud of having had him in our midst. Though I was so junior and Chisti baba [Khayyam's mentor] used to tell me a lot of stories about him. Specifically, about his generosity. K L Saigal was no ordinary man. It was his greatness that he never flaunted himself or his deeds. I enjoyed all his films. Devdas particularly comes to mind. His utter simplicity is something I still remember.

Saigal saab sang in Punjabi too and other languages as well. It was his voice we craved to hear, the language didn't matter. We treated every song of his as a collector's item..

We'd hear how RC Boral and Pankaj Mullick who were the doyens of playback singing in Calcutta, once they heard what Saigal could do, just snatched him up for all their compositions. So much so that Pankaj Mullick who was himself a respected singer in those days stopped singing his own compositions for the privilege of having Kundan Lal Saigal sing them.

In Saigal's voice was the power to command the listener to sit down and listen. When he sings bhajoon main to bhav se sri girdhari, you want to sit on bended knees and pray. His voice had that compulsive quality which no one but no one since has come even close to. The younger generation may not have the understanding to 'get' the greatness of this singer but his greatness remains unaffected. Several singers tried to emulate him but there was and there will remain only one K L Saigal.

One can take random examples like Soja rajkumari, soja -- a lullaby which one often thinks would sound better in female voice, but this one by Saigal is so soft so soothing and so utterly beautiful that you listen with eyes closed each time it plays. What can one say of a man whose singing style was such that it required neither training nor orchestration? He sang with a freedom that no one has emulated. since. As I said, he was our inspiration and that is putting it mildly for want of words.

As told to Lata Khubchandani
For in-depth, objective and more importantly balanced journalism, Click here to subscribe to Outlook Magazine