History might not forgive Dravid for his poor captaincy and unsporting attitude. After all, we have still not forgotten the act of the Chappells, have we? 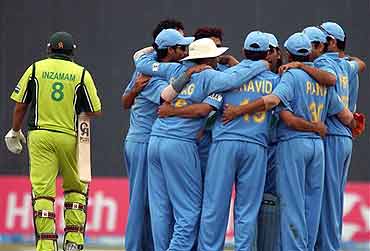 I believe it was very unsporting of the Indian cricket team to successfully appeal against Pakistan captain Inzamam-ul-Haq for obstructing the field and that too at a very crucial stage in Peshawar. It appears that the Indian team was desperate to win the game by hook or by crook, no matter even it came at the expense of the norms of this sport known as the gentleman's game.

I don't blame Suresh Raina for throwing and then appealing. He is new to the game and his enthusiasm is understandable. But the backup by skipper Rahul Dravid is deplorable. He is not new to the sport and should have realised what consequences his decision would have on the bearing of the series (being played under the banner of Friendship) and likewise, on his personality.

A captain needs to stand tall and handle situations, specially when they come in critical stages of the game and I think, Dravid has not only let himself down but also his team. I am dead sure that if Sourav Ganguly had been the captain, the matter would have been defused tactfully and sportingly. But probably, Dravid still needs to go a long way before he can fit properly into Sourav's shoes.

I understand that according to the laws of the game, Inzamam was out and if he does not know the laws, then it is not the fault of the law but Inzamam himself. But my point is that there are several cricketing laws that we don't follow because they are not considered within the spirit of the game.

Batsmen don't run for singles or twos when the ball is deflected off their bodies or bats from throws, batsmen pick the ball and throw it to the close-in fielder or the bowler when it lands close to them. So much so, when Greg Chappell told his brother Trevor to bowl the last ball under-arm, it was also within the laws of the game.

I fear history might not forgive Dravid for his poor captaincy and unsporting attitude. After all, we have still not forgotten the act of the Chappells, have we?

On Inzamam's part, I think it is time that he reads the laws of the game instead of making himself a fool in the prize distribution ceremony by saying he does not understand the law. If a man after playing international cricket for 16 years can't understand the laws, what message he is passing on to the next generation of players present in the dressing room or knocking at the doors of international cricket.

The incident is also an eye opener for the cricket establishment and if it can have refresher and written exams for domestic umpires and match referees, it can start similar tests for first-class cricketers so that when they enter the international arena, they exactly know the laws and its interpretations.

The Peshawar incident is now a test case for Inzamam because I have all the reasons to believe that tempers will be high in the Pakistan camp and the players would not waste any opportunity to give the Indian batsmen a dose of their own medicine. Inzamam has to brainwash his boys and maintain the spirit in which the series is being played.

The more I see this Pakistan team, the more I get fond of it because it is gaining the same consistency, intensity and reputation Pakistan enjoyed from 1986 first under Imran Khan and then under Wasim Akram. The only difference being that this team is young while the previous ones were experienced and included mega stars.

But what those teams could not achieve was to successfully chase targets which this side is now doing on a more regular basis. This indicates the mental toughness, determination and never-say-die policy for which all the credit must go to Inzamam.

Contrary to the general perception, the skipper has been an aggressive, courageous and tough competitor and that's what he has successfully injected into this team. I mean the way they batted in Peshawar was exemplary and praiseworthy and all the credit must go to young guns Salman Butt and Shoaib Malik for setting the perfect stage. They never took the pressure off the 329-run target and in fact, forced the Indian bowling into submission. It was sad that bad light intervened and the result came with the assistance of the Duckworth-Lewis method.

Nevertheless, I still think Pakistan would have got 18 off 18 without much trouble as the last three overs had to be shared between Zaheer Khan, Ajit Agarkar and Murali Kartik after Irfan Pathan and Sreesanth had run out of their quota.

I also think Dravid over-used his resources in an effort to make optimum use of the power plays but eventually ran out of options when it came to the death overs.

In the last 10 overs, India could collect only 62 runs chiefly because Mahendra Dhoni or Pathan or Yuvraj Singh had made their contributions up the order. I think when Sachin Tendulkar was going great guns, one of the three pinch-hitters could have been held back to use the long handle. Dravid himself and Mohammad Kaif can anchor or consolidate the innings but we all know they neither have the power nor the ability to accelerate the pace, specially in the death overs.

But these power plays are something new to cricket and the captains are not immune to use them fully. Inzamam, probably, was successful because he had a target to chase while Dravid was in a different position and was setting a target.

As far as Pakistan is concerned, I think they should have used Umar Gul with the new ball instead of Naved-ul Hasan, particularly after Shoaib Akhtar was not playing the match with an ankle injury.