Has Azhagiri finally come to terms with younger brother MK Stalin becoming the Big Boss in TN? And how the Dalit IAS officer sacked by Karunanidhi is proving to be a case of "my enemy’s enemy is my friend" for Amma 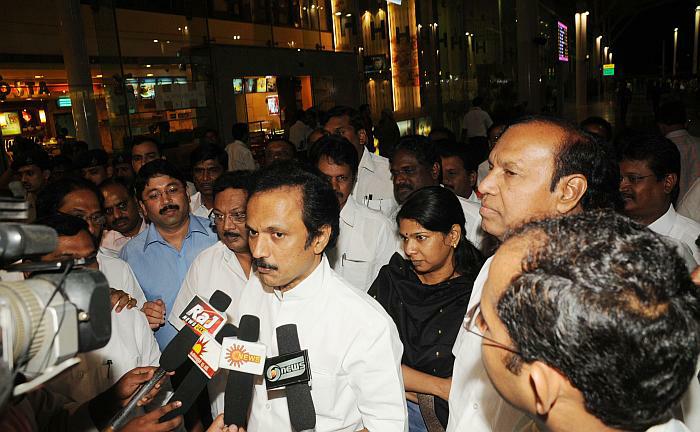 Looks like M K Azhagiri has finally come to terms with the fact that his younger brother M K Stalin will be the Big Boss in TN and he may as well carve himself a place in Delhi. They say actions speak louder than words. These have been Azhagiri’s actions in the past few weeks. He surprised DMK members of parliament including T.R. Baalu, A. Raja and Dayanidhi Maran, by waiting nearly an hour at Delhi airport on July 22 to receive Stalin who went there to attend the National Development Council meet, a first for the Madurai strongman. The next day, he drove to Tamil Nadu House and was in a huddle with Stalin for more than an hour. Their sister and Rajya Sabha MP Kanimozhi was also present.

But a week later, rumours began to circulate that he was ready to throw in the towel, resign from the cabinet, and was on his way to the state to challenge Stalin’s position – and take over the PWD portfolio that his father holds - as the successor to his father, CM Karunanidhi. It was Stalin who responded tersely, “Reports about his resignation are completely false and baseless.”

And now Azhagiri has caused quite a stir on Wednesday by calling a meeting of party MPs at his official bungalow, a clear message that he is the CM’s eyes and ears in Delhi. Is Kanimozhi eating her heart out? Not publicly at least because she is seen standing shoulder to shoulder to him at the meeting. But one can’t help noticing that she had to step back even last May and make place for her brother during the cabinet formation of UPA-2. It is not always good to be seen as ever-smiling and accommodating in politics.

Coming back to Azhagiri, why, he even made a speech – if saying “Question number 161. A statement A to E is laid on the table of the House” can be called that – in Parliament.

Asked to comment on the significance of Azhagiri convening a meeting, a DMK MP said, “This shows he is very keen on establishing a key role in Delhi politics. He used to rush to Tamil Nadu every now and then earlier but now he spends significant spans of time here and is regular in Parliament.” Is the anja nenjar (braveheart) having a change of heart?

No early polls
Speaking of assembly polls, the mounting speculation that they will be held earlier has gone out of the window with Deputy CM M. K. Stalin’s statement at a government function: “We are facing the assembly elections in 2011 and though four years have passed since we came to power, we are still confident of meeting the public as many welfare schemes have been extended.” That was the first hint. The second one can be gleaned from this, “Some ask how the scheme (the Kalaignar Housing scheme) will be completed as the term of the present government ends by 2011. But we will come to power in the 2011 elections and will carry forward the scheme.” Again, not 2010 but 2011.

My enemy’s enemy…
Talk of irony. The IAS officer C Umashankar who blew the whistle on corruption in AIADMK chief Jayalalitha’s government in 1995 after she first came to power four years earlier finds that she is fighting for him now. And CM Karunanidhi who resurrected the officer’s career after Amma put him in the doghouse has now suspended him saying he forged the certificate that says he’s a Dalit.

Another example of my enemy’s enemy is my friend. And, another example of politics Tamil Nadu ishtyle. In fact the bickering, which is picking up pace, and vitriol between the two as the assembly election nears, has caused the CM to observe: “The charges levelled by her (there is only one her: Jayalalitha) only show her intense hatred towards my family and political jealousy.”  Well, boo hoo.

Several other ironies are embedded here. While Karunanidhi has steadfastly defended union minister for Communications A Raja saying there was a witch hunt because he was a Dalit (although even the PM had asked the DMK to replace Raja for his alleged involvement in the Spectrum scam), he has no qualms about throwing Umashankar, who claims he was taken into the IAS only after his Dalit credentials were vetted by the UPSC, to the wolves. Incidentally, 20 per cent of the electorate is Dalit and since the Puthiya Tamizhagam president K. Krishnasamy (representing the Devendra Kula Velalars, a Dalit community which has a strong presence in southern districts), rushed to Jayalalitha to be a part of her ‘grand alliance’ after her successful protest rally in Coimbatore last month, Karunanidhi should worry.

And, why has it taken 20 years, during which Karunanidhi has been CM twice (1990 and 1996) and has offered Umashankar plum posts, to discover that he was allegedly faking his Dalit credentials?

Cause célèbre
No wonder the CM’s getting flak amidst allegations that he has “victimized a good officer.”  Support for the officer is growing. Several Dalit organizations and intelligentsia have been holding protest rallies.

PMK chief S Ramadoss, who specializes in taking potshots at the CM, says: “The officer is being victimized by the government for questioning some decisions. He is a straight forward officer who should be re-appointed.”

CPM state secretary Ramakrishnan too is batting for Umashankar, saying his suspension is a violation of natural justice. “Normally we do not take up issues like the suspension of an IAS officer, but Umashankar’s records show that he is an honest officer. He found corruption in ELCOT but the government is yet to take any action,” he said.

VCK general secretary D Ravikumar has demanded that Umashankar’s suspension should be revoked.

Another former IAS officer who quit to join politics, writer of Dalit literature P Sivakami says, “Umashankar’s father was a Dalit pallar and so are his siblings. So why should he produce a caste certificate? Besides, has Karunanindhi taken action against other officers accused of faking a certificate. On the contrary, these officers are in prominent positions.”

A literary magazine, Dalit Murasu, in its editorial has underlined Karunanidhi’s flip-flops on Dalits converts (Umashankar is one). It points out that Karunanidhi has demanded that Dalit Christians too should be brought under the SC quota!

Umashankar’s version
Umashankar has filed a case before the tribunal “against this illegal suspension order”. He says, “My community certificate was issued in 1986. The UPSC got it rechecked by the district administration before confirming my IAS appointment.” He has also approached the Madras high court with a writ petition questioning the legality of the Directorate of Vigilance and Anti-Corruption (DVAC) manual, on the basis of which graft charges against public servants are pursued. Umashankar who has sought the quashing of the manual, says it is used to “terrorise non-pliable” officers. Incidentally, his wife Surya, the daughter of an IAS officer in Andhra Pradesh, says while her husband earned plaudits, her domestic life was disturbed a lot. “Initially, I did not mind the frequent transfers as our children were young. But when I first heard about his suspension order, I panicked thinking of the financial crisis we will be facing.” But this plucky woman says, “I stand by whatever he does. My father was an extremely honest, upright man. Umashankar is very much like him.”

Can't keep a good man down
Umashankar who is putting up quite a fight, has made several allegations. One of them is that the CM’s wife, Rajathiammal, called him on two occasions, while he was posted at ELCOT (in 2006), to her office at Alwarpet to which he went out of  “courtesy.” “She attempted to influence me to award the contract to her men in the matter of purchase of 45,000 fishermen wireless sets. I told her that contracts are finalized only through e-tender and I should not be disturbed.”

A little background will help provide the context for his next charge. The Karunanidhi clan and the Marans (whose granduncle Karunanidhi is) fell out in May 2007 after the latter’s paper Dinakaran carried an opinion poll putting the CM’s son and currently union minister, M K Azhagiri, at the bottom as a potential CM. The war in the clan took on many forms including the Karunanidhi-led government starting Arasu Cable TV Corporation Limited to take on the Marans’ Sumangali Cable TV. However, the Marans’ Sun TV was a powerful media tool which the Marans used to hit Karunanidhi, give Jayalalitha positive coverage and even to dig up the dirt on Raja on the Spectrum scam. The Karunanidhi clan, for its part, humiliated the Marans at every turn including when they came to wish the CM at his birthday on June 3, 2008.

The family’s dirty linen was being washed in full view much to the amusement of the public. And that’s how the reunion between the Karunanidhi clan and the Marans came about in December 2008, brokered by Deputy CM M. K. Stalin. The two sides realized that if they did not come together, both sides would lose.

During the months they were at odds, Umashankar was brought in as MD of Arasu on November 3, 2008. He alleges, “I found that Sumangali Cable TV, controlled by the Maran Brothers, was indulging in large-scale destruction of optic fibre cable of Arasu to ensure their monopoly was maintained by all means.” According to him, he brought their “criminal acts” and also the involvement of a minister, Pongalur Palanichamy, in helping the destruction to the attention of the government. He says that he sent several reports including one seeking the arrest of the Marans to the government. “I charge that the CM and the Maran brothers became vengeful against me and wanted to disturb me.”

But why has it taken the DMK government over 18 months to get even with Umashankar is something he has not answered.

The dog and the bone
But Umashakar has become a bone of contention between Karunanidhi and Amma. Amma’s feisty defence of Umashakar had Karunanidhi running for cover and defending himself saying the officer had merely been suspended “after finding prima facie that he had produced a false community certificate as SC to gain an IAS appointment and that no final action had been taken.”

The government denied it had “indulged in vindictive action,” but said it had ordered the inquiry “because if the allegation against Umashankar was true, then he has snatched away the chance of a genuine Dalit candidate.”

But Jayalalitha says that “ the Dalit officer was being victimised by the DMK government for exposing and questioning the atrocities of CM’s family.” She points out that it was the responsibility of the UPSC to vet the antecedents of every recruit, not the DMK government. Therefore it was open to “speculation on the reasons behind this.” According to her, “Arasu (with an investment of Rs 400 crore) was launched ostensibly to provide cable TV connections at reasonable rates, but in reality it was meant to curb the clout of the Maran brothers.” But once the clan came together, Umashankar’s actions become inconvenient.

Umashankar had fallen foul of Jayalalithaa when she was CM from 1991-96, when he, as an official in Madurai district, found irregularities in the construction of cremation sheds.