With the team is missing out on the experience front, it is wise to call upon Anil Kumble to lend credibility to the bowling department. 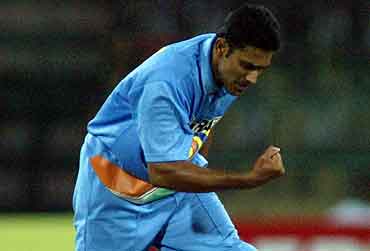 The first one-dayer in Peshawar came to a rather sad end as the game was poised so delicately. But in the end, Duckworth-Lewis equations tilted the balance in favour of the hosts. In what appears to be an incomplete defeat for the Indians, few bowling issues still face the team management.

First of all, the Indian bowling, which struggled to come to terms in the Test matches, will not find it easy playing the one-dayers on much more batsmen-friendly pitches. Having realised that the bowling is the weak link, the idea of going with five bowlers was certainly a sensible decision. It needs buffer in the form of extra bowlers chipping in with more variety.

But what is glaring is that the team is missing out on the experience front. While Zaheer Khan, the senior-most bowler, is still a shadow of his old self, consistency is eluding Ajit Agarkar time and again. Somehow, the Indian new ball pairs have never settled for too long. With Irfan Pathan leaning more towards the bat than the ball, the quest for match-winning bowlers still continue for the tourists.

With Murali Kartik getting intermittent calls into the side, the team is only left with Harbhajan Singh to rely upon. Under such circumstances, it is certainly wise to call upon Anil Kumble to lend credibility to the bowling department. If anybody can give the right advice to the bowlers and also grudgingly take part in the game, it can be only be this 'Silent Assassin'.

It is true that the playing 12 (including the super sub) should be picked keeping in mind the 2007 World Cup. Till then, confidence building measures for the bowlers has to be an integral part. Losing too many games and holding the bowlers responsible will erode their conviction. So it will not be a bad idea to recall Anil to help the battered bowling department.

Sachin Tendulkar played a well-defined role for the team. His approach must have surprised many in the initial part of his innings. But if one can read between the lines, he was the one infusing energy into Irfan and Mahendra Singh Dhoni at the centre.

The senior-most player not only leveraged his wealth of experience but also did even out with lesser mortals at the crease. This act of mentoring in a game situation is where he brings real value to the team. Scoring runs from his wood is one thing but making the others score is the most important thing.

Few years ago, the game plan would have been for Sachin to play his aggressive shots and the rest revolved around. Now, it is still Sachin at the centre but other batsmen play the shots.

In a way, it is a reversal of roles where Sachin does not open up to take the extra risk initially but enable other batsmen to unleash through his learning and monitoring from the other end.

The most heartening sight was to see Mohammad Asif bowling as well as he did in the Tests. On sub-continent wickets, it is so crucial to bowl well during the intial part of one's career to have a sense of belonging in both forms of the game.

Graduating to the white ball has been easy for this lean youngster. Hitting the right areas consistently and being repetitious are good habits in fast bowling. Asif has worked hard to replace Mohammad Sami, whose potential is yet to be realised.

As a captain, Rahul Dravid was impeccable. Timely promotion of Dhoni and Yuvraj Singh in the batting order helped India to keep the momentum going. Shuffling the bowlers was so important to bring about the variation as long spells made them too predictable.

From the Pakistan point of view, they almost played the game into India's hand. Mindless running and batting by Shahid Afridi and Mohammed Yousuf proved that pressure can bring the best down to their knees.

With Shoaib Akthar yet to make his presence felt, Pakistan may appear to have an upper hand. But if Indian batsmen can bat the way they did on Monday, the bowling edge of the hosts can be negated.