Last year, baby-bird season stretched from late May till mid-July. This year the focus of attention was a pair of dainty, yellow-green White Eyes... 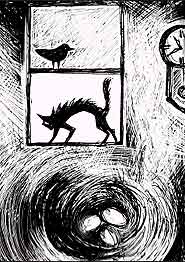 Last year, baby-bird season stretched from late May till mid-July. We reared a fledgling sparrow for two months, returned a bewildered young bulbul to its family and ferried a gawky pigeon squab to the JeevAshram animal shelter in Gurgaon. It’s hard labour all the way—mixing bird-feed, keeping the ceiling fans off, fretting about flight lessons and neighbourhood cats. Then one day, tiny wings whirr with adult confidence and...they’re gone.

This year the focus of attention was a pair of dainty, yellow-green White Eyes. They constructed their nest in the bamboo just outside the kitchen window. Their conjugal home was a fragile cup of twigs and cobwebs. Inside it were three pale blue eggs. They hatched a week after we first saw them. Minute twitching movements were visible from the nest. I was in a frenzy to see more, but the binoculars were out of range. So one morning, I stood on a step ladder, and thrust my little Nikon Coolpix practically into the nest, which was perhaps two feet higher than my head. I couldn’t look through the view-finder, so I set the mode to ‘close-up’, turned the flash off, and pressed the button.

After a couple of botched attempts, success! Three naked fledglings sprang into sharp focus in the camera’s viewing window. It was a thrilling moment and I couldn’t get over the sense of entering the hidden world of another species’ family life. The tiny chicks had bald pink heads, chrome yellow beaks, gaping carmine mouths and bulbous eyes, huge and dark. Two were more developed than the third, whom we dubbed "Scrawny". Sure enough, 48 hours later, the bigger pair had popped out of the nest, teetering like tightrope walkers on the nearest bamboo twiglet. Later in the day, they had moved to the centre of the bamboo clump, huddling together. By tea-time, they’d adventured into the front garden.

Poor Scrawny! Now that he was alone, his parents would have a hard time flying back and forth, feeding all three offspring. The logic of nature is that only the strong survive: if Scrawny was too weak to leave the nest he’d have to be abandoned. I no longer wanted to risk taking close-ups of the nest in case my presence caused trauma to the lonely little creature, so I did my best to zoom in from afar. The result was one blurred and indistinct portrait of a tiny nestling, hardly bigger than an animated peanut, gazing wistfully out at the world from his windtossed home. I was so sure he would not make it through the night that I posted the picture along with a tearful requiem, at my blog. But the next morning, there he was, alive and squeaking peevishly. His parents, tireless with devotion, were ferrying food to all three babies.

Every day brought new adventures. Monday, Scrawny fell out of the nest. We picked him up and put him back in (whereupon he leapt right out again, in shock). Tuesday, his siblings returned and all three baby birds cuddled close within the bamboo. Wednesday, the siblings flew to the front garden and Scrawny followed, fluttering and faltering all the way. Thursday, all three were cuddling close again, but in the front garden.

We lost sight of them thereafter.

What a relief! No worries now, till babybird season comes around next year.