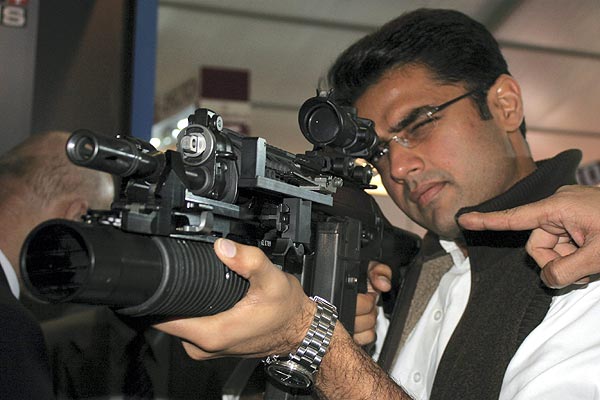 "If it's a good man, he will be stopped by the pneumatic tyre killers." The Chief Operating officer explains earnestly, pointing to the mean looking metallic teeth that threaten to slash to ribbons anything that rolls over it. "If it's a bad man however, he will continue on. Then these bollards will rise and stop him." As he says this, a metallic cylinder rises from the floor with great sound and fury. And just in case the ‘bad man' escapes this too, there is the crash rated barrier. A large screen runs an animation video on spool, graphically demonstrating how the tyre killers, bollards and barriers can combat an onslaught of suicide bombers.

Together, these three are the core of the "affordable and impregnable security from Israel" being showcased at the Homeland Security fair in Greater Noida. A 100 per cent owned subsidiary of a Holon-based company that offers "perimeter protection solutions" — a popular phrase in this market — these makers of tyre killers and bollards set up shop in Ahmedabad in 2010.

"It's closer to the port and there are no workers unions in Ahmedabad." He smiles, the wry smile of those who feel entitled to labour trouble-free factories. It is also a smile that expects empathy in return. He gets none.

A more recent visit to the website informs that they have also bagged orders for bollards at Hyatt chain of hotels, for an equity fund office in Madhya Pradesh and Tata Motors in Jamshedpur. Business is good. No doubt on that count. The COO, himself a major in the Indian Army went to Israel to attend a course on suicide attacks and swiftly decided on an early retirement in favour of this lucrative security business. Indeed, this industry is swarming with ex-army men, short service commission officers having finished their terms, voluntary retirees and venerable generals and major generals. Some, senior managers and directors; some, spokespersons and consultants; some, editors of trade magazines; and others simply ‘security experts' and regular fixtures on TV shows.

The cavernous interiors of the Noida Expo building are filled with companies — British, Israeli, Korean, Taiwanese and Indian multinationals such as Godrej to down-right local, cottage types operating out of West Delhi — peddling a plethora of wares. Bollards are a favourite of course, tyre killers and biometric technology are hot too — but the winner hands down is the CCTV camera. There is a great array to choose from: intelligent video armonia (because a large number of cameras must be able to work together "like musicians in an orchestra"), "full High Definition network solution" and "State of the art surveillance". And oh, we have a heart: part of the proceeds from the sales of Ever Focus — offering "total surveillance solutions" — go to the NGO CRY (Child Rights and You).

The hard-sell can produce an unintended irony though. The Japanese Fujitsu advertises PalmSecure, allegedly "the world's most advanced biometric authentication system", as "the fastest, simplest, most versatile and efficient system available to verify your identity: to make sure that you are, in fact, who you say you are." Who precisely is it targeting? Those very, whose identity is to be authenticated through its technology? Or perhaps, it imagines a world where we are all willing subjects and pliant bodies, participating in our own surveillance and monitoring.

The Homeland Security Fair is only one of the many exhibitions and expos that focus on the sale of surveillance devices, protective (as in "perimeter protection") equipment and associated ancillaries. It is, in fact, a rather latecomer in the field.

The first mover was the Ministry of Defence, which set up the Defence Exhibition Organisation as early as 1981 to showcase the indigenous defence industry, entirely public sector with DRDO and ordnance factories, by organizing exhibitions in India and abroad. Beginning with Aero India in 1996, and the Land and Naval Systems exhibition, Defexpo, in 1999, its biennale exhibitions rapidly established themselves as preeminent trade hubs, so much so that by 2010, the total area of exhibition had spread to 40,000 square metres — from 17000 sq metres in the 2008 exhibition — and the rental had skyrocketed. Israel led the foreign exhibitors in renting as much as 1200 square metres of display space by shelling out Rs 3.5 crores. By 2012, it had grown even bigger: 567 exhibitors from 32 countries: SAAB, ABG Shipyard, Boeing, Polaris, HAL, Mahindra and Mahindra, TATA, Sirkosky, shipbuilders Navantia, Israel Aerospace Industry, Vectra, BAE Systems.i

What draws these builders of ships, makers of helicopters, manufacturers of airplanes and assorted military vehicles to the India expo in such large numbers? Inaugurating the Expo, the then Minister of state for Defence, Pallam Raju, appreciated the "unprecedented growth" of the Defexpo, which he saw as a reflection of the "size of the defence market in India." To be sure, these are not empty words of a minster seducing investors. Budgetary allocations for defence have been steadily soaring the past few years. In 2011-12, the union defence budget comprised 1.8 per cent of the total GDP; in the following year, the budget shot up marginally to 1.9 per cent of the GDP.

The 15-year Long Term Integrated Perspective Plan (LTIPP) approved by the Defence Acquisition Council, which is the source of defence planning, envisages the allocation of defence to touch three per cent of the total GDP — a feat yet not attained. However, in absolute numbers, the outlays for defence far outstrip allocations for social welfare programmes. Its share in terms of expenditure was higher than the combined spending of health and family welfare, school education and literacy schemes, higher education and rural welfare.

These high figures for defence spending weren't high enough for some though. Defence budget watchers complained that the forces had underspent the outlays allocated to them in 2011-12, surrendering a portion at the time of revised estimates. A Times of India report sensationalized and hyped the alleged cuts in capital outlays by as much as Rs 100 crores, which, it predicted would stymie the acquisition processii. This was despite the fact that 2013-14 budget had displayed an increase in both revenue and capital expenditure — despite the Defence Minister's warning that a dip in budget was in the offing, the finance minister had refrained from slashing the defence funds. Indeed, the outlays had bloated, except that the percentage of GDP had dropped to 1.79 as opposed to last year's healthy 1.93.

India has been for some years now in the throes of a procurement cycle. As its Soviet-era jets and submarines begin to age and rust, and as it is blinded by its own pretensions to regional hegemony, its multitudinous insurgencies calling to be quelled, and as the state-owned ordnance factories and PSUs fail to match up — the wheels of the procurement cycle turn, slowly, laboriously, oiled along by DPP. Defence Procurement Procedure, formulated in 2001, has undergone several revisions, each amendment further aiding private participation, turning private players from mere suppliers of raw materials and parts to full-scale licensed producers.

In early 2014, SIPRI released 2009-2013 (not annual) figures of international transfer of weapons, confirmed India at top of the pile. India accounted for 14 percent of global arms imports, and its imports were three times greater than either China or Pakistan.

In all, India accounted for 12 per cent of global imports. Its preeminence derived from its extensive shopping through the 2000s, reflected in the budgetary spends: over 100 Su-30MKI combat aircraft from Russia, three A-50EhI airborne early warning aircrafts (with components sourced from Israel, Russia and Uzbekistan), an Akula nuclear-powered submarine from Russiaiii; the first of eight P-8I anti-submarine warfare aircraft, ten C 17 Globemaster III Airlifter and six C 130 J Super Hercules Transport aircraft from the United States; six Scorpene submarines from France. The Defence Minister announced in the Lok Sabha in May 2013 that the procurement of 100 self-propelled artillery howitzers was on the anvil.

But the most massive deal ever in the military history of the country, and one of the biggest in the world too, produced by Indian Air Force's modernization drive is the purchase of 126 Medium multi role combat aircraft worth upwards of 15 billion USD. There is some dispute as to what the real costs of the purchase will ultimately be, with some arguing that it should have been estimated at USD 27 billion even in 2009.

Military expenditure in India is forecasted to grow at a CAGR of 8.3 per cent and is expected to exceed $ 75 billion per year by 2020. Different agencies estimated slightly different numbers for the future defence budgets but all converged on the prediction that it was only bound to grow. As the brochure from one of the many defence exhibitions cheerfully outlined: "The Indian government has indicated no slowdown in homeland security and defence spending despite the global meltdown."

A recession struck Western arms industry looks at India's insatiable appetite for arms and defence equipment to stay afloat. All the big boys of international arms trade have come out to play in India.