Beyond The Republic Of JNU

I ran into an ABVP march. And even before my political instincts kicked in, I felt unsettled by their sight... 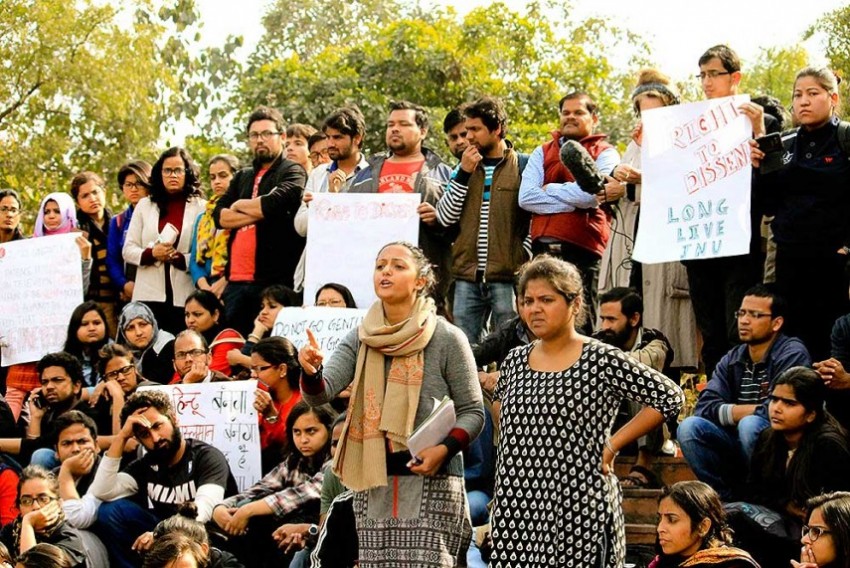 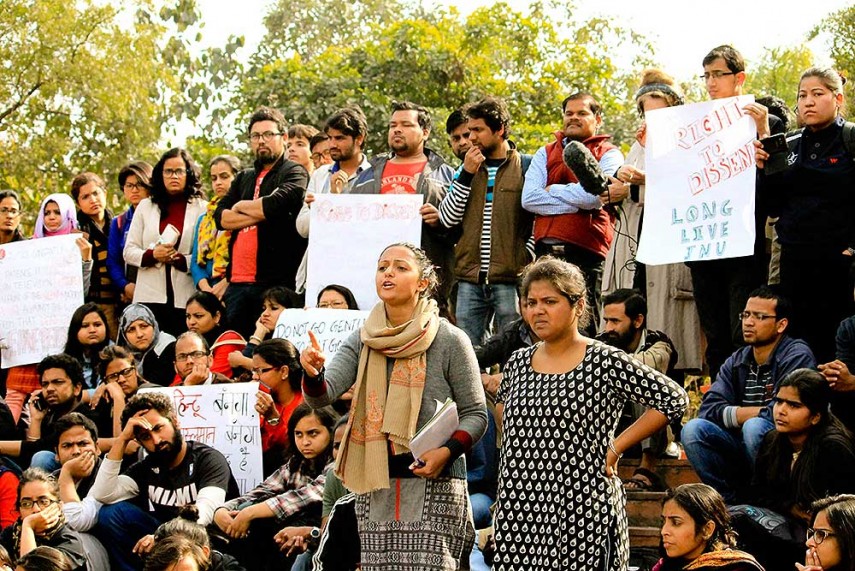 When I came to Delhi last year, it was midsummer and everything that felt hostile in the city—the eyes of men looking me up and down, the casual apathy of strangers, the shrill right-wing sentiments that assaulted every day on the news—was amplified by the harsh sun and sticky heat. As I spent my first month gasping for breath and trying to find a space in the city that I could feel safe and happy in, many of my friends, some now abroad, some back in Calcutta, kept saying I should go hang out in JNU.

The adjectives I associated with it were 'compassionate', 'interesting', 'intelligent'. A place where there was shade, both for people and for their ideas, especially ideas that the city finds hard to house sometimes. Away from the bustle, along the long lanes, I was told I would find some breathing space. When I began to spend time in JNU, I saw exactly what they had meant.

On Monday evening, as the auto pulled over, things looked very different. There were vans with generators and cameras. Police vans full of gruff men watching every move of every person. There were police booths at the entrance checking everyone. In one sweep, what was till now a safe space had become its exact opposite—a secure space. I wondered exactly whose safety was being guarded by all the surveillance, all the theatrics of gate-keeping. Since Rajnath Singh already sees the campus as a hub of terrorists who can be beaten up outside courts and denied justice within the courtroom, why monitor the campus them so closely in their home? Is it for the protection of students, the protection of the nation from anti-nationals or simply a pathetic, long-desired need to meddle?

As I made my way from the main gate to the administrative building where the Student Union meeting was going on, things began to get clearer. For one thing, I ran into an Akhil Bharatiya Vidhyarthi Parishad (ABVP) march. And even before my political instincts kicked in, I felt unsettled by their sight. It took a few minutes to realise why: I could not see a single woman in the entire march. I could not see a single openly queer person. Hell, I could not even see anyone wearing something other than carefully collared-up shirts and greasy, self-satisfied smiles on their faces. The men kept staring at people on the other side of the road. They smirked and folded back their shirt-sleeves.

Then they shrieked, 'Vande Mataram' and 'Kesariya laherayega' ('the saffron will take over') until one of them had the sense to start 'tiranga laharayega' ('the tricolour will unfold'). They were giving out pamphlets with ABVP written in large type, no doubt followed by a measured and entirely reasonable extolment of Mother India and her many virtues. I was standing in a group of five people. They handed one to everyone except me. Maybe I look too anti-national, too far gone for conversion—may be it was my obscene haircut or obscene refusal to stop staring.

They turned right. I kept on walking.

I thought about this charge—being anti-national. This strange legal code that has wrecked lives and imprisoned people and allowed possessive orthodoxies to hug power to themselves. Section 124-A of the India Penal Code is currently making life hell for the president of the JNUSU, Kanhaiya Kumar. ABP Live reported earlier that his father is disabled and the family severely short of money and resources. The state, whose sole purpose, as far as my education has convinced me, is to provide for the vulnerable, is a massive failure. What it can do, however, is recognise threats to itself.

'Government established by law', it says. Whose law? Law of electoral democracy? Law of elections manipulated by threats to the electorate, by skilful and flamboyant misinformation disguised as electoral campaigns that are dodgy transactions between political parties and big business houses? What does 'law' mean in a state where political science is optional after class X in schools? And what does the constitution mean in a nation where quoting Ambedkar can get you kicked off a campus? In fact, while we are at it, what does education mean in a state where parents who can afford better will never send their child to a state-funded school?

In an op-ed piece that is doing the rounds, the Indian Express has argued how, actually, the government is the one that is being anti-national because it will not allow for the nation to be improved by dissent. And somehow those protestors at JNU, who were asking for self-determination of Kashmir and for India to cease to be, although perhaps 'misguided' were still being patriotic because, hey, through their critique, the nation would ultimately improve. Perhaps this is a strategic argument. A rhetorical necessity at a time when lives are at stake. But other than that, why is it so important to defend patriotism? So much so that when it is not there it has to be brought back as some sort of meta-patriotism?

The biggest problem I have with the rhetoric of those who support the protests is that they are defending the right of JNU to be a space for dissent, for experiments of thoughts, at the expense of other units of space. The argument goes, 'may be asking for Kashmir to be free is wrong, but we need to ask these painful questions and universities are a space where such dissent can be raised within the boundaries of sacred freedom that is granted to scholars.' As if the government's crime lies in not being okay with the JNU campus being a tidy sacrifice so that the rest of this confused, struggling cluster of former kingdoms, bifurcated villages and bled-out, partitioned cities can maintain its claim to undisturbed, undoubted unity.

At its very best, a state can be a centralisation of power, money and human intellect that gives us public-funded universities, libraries, archives, theatres, labs and schools. Shehla Rashid, the acting president of the JNUSU got it right yesterday when she said that because the students of JNU are educated by the taxpayers' money they remember their duties and responsibilities more than anyone else. I saw her today when I was there. She was coordinating, planning, advising, talking to people relentlessly. She looked tired but when I asked her how she felt about the responsibility she is holding right now, she said, "I am not overburdened. We work all the time. But it feels tragic because I do not want to be the president. We want Kanhaiya back. We want to do what we do because of our politics, not because everything is in a crisis."

I think the same applies to the movement. To JNU. To why we need to defend it. It is not simply because JNU is in a crisis and needs to be protected as an inviolable space in an otherwise violent, unpredictable landscape but because we must claim back the ability to practise our politics, to not have to simplify politics into violence, to be able to point out absurdities—absurdities of the state, of religion, of big money. And we should be able to do it anywhere in the world.