Asia Cup 2018 Final: Five Players To Look Out For

Skipper Rohit Sharma, his opening partner Shikhar Dhawan, and bowlers Bhuvneshwar Kumar and Jasprit Bumrah will be back for the final. 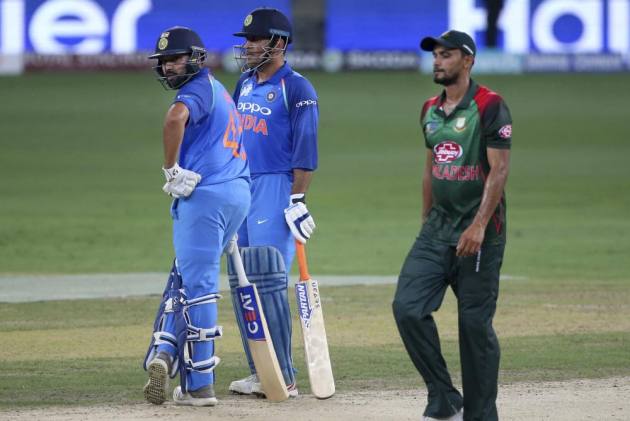 Finally, it's here. Defending champions India will take on spirited Bangladesh in the final of 2018 Asia Cup at Dubai on Friday.

India, having already won the title six times and also thanks to their superior record, start as the obvious favourites against the two-time runner-ups.

After fielding a second-string side in their last Super Four match against Afghanistan, a full strength India team will enter the final.

India Vs Bangladesh: When And Where To Watch Asia Cup Final Live

Skipper Rohit Sharma, his opening partner Shikhar Dhawan, and bowlers Bhuvneshwar Kumar and Jasprit Bumrah will be back for the final.

In contrast, Bangladesh are without their mercurial all-rounder Shakib Al Hasan. They have already lost opener Tamim Iqbal.

But they can still pack a punch or two which can knock any team out.

Here we look at five players who are likely to make decisive contributions:

Rohit Sharma - India captain has been brilliant so far in the tournament. Spurred by the Test snub, the right-handed batsman has shown enough maturity even to demand a permanent captainship, at least in the limited overs' formats. He has 269 runs at an average of 134.50, thanks to a hundred and two fifties. If he gets going, Bangladesh will be in big trouble.

Mahendra Singh Dhoni: The former India captain has only 41 runs, with 33 alone coming against Bangladesh in their Super Four meeting. And India's middle-order still revolves around him. If Indian openers failed to fire, the burden will be on him. And many would like to believe that Dhoni still has that game. Yea, some are even talking about next year's World Cup in England.

Ravindra Jadeja: Hardik Pandya's freak injury proved to be a silver lining for India as his replacement Ravindra Jadeja made an instant impact. In their Super Four encounter, the all-rounder took four wickets than impressed again against Afghanistan, taking three wickets and scored crucial 25 runs. He will be one crucial clog in the Indian wheel today. He already has seven wickets, three behind tournament's leading wicket-taker Rashid Khan's 10.

Mustafizur Rahman: Bangladesh will rely heavily on the talented pacer, who started his ODI career with back-to-back five-wicket hauls. The absence of injured Shakib Al Hasan will also put extra pressure on him, he being the main strike bowler of the team. The 23-year-old has eight wickets, Indian openers will be wary of his guile.

Mushfiqur Rahim: He is the big fish. At just 1.6m, the wicketkeeper-batsman is one of the best shock absorbers in any sport today. The amount of pressure he takes for the team is unbelievable. The 31-year-old crisis man will hope to win at least a big title before retirement, and this is one good chance. With 297 runs, he is tournament's second highest scorer.

Indian opener Shikhar Dhawan, Bangladesh captain Mashrafe Mortaza, India pacer Jasprit Bumrah are three of the many players who can shine today. In fact, Dhawan and Dinesh Karthik can emulate the Mohammad Azharuddin's feat of winning the man of the match awards in two Asia Cup finals.

Dhawan was the man of the match in last edition's final, and Karthik won it in 2010. Former India captain Azharuddin won in back-to-back tournaments, 1991 and 1995.