An Indian In Capitol Hill

Dino Teppara becomes the first Indian American to ever serve as chief of staff to a Republican member of Congress, in either the House of Representatives or Senate—the highest ranking Indian American staff member in the House. 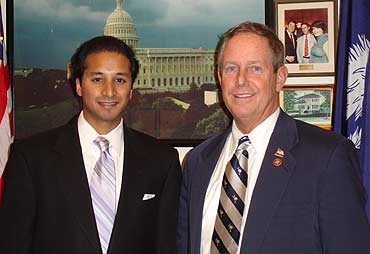 South Carolina Republican Congressman Joe Wilson has appointed an Indian American to serve as his chief of staff and in doing so has created a bit of history.

Dino Teppara has become the first Indian American to ever serve as chief of staff to a Republican member of Congress, in either the House of Representatives or Senate. He is now the highest ranking Indian American staff member in the House. There are an average of 25-30 Hill staffers of South Asian origin on Capitol Hill.

Announcing the promotion for Mr. Teppara, till recently legislative director for the congressman, Mr. Wilson said, "Dino has worked on behalf of South Carolina's Second Congressional District for the past five years, and he brings a wealth of knowledge to this position. I am confident in his ability to lead the office and proud that we will begin the 110th Congress with an able and committed team."

In an interview with this correspondent, Mr. Teppara said he was "greatly honoured."

"To serve your hometown Congressman is very special. You have ties to the district, you travel there, your family lives there, and you meet constituents, so there is a very personal connection," Mr. Teppara said. "Also, Congressman Wilson has been a longtime supporter of the Indian American community, so it is a great honor to be the first [Indian American] GOP Chief of Staff ever in Congress."

He will be responsible for overseeing the budget, staff and agenda for Mr. Wilson's office. "It is a leadership role requiring someone to be organized, a team player, and being a good manager to maintain solid relationships with all the staff," he explained.

By his own admission, Mr. Teppara ended up on Capitol Hill "by accident." Not sure he would like it, he had planned to work in the congressman's office for only a year. "Now, I am very inspired to be here and think very highly of public service," he said.

In 2005, Mr. Teppara was offered a top political appointment by President George W. Bush's administration at the Department of Justice, but opted to remain with Mr. Wilson. He is a veteran of nearly 10 campaigns, including Congressman Bobby Jindal's gubernatorial race in Louisiana 2003. Mr. Jindal lost that race but went on to become the second Indian American in Congress and the only one in the present legislative body.

The late Dalip Singh Saund was the first Indian American in Congress. A California Democrat, Mr. Saund was honoured recently when Congress approved the installation of his portrait on Capitol Hill. Mr. Teppara wrote the resolution calling on Congress to place a portrait of Mr. Saund on Capitol Hill. "This was very important to me personally, because I did this after reading his biography, which was incredibly inspiring. I focused on the portrait when I found out efforts were underway to honor the first African American, first Hispanic, and first woman elected to Congress, but there was no effort being made yet to honor Saund, who was not only the first Asian American but the first Indian American ever elected to Congress," Mr. Teppara said. "As an Indian American working in Congress, I found his triumphant story most inspiring and wanted to ensure he was properly honored."

Mr. Teppara believes people of Indian origin play a crucial role in pushing legislation that benefits the nearly two million strong Indian American community. "The [U.S.-India] civilian nuclear deal is a prime example" of a situation in which Indian American Congressional staffers can help, he said. As the nuclear bills wound their way through Congress, his role was to help inform other Members of Congress about the benefits of the deal through his Congressman. He drafted talking points, sent out Dear Colleague letters, attended briefings, and had crucial access to information and contacts on and off the Hill such as in the Bush Administration, that enabled him to help push the deal forward in conjunction with "our allies - the business community, State Department, and White House." The bill passed with overwhelming support last year and Mr. Bush signed it into law.

In 2005, during the 108th Congress, Mr. Teppara served as the primary Republican contact for the Congressional Caucus on India and Indian Americans, which Mr. Wilson co-chaired. He created the official India Caucus Web site and helped grow the Republican membership of the Caucus to its highest level ever.