Is it time the postmenopausal brigade of moral custodians like Ashaji and Vyjanthimalaji gave way to people like those on the jury of the digital-fest: R.K. Laxman, Shyam Benegal, Vidhu Vinod Chopra, Derek Malcolm and Shekhar Kapoor? 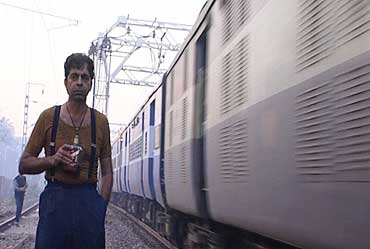 Two films that were banned and couldn’t get past the censors, Pankaj Advani’s Urf Professor and Siddharth Srinivasan’s Divya Drishti, lolloped past the likes of Muzaffar Ali and Nishit Saran to win the awards at the just-concluded digital fest in New Delhi. Besides Channel V’s Bheja Fry that made him a Y-Generation cult figure, Advani’s Sunday won two national awards and was shown at the IFFI in Calcutta, the children’s film fest at Udaipur and at the Chicago international children’s fest. Like Srinivasan (whose Tightrope Walker was shown at the 57th Venice International Film Festival) then, Advani is no stranger to plaudits -- and hence persona grata, susceptible to being co-opted, with everything to lose by making a film that goes against the grain.

But this is India, and Advani’s award-winning Urf Professor is no innocuous children’s film, but a non-PC action comedy slathered in swearwords, semen, bulletspray and bloodspill. This is what makes Urf news. Suddenly, it is possible to bash Bollywood’s sacred cows, make an unapologetic sloshfest of gonads and gore, play it to critical and mainstream audiences alike, and not only get away with it but even win awards. Like a good, button-popping Mel Brooks film is meant to, Urf "rises below vulgarity".

If Kundan Shah, our father of black comedy, were directing without his clothes on, this would be what the product would look, sound and possibly smell like. (Or perhaps not, for he was more cerebral, and never upped the ick/slick/gimmick quotient so high. This, despite the fact that he co-wrote Kabhi Hanh Kabhi Naa with Advani.) Of course, the film is still beleaguered. Directors like Shyam Benegal and critics like Derek Malcolm on the digital jury have carried it this far. The postmenopausal brigade of moral custodians like Ashaji and Vyjanthimalaji have delicate appetites and will not take kindly to an upstart cocking a snook at all their shopworn shibboleths on Indian values.

The first scene opens with the much-flogged wedding night staple of Hindi movies: insensitive groom, quivering bride. Her Coyness is quizzed by her paranoid husband about the men in her life after he has been bragging about the women in his. So far so bad. All of a sudden, the headshaking and blushing is gleefully derailed. In a take-no-prisoners Minnie Mouse voice on horrific fast forward, she mutates from a goongi gudiya to a nympho who demurely rattles off names of men she’s given breastsucks and blowjobs to -- brothers Ajay and Vijay, Subramaniam in her dad’s office, Abdullah the cook -- the stained laundry list is endless, graphic and hilarious.

Nemesis must follow. Her shattered husband wants to bump her off. This is where urf/a.k.a./alias Professor steps in -– a rather unlikely, outsized hitman whose inconvenient myopia and hugely ill-timed asthma attacks cause much confusion and grief. He finds two red bikini-clad targets instead of one, loses his glasses, making things go exceedingly wrong in a plot riddled with coincidences, oversights, one-upmanship, doublecrossings, double roles, three-way phone conversations reminiscent of Jaane Bhi Do Yaaron, impeccable timing and dubious taste. There are serial sight gags, but it is the verbal onslaught that is so unexpected. There is something about obscenity in the vernacular that is always refreshing and -- for those of us who live in north India at least -- almost a homecoming.

There is the god-fearing, don-fearing Punjabi hood (called -– what else? -- Hudda) who prays soulfully, lights his cigarette with the puja pradeep, and tries to get to the bottom of the rather knotty problem presented by a couple trying to get each other bumped off: whom to kill first, and how to get the money for a job well-done from each spouse/corpse. 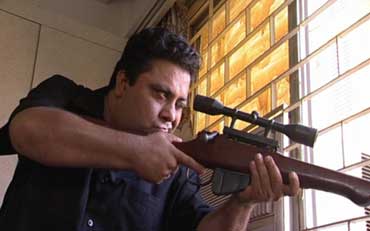 And, of course, there is a smalltime crook who gets sucked into the big time in what promises to be a romantic not-very-good-boy-meets-really-bad-girl-on-the-run story but ends anti-romantically, like Godard’s earlier more playful films.

It is raw and stark and loud and may not be to everyone’s taste, it needs cutting, it milks old formulae in new bottles, but it’s still different. And if -- despite the disappointment of its festival debut cancellation by spoilsport censors -- it can get frontbenchers to whistle and art film types to fall off their seats laughing at its hastily-arranged private screening at the British Council, it can’t be such a bad thing. Consider this. We don’t have our equivalent of mob sendups like Married To The Boss or Analyze This or Sopranos on HBO, or better still, Rambo/Casablanca/Bond sendups like the brilliant Hot Shots, or even the inspired lunacy of There’s Something About Mary. Why, we don’t even have our own Naked Gun and Airplane! and National Lampoon series. What we have is Johnny Lever making silly faces. So we must rejoice when an over-the-top gross-out action film remains nihilistic and no-brow and yet sustains intelligent interest in a patchy and nascent digital package.

There is hope yet, gentlemen.