'To me it feels like the right time to go. I've trusted my instinct in the past and I feel it's time to trust it again.' 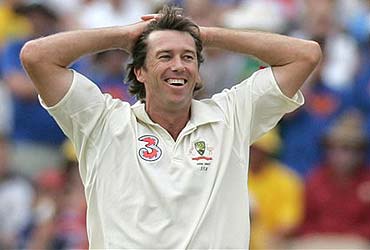 Glenn McGrath, the most successful fast bowler in Test cricket who tormented batsmen with his amazing line and length, announced his retirement from the longer version of the game but would continue to play in one-dayers till the World Cup next year.

Out of his 555 Test wickets in 122 matches, McGrath accounted for 51 Indian batsmen in 11 Tests, getting the scalp of star batsman Sachin Tendulkar six times in their much-hyped duels. In one-dayers against India, he took 34 wickets in 25 matches.

McGrath, who had only yesterday dismissed reports of an impending retirement, made known his decision after a training session in Melbourne ahead of the fourth Ashes Test starting on December 26.

"It's probably a perfect or fitting ending. It's only been the last few games that I've really thought about it.

"To me it feels like the right time to go and I've trusted my instinct in the past and I feel it's time to trust it again," McGrath said.

McGrath, who became the third Aussie after Damien Martyn and Warne to announce his retirement during the Ashes, also said he looked forward to playing the remainder of the series now that the announcement was off his chest.

"Hopefully we can get out there and play as well as we have for the whole summer and really nail these last two Tests."

The bowler did not think that his departure would leave a vaccum in the Australian side, saying there was plenty of talent waiting to make the grade.

However, he did concede that the gap left by Warne would be difficult to fill.

"To me he's one of the best cricketers there's been."

McGrath is likely to spend more time with his wife Jane, who has been diagnosed with breast cancer. He had spent most of 2006 out of international cricket to be with his wife.

However, McGrath said his wife's illness had played no part in his decision.

"In respect to Jane, her health has nothing to do the decision I've made here today or over the last few weeks."

Cricket Australia chief executive James Sutherland said McGrath had achieved the rare distinction of being a consistent match-winner in Test and ODIs for 13 years.

"They say bowlers win matches, they must have been thinking of players like Glenn McGrath when they said that," Sutherland said.

"His remorseless accuracy and forensic probing of the slightest weakness in a batsman's technique is legendary."