A Patriarch Of Arab Literature

Abdelrehman Munif (1933-2004) was a storyteller without compare, who enriched the culture of the Arab world as a whole. He was a strong and independent-minded intellectual who refused to bend the knee before Prince or Colonel. 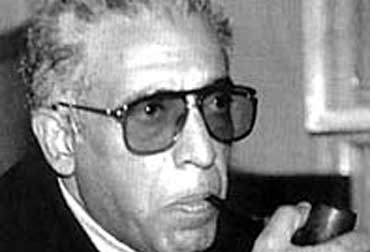 Abdelrehman Munif, who died, after a protracted illness, in his Damascus exile on 24 January 2004, was one of the most gifted Arab novelists of the 20th century. Together with Naguib Mahfouz, he succeeded in transforming the literary landscape of the Arab world by making the novel central to its cultural and political concerns just as it had been in Europe during most of the 19th century.

Born in Amman in 1933 to a Saudi trader and an Iraqi mother, Munif spent his first decade in this city. Despite the defeat of the Ottoman Empire, this was still a world dominated by cities, a world where frontiers were porous and Arab families and trade moved comfortably from Jerusalem to Cairo to Baghdad to Damascus and beyond. All these territories (with the excetion of Damascus and Beirut) were under the control of the British Empire. The lines had been drawn in the sand but no barbed wire or armed guards policed them. Abdelrehman Munif went to primary school in Amman, a secondary school in Baghdad and the university in Cairo.

Later he would recall the Amman of his childhood in a delightful memoir, Story of a City: A Childhood in Amman (London, 1996), in which he described school-life in the mid-Forties:

Sometimes, the names of the cities in other Arab countries were confused with one another or not easily remembered, but all the hands of the students would shoot up when the teacher asked who could name five cities in Palestine. Competing voices drowned each other out: Jerusalem, Jaffa, Haifa, Gaza, Lydda, Ramlah, Acre, Safad, Ramallah, Hebron, Palestine was more than just a land and a people. In the mind of every Arab it is a constellation of meanings, symbols and connotations which have accumulated and filtered down through several generations.

And the names of old towns of Palestine continued to reverberate in Munif's own head. He could never forget the Palestinian refugees whose anguish he had glimpsed in his early teens. Only a few months ago he referred to Sharon as the biggest abomination in the Arab East.

Throughout his teenage years he would spend the summer holidays in Peninsula with his Saudi family. It was here that he heard the stories and spoke with the Bedouins and the oil-merchants and the nouveau riche Emirs who would later populate his fictions. Like the bulk of his generation he was shattered by the Palestinian catastrophe of 1948 and became a staunch Arab nationalist. The rise of Nasser in Egypt and the revolutionary wave that swept the Arab world as a result did not pass him by and he became a secular socialist militant. For his political opposition to the royal family he was stripped of his Saudi nationality in 1963 and fled to Baghdad. Here he obtained work as an economist in the petroleum industry and understood the importance of the liquid gold that lay underneath the sands of Arabia and Mesopotamia. His knowledge of the commodity and the industry was used with devastating effect in his novels.

He started writing fiction in the late Seventies after resigning from membership of the Ba'ath Party leadership in Baghdad and moving to neighbouring Damascus. His active political life was now at an end. Henceforth his mind was fully concentrated on his fictions. He wrote a total of fifteen novels, but it was the Cities of Salt --a quintet based on the transformation of the Arab peninsula from ancient Bedouin homeland to a hybrid tribal kleptocracy floating on oil--that established his reputation in the Arab world. He depicted the surprise, fear, uneasiness and tension that gripped Saudi Arabia after the discovery of oil and his portraits of the country's rulers were thinly disguised, causing a great deal of merriment in the Arab street and the odd palace.

The two 'M's -- Mahfouz and Munif -- became the patriarchs of Arab literature. Mahfouz's Balzacian reconstruction of family life in Cairo from the beginning of the twentieth century to the rise of Nasser, won him the Nobel.

Many Arab critics (though not Munif) felt that it was the Saudi who merited the award, but his savage and surreal satires of the Royal family their entourage and the oilmen, had made him contraband within official culture. His books were banned in Saudi Arabia and elsewhere in the Gulf. But they travelled nonetheless and were read secretly by many a Peninsula potentate. Munif's genius lay in his ability to impose the intellectual and the popular on characters that were neither.

Three novels of the Saudi quintet were translated into English by Peter Theroux -- Cities of Salt, The Trench and Variations on Night and Day-and published by Knopf in New York. But the American critics did not like them and John Updike famously denounced the books for not being the fiction he was used to reading. When I told Munif this he chuckled and his hands gestured in despair. Despite his enormous popularity with ordinary Arab readers and literary critics (the late Edward Said was one of his biggest fans) he was not feted and celebrated by officialdom. He was proud of this fact.

I met him in the flesh only once, when he came to London on a rare visit to be interviewed for a documentary that I was producing for Channel Four in the mid-Nineties. Why, I asked him, had he chosen the title Cities of Salt for his master work:

Cities of salt means cities that offer no sustainable existence. When the waters come in, the first waves will dissolve the salt and reduce these great glass cities to dust. In antiquity, as you know, many cities simply disappeared. It is possible to foresee the downfall of cities that are inhuman. With no means of livelihood they won't survive. Look at us now and see how the west sees us.

The 20th century is almost over, but when the west looks at us, all they see is oil and petrodollars.

Saudi Arabia is still without a constitution; the people are deprived of elementary rights. Women are treated like third-class citizens. Such a situation produces a desperate citizenry, without a sense of dignity or belonging.

He was not in the least surprised that the majority of the 9/11 hijackers were Saudi citizens. After all he had been warning us of what might happen for the previous four decades. His most recent work was a set of essays on Iraq. He had despised Saddam Hussein and written of the need for social democracy throughout the Arab world, but he was angered by the war and occupation. His son, Yasir, whom I met in the states a few months ago told me that the re-colonisation of Iraq had re-ignited his old father's radicalism and this is obvious in his last essays. The new situation had forced him to put his fiction aside and wield his pen as a weapon against local dictators and imperial warmongers alike.

But it is as a novelist that he will be missed the most. He was a storyteller without compare, who enriched the culture of the Arab world as a whole. He was a strong and independent-minded intellectual who refused to bend the knee before Prince or Colonel. His work and his example inspired younger writers, both men and women, throughout the Maghreb and the Mashreq and, for that reason, I am almost sure we will see his like again.

Tariq Ali's latest book, Bush in Babylon: The Re-colonisation of Iraq, is published by Verso.